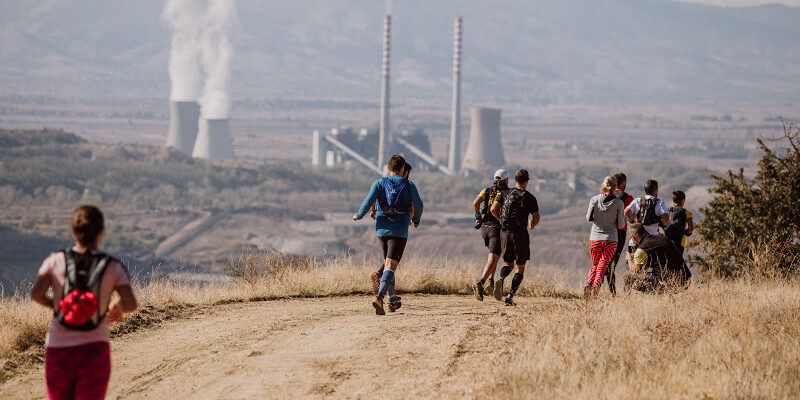 The countries in the Balkans are among the worst in Europe when it comes to air pollution. The annual average concentrations of pollutants in the air are several times higher than those recommended by the World Health Organisation. Because of this, thousands of lives are lost in these countries every year due to polluted air, and thousands more develop chronic respiratory and cardiovascular diseases.

Why the Lung Run?

Bankwatch has been engaged in air pollution monitoring work since 2016. Through independent air quality monitoring, we make the “invisible” visible and draw attention to the connection between the burning of coal in power plants and the health impacts on locals from the resulting pollution.

Exposure to air pollution depends on various reasons. Outdoor sports can be one of the reasons, as they disproportionately expose people to air pollution, for the simple reason that lungs are gasping for more air and more of the pollutants are inhaled.

In an effort to bring more attention to the health impacts of air pollution, we organised a trail race in which runners, a group that spends lots of time outdoors, took on the task of making the pollution visible. The Lung Run was designed in a way that gave runners a small taste of what living in the shadow of a coal facility means. They monitored pollution levels on the course, measuring personal exposure to draw  attention to the need for continuous air quality monitoring near coal power plants.

The municipality of Novaci in North Macedonia seemed like the perfect location for the first edition of The Lung Run. It is home to one of the worst polluting coal-fired power plants in Europe, REK Bitola, which is accompanied by two open-pit lignite mines and an ash disposal site. At the same time, the municipality is blessed with rich agricultural land and breathtaking landscapes in the hills surrounding the plains.

The area has also become somewhat of a hotspot for outdoor sports. Neighbouring municipalities host a number of events every year, including trail races, cycling events, climbing and paragliding competitions. But all of these take place within a 40-kilometre radius of the towering chimneys of the power plant that constantly blanket the area with pollutants.

Like most things in 2020, the Lung Run did not go according to the original plan. Because of restrictions on gatherings in N. Macedonia put in place during the week of the race, the event in Novaci had to be cancelled. Instead, all participants were asked to do their runs on a location of their choosing in a virtual event.

69 runners from 14 countries joined in this inaugural edition. Twelve runners travel to Novaci and ran part of the originally-planned course while using personal pollution sensors. In near perfect weather conditions, these twelve runners completed 20 kilometres in the hills above the power plant and the coal mines.

While they enjoyed the set route, they also pointed out that the smell of burning coal was overwhelming at times and that it was terrifying to see how the open-pit mines dominate the landscape. In the end, runners concluded that this was an eye opening experience and every single participant asked to participate in future events.

Runners that couldn’t be in Novaci but participated anyway were happy they had the chance to support the cause. Felix, a computer scientist from Berlin first heard about the idea from a friend and decided to run five kilometres along the Spree. Felix wanted to support the locals in their fight for cleaner air because air pollution does not respect borders. The decentralised race was great because ‘everyone could take part, even if they did not live in N. Macedonia.’ Felix said he was surprised to ‘learn how much pollution I was breathing-in while running only this small distance.’

While she was closer to the actual race, Slavica could not make it to Novaci and instead ran in the nation’s capital. For her, the virtual race was about showing solidarity with the communities in Novaci and an affirmation that ‘breathing clean and fresh air is everyone’s right.’ Though the weather didn’t cooperate for her run – it poured the whole day – Slavica’s spirits were not dampened: “Alone we can do so little, together we can do so much.”

All these runners became part of our growing community on the sports platform Strava and will continue to be advocates for cleaner air. We are hopeful that this will become a wide movement of outdoor athletes and enthusiasts. Everyone is welcome to join the club of people that are dedicated to fighting air pollution through sports.