MEP Georgi Pirinski, rapporteur of the annual report on the European Investment Bank, shares his views on how to improve the way the bank operates. 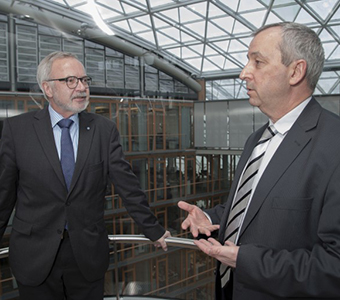 This article first appeared on the Counter Balance blog

Georgi Pirinski started his first term at the European Parliament in July 2014 where he represents the Bulgarian Socialist Party. As rapporteur of the annual report on the European Investment Bank (EIB) for 2014 he shares his views on how to improve the way the bank operates, with a special emphasis on the need to contribute more to the cohesion objectives of the European Union.

How did the EIB – historically not the most visible of EU institution – catch your attention?

I gladly applied for the rapporteur’s position because clearly the EIB has a very substantial role to play in getting growth back on track, making a contribution to overcoming the so-called „investment gap“, as Europe has still not recovered its investment level from pre-crisis times. Besides, the European Fund for Strategic Investment (EFSI) was of particular interest – as an opportunity to bring investments in Europe – up to Bulgaria.

What are the most striking issues you came across as rapporteur on the EIB?

Firstly, the way the bank reports its activities is not quite satisfactory. While some reports are put together almost as a public relation presentation, others have a highly technical bend. There is a lack of a comprehensive annual report which would, in a substantive way, make an overall assessment of the annual activities of the bank. For this purpose, from this year on the Parliament has asked a new harmonised annual report to be prepared. We will monitor how it works.

The second issue is that there is room for greater transparency and accountability at the EIB. The bank needs to take commitments to address concerns that NGOs like Counter Balance have been putting forward. This includes concerns on projects‘ selection and the attention paid to irregular activities, corruption, even criminal activities, as well as the very sensitive issue of tax evasion. While the bank repeats that it is aware of the seriousness of these issues and committed to tackling them, the fact that those questions keep arising means that the EIB has to pursue its efforts and even do more.

The report adopted in April recognises the key role such public bank should play in Europe. But it also featured several critical assessments. What would be your overall assessment of the role the EIB currently plays in Europe?

I strongly believe that the bank should pay more attention to the part of its mandate concerning economic, social and territorial cohesion. In the Parliament, this was one of the most hotly debated issues. Indeed, in my report I highlighted the fact that the business plan signed in 2014 was implemented with quite an imbalanced distribution: roughly 60% of signatures went to the five largest economies in Europe, while 30% went to the other 23 member states (while 10% goes outside of Europe). The bank’s justification is that these 5 economies account for roughly 60% of the EU population, so they produce the same proportion of gross product.

The same tendency occurs in the functioning of EFSI: newer member states are less prepared to put forward comprehensively prepared investment projects. I think there has to be a much more hands-on approach by the bank. Instead of waiting for these countries to come along with a project, it should go there, sit down with the relevant authorities and discuss how their plans for developing their economies would fit into the overall EU development strategy, and how they can work together to make a sufficient impact so that things start changing.

What is the potential of a European public bank such as the EIB for economic recovery in the EU?

For this specific role, the intention of the Investment Plan for Europe was to unblock capital which was remaining in the financial sector. I don’t think this has really taken off so far. Overall, the EFSI is financing projects that stand more or less within the framework of usual commercial criteria. This is clearly unacceptable, because precisely if we want to generate growth throughout Europe there has to be a very perceptible additional inflow. This is a major challenge for Europe. I don’t think that there is sufficient awareness of whether the approach so far, even with the Investment Plan, has generated the necessary change for a vigorous recovery. I find it worrying and disappointing that the major spokesman of the Commission, the Vice-president, claims that things are difficult, but getting better, and we are on the right track. I don’t think that’s really where we are at.

As a member of the Budgetary Control Committee (CONT), how do you see the role the Parliament should play towards the EIB?

The report explicitly mentions that we should generate an on-going and in-depth debate with the EIB management. This should be a regular exercise of hearings that could have joint committee participation. This would be essential to really try and reinforce an accurate analysis of where we are, what the current deficiencies are, and what the Parliament, together with the Council and the EIB management can do to create the necessary framework for achieving this investment boost.

I think the plenary debate around this report showed such a readiness on a very broad scale. I was surprised to see this extent of very committed participation in the debate.

The report mentions that the EIB has quite some potential to do more and better. Why can the EIB not realise that potential currently?

I think it has to do with the bank’s culture. Throughout the year the bank has been striving to finance major projects that are of significant value and importance for the economies of the most advanced member states, and focusing on maintaining the highest possible credit rating. Overall, this is a cautious behaviour. Of course, there have been developments regarding support to SMEs and activities in the neighbourhood region, but basically the EIB has kept its bankers‘ culture. Such culture should not be forgotten, but clearly it constrains the bank in how it faces current challenges for the European Union. Realising the bank’s full potential means endorsing an overall cohesion, integration and investment driving role.

If you could change one thing in the bank what would that be?

I’m not in a position to bring it down to one silver-bullet solution. But perhaps there has to be a rethinking of the way the Board of Directors functions. While the Board gathers several times a year, it is not sufficiently functional as a body that truly guides the bank. There has to be a substantive assessment of the situation in each member state and of how they all fit together. There has to be a more regular and substantive work from the Directors’ teams, because now the members of the Ministries of Finance get a file on projects to be approved just a few days before the meeting and they only go rapidly through them.