Massive infrastructure for transporting natural gas is shaping up to be a centre piece of the Energy Union put forward by the Juncker Commission. This was also the impression Bankwatch campaigners had at an Energy Union conference in Riga last week. 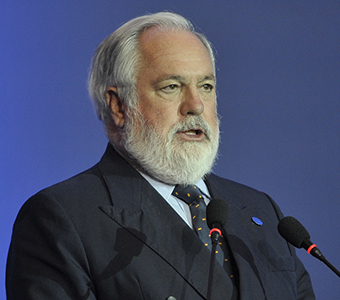 In his speech in the opening panel of the Energy Union conference in Riga on February 6, EU Commissioner for Climate Action and Energy, Mr Miguel Arias Cañete, summarised his priorities for the Energy Union. Evoking a competitiveness – security – sustainability triangle, he said the aim is to “craft an energy policy that will deliver a 40% CO2 reduction by 2030, but does so in a manner that becomes a motor for both competitiveness and energy security”.

Laying out how this could be achieved, his priorities include some positive aspects with regards to sustainability, in particular concerning energy efficiency and grid access for locally produced electricity, i.e. prosumers. Overall, however, I cannot help thinking that they will too easily be overshadowed by a focus on natural gas. In his speech Cañete mentioned among others an EU LNG Strategy, a Mediterranean Gas Hub, strategic alliance with key gas transit country Turkey, the European Projects of Common Interest (PCIs) (that include a large amount of gas infrastructure).

Moreover, Cañete implied that the massive Southern Gas Corridor, a chain of projects meant to bring natural gas to Europe from the Shah Deniz offshore gas field in Azerbaijan, is a done deal – he mentioned in passing that it will be delivering ten billion cubic metres of gas by the end of the decade. There can certainly be no doubt about the political backing that the project enjoys, but to be clear, the Corridor is facing numerous challenges and is far from shovel-ready in its entirety. The Trans-Adriatic Pipeline from Greece to Italy for example is (among others) still facing strong opposition (pdf, pg. 21) from regional and local administrative bodies.

In its recent study Pipe Dreams – why public subsidies for Lukoil in Azerbaijan will not reduce EU dependency on Russia, Bankwatch raised a number of other issues with the Southern Gas Corridor, most fundamentally the fact that the EU’s own projections suggest that the additional gas imports are not necessary. The project would also turn Azerbaijan into the new gas supplier for Europe, thus strengthening Aliyev’s authoritarian regime.

Still, the role of natural gas in achieving the EU’s Energy Roadmap 2050 seemed to be shared by a majority of participants at the conference in Riga. How reasonable it is to invest in gas infrastructure that will be ready in 10-15 years while the share of renewables should be two thirds by 2050 is still left without answer.