Home > Blog entry > No more (EU) sweeping under the rug!

Bankwatch’s waste expert, analyses the draft EU Resource Efficiency Roadmap released by the Commission this month. A good start, but much more is needed, says Galovic. 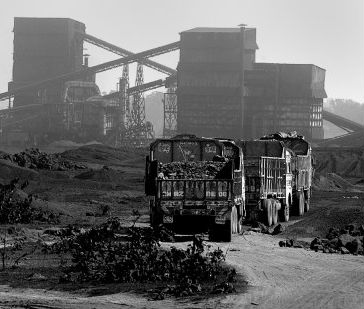 Have you heard about the Great Smog of 1952? It was a severe air pollution event that affected London more than half a century ago. Cold weather and no wind meant that airborne pollutants – produced primarily by coal plants – formed a thick layer of smog over the city. It is estimated that 4,000 people died prematurely and 100,000 others were made ill because of the smog’s effects on the human respiratory tract. This tragic event led to important legislative changes, including the Clean Air Act of 1956.

Today, the air in London and other Western cities may seem cleaner. But the truth is that the “smog” has been sent to poor countries: polluting factories have been relocated to developing countries with laxer environmental regulations; lower labour remuneration and ignoring pollution in calculating production costs means that Western consumers can continue to buy cheap while people in developing countries are chocking and falling sick in their place. The European Union today – with its open economy – relies heavily on imported raw materials and energy.

But we cannot continue to play the game of hiding the “smog” out of sight. The planet is one, and no matter where we shift pollution costs, the pressure human society is placing on nature has become unbearable. The brunt is now borne by the world’s poorest, who are also consuming the least. This is a deeply unjust situation that needs severe remedy.

The era of plentiful and cheap resources is over. Minerals, metals and energy, as well as stocks of fish, timber, water, fertile soils, clean air, biomass, and biodiversity are all under pressure. Whilst demand for food, feed, fuel and fibre may increase by 70% by 2050, already today 60% of the world’s major ecosystems that help produce these resources have been degraded or are being used in an unsustainable manner.

The first inspiring thoughts about a Resource Efficient Europe came from Environment Commissioner Janez Potočnik who stated : “We are serious about making Europe a resource efficient economy as we set out to do in the Europe 2020 Strategy. This is not just about reducing negative environmental impacts and green house gas emissions, it will also create jobs; in the waste recycling sector alone half a million jobs could be created”. Only shortly after that confession, UN secretary general Ban Ki Moon said: “For most of the last century, economic growth was fueled by what seemed to be a certain truth: the abundance of natural resources. We mined our way to growth. We burned our way to prosperity. We believed in consumption without consequences. Those days are gone. In the twenty-first century, supplies are running short and the global thermostat is running high.” These acknowledgements from some of the world’s most important leaders now need to be followed up by deeds.

A small step in the right direction could be the EU Roadmap to a Resource Efficient Europe, a document currently under review and to be adopted in the fall. If prepared properly, this document could play a part in turning Europe into an economic system which allows us to create more with less – without such a shift, the road ahead is doomed.

According to a draft roadmap prepared by the European Commission’s environment department, the EU is intent on actually setting resource efficiency targets for the block by 2013. This is good news.

Nevertheless, our colleagues from Friends of the Earth argue that the roadmap does not seem to take into account the impact of EU’s material use outside of its borders through the supply chain: indicators based on domestic material use do not give a full picture of real consumption and waste. According to the European Environmental Agency (EEA) 2010 State of the environment report, “Despite significant efforts to reduce emissions, air pollution continues to cause damage to people’s health and the environment. Current concentrations of fine particles cause 500.000 premature deaths in the EU and immediate neighborhood.” These facts are surprisingly worrying, but what is even more worrying is the unknown number of premature deaths caused by pollution in developing countries where the factories, mines, fisheries, agricultural fields and forests producing the goods consumed in Europe at the moment are actually located.

Agreeing with the FoE remarks, what has CEE Bankwatch been doing to improve the quality of this document?

After our initial communication with European Commission President Juan Manuel Barosso from January 2011, in May this year, we warned that EU climate targets cannot be achieved in the absence of binding energy efficiency and sectoral resource efficiency targets, backed up by appropriate financial support.

Analyzing the evolution of EC documents on resource efficiency makes us think that, indeed, we have made an impact on the Commission’s thinking on the matter: some of our major concerns were seriously considered and taken into account. For example, some of the technological solutions previously prioritized at EU level were carbon capture and storage (CCS) and nuclear energy, which – after serious opposition from Bankwatch and other NGOs — are nowhere to be found in the new versions of the documents. This is quite a success and we do hope that these technologies will never find an open door to come into the strategy again.

On waste, we have been advocating for more than five years for fair funding opportunities for waste management projects. The new EC communication states, “Ensure that public funding and particularly EU funding supports the move up the waste hierarchy (e.g. support recycling plants rather than incinerators).” We are happy to see this in the document because implementing the waste hierarchy is indeed the right way to bring truly beneficial environmental effects. The second important target of our advocacy has been higher recycling targets (70%) for EU member states. In its draft roadmap, the EC has announced — even though in vague wording – that it would review existing prevention, re-use, recycling and landfill diversion targets in order to move towards an economy based on recycling, with residual waste close to zero.

Right, this is more than we expected. But for now it is vague wording. From here, the long struggle begins to make sure that this intention is turned into a strong commitment, and that it is then implemented by the member states. Even more, we have to make sure that such an ambitious target is supported through proper and fair financing mechanisms, rather than through dubious instruments that have failed to provide results in the past such as public-private partnerships (PPPs) — for which the European Investment Bank is continuously lobbying to get included in the Resource Efficient Europe Strategy.

All in all, we are pleased with this first effort from the Commission. But between words and deeds there is a long distance and oftentimes the devil is in the details. We hope that the final Resource Efficiency Roadmap to be presented this fall indeed moves Europe in the direction of less consumption and waste.