With an ownership structure heavily influenced by Azerbaijan, the European Commission’s flagship energy project may end up being a costly piece of infrastructure that does not increase Europe’s energy security but offers a tool for political leverage to the authoritarian Aliyev regime. 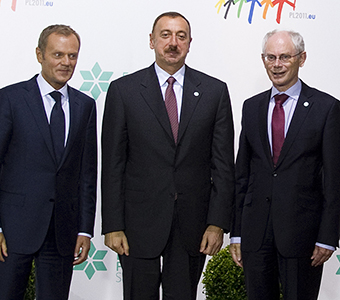 Proponents of the Southern Gas Corridor, a system of pipelines meant to bring gas from the Caspian region to Europe, have one more reason to celebrate at tomorrow’s ground-breaking ceremony of the Trans-Adriatic Pipeline (TAP), the Corridor’s end piece, in Greece after the European Bank for Reconstruction and Development (EBRD) announced that it considers a record loan of EUR 1.5 billion for the project, increasing the possible public funding for the Southern Gas Corridor to at least EUR 7 billion.

The Southern Gas Corridor has been promoted by the European Commission as a key infrastructure project to secure the European Union’s energy supply and reduce its dependence on particular gas suppliers, most notably Russia.

With a planned volume of initially 10 billion cubic meters (10 bcm) annually and up to a fanciful 80-100 bcm in the future, the pipeline system indeed opens up a new supply route. But with an ownership structure heavily influenced by Azerbaijan, it may end up not increasing Europe’s energy security but becoming a costly and useless infrastructure that might even put a tool for political leverage in the hands of the authoritarian Aliyev regime.

The four puzzle pieces of the Southern Gas Corridor (SGC) – the Shah Deniz stage 2 gas field in Azerbaijan, the South Caucasus Pipeline extension (Azerbaijan-Georgia), the Trans-Anatolian Pipeline through Turkey (TANAP) and the Trans-Adriatic Pipeline (TAP) through Greece-Albania-Italy – are not only prioritised in the EU’s foreign and energy policies, but also slated for extensive EU public finance support and favourable legal and tax rules.

The European Investment Bank (EIB) is considering loans worth EUR 1 billion for TANAP and another mind-boggling EUR 2 billion for TAP, which would be the biggest single investment by the EIB. In addition to the announced EUR 1.5 billion for TAP, the EBRD is involved in a range of loans (in cooperation with other lenders) over almost USD 1.2 billion for Shah Deniz (here and here) and is also rumoured to consider support for TANAP. The World Bank is expected to decide in July over a USD 1 billion loan for TANAP.

In addition to public loans, TAP was also granted a favourable 25 years tax deal for the Greek section which, as a state aid measure, has been recently approved by the European Commission.

Azerbaijan’s strong grip on the infrastructure

With such massive taxpayer-backed support, Europeans should expect (and are made to believe) that the Southern Gas Corridor will provide Europe with secure control over a large portion of its gas needs. Yet none of it is the case.

So far, only gas from Azerbaijan’s Shah Deniz gas field is slated to come to Europe through the Southern Gas Corridor. To add gas from other countries in the Caspian Region and beyond requires more pipelines and further negotiations with potential suppliers (Turkmenistan and Iraq have been mentioned among others). Even the energy agreement between the European Union, Azerbaijan and Turkmenistan is currently stuck.

In 2013, TAP has been granted an exemption from third party access – an EU rule to avoid monopolies and improve competition which requires energy infrastructure to be accessible for other suppliers to access the infrastructure. For 25 years, the owner of the TAP pipeline – the TAP AG, of which SOCAR owns 20% – will have exclusive rights to use the initial capacity of 10 bcm of the pipeline. In practice this means that the only gas delivered to Europe through TAP until roughly 2045 will come from Azerbaijan, unless the pipeline capacity will be increased before then, which so far is still written in the stars.

According to the EIB’s project summary, also TANAP has been granted special or exclusive rights while operating in a non-liberalised market. Both TANAP and TAP are considered public sector projects, subject to EU procurement procedures. Yet, not a single public EU entity will be able to control the infrastructure and its availability to other gas suppliers.

At the same time, SOCAR is still set to purchase a 49% share of the Greek national gas transmission and distribution operator DESFA, who will be responsible for the day-to-day operation of the Greek TAP section, ensuring the reliability of gas transmission and maintenance. (The size of the share had been reduced from the initial 66% for which SOCAR won a tender in 2013 after the European Commission intervened, demanding 17% to be sold to European operators.)

If Azerbaijan’s regime decides to shut off supply or if political upheaval results in disruptions, the risks for Europe’s energy supply will be very limited. But without the gas from Azerbaijan, one of the most expensive pipelines ever will simply be useless.

In fact, even a look at the EU’s own gas demand data shows (pdf) that Europe will not need the gas and that building a pipeline of such proportions is a waste of money.

Which begs the question why supplying a maximum of 2-3% of the EU’s import needs with Azeri gas, through infrastructure under strong Azeri influence, becomes one of the EU’s biggest flagship projects ever?