Demonstrations in Kiev have shown that road safety is not only for cars but also pedestrians and other traffic participants – a lesson that the Ukrainian road company still needs to learn and that the European Bank for Reconstruction and Development should be teaching more actively. 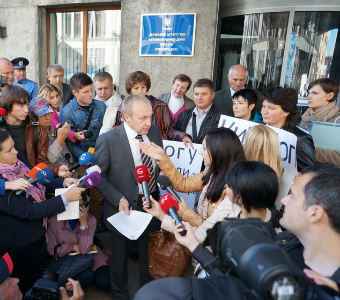 There is a joke about Ukrainian roads in which a German, a Pole and a Ukrainian person are being asked which country has the worst roads. The Ukrainian immediately suggests Poland, making the Pole wonder: “Why is that? Do you have such good roads in Ukraine?” To which the Ukrainian replies: “We have no roads in Ukraine.”

Roads in Ukraine do exist, but many are in urgent need of repair and upgrade to European safety standards. A good thing then that European multilateral banks can finance these works and bring “European standards” with them, right? Not exactly, unfortunately, as protests in Kiev have highlighted this week.

On Monday, under the eyes of a big number of media representatives (see images below), villagers and activists demanded from Ukraine’s state-owned road company Ukravtodor to create safe conditions for pedestrians along the M06 Kiev-Chop road.

Activists with toy steering wheels were running in front of Ukravtodor’s office, colliding with surprised passers-by. The action was to demonstrate the everyday life in the village of Bolyarka where one can be hit by car at any moment when going to the shop or to work – because people in Bolyarka have no choice but to walk on the street with cars and heavy trucks speeding by.

The street passing through Bolyarka is the M06, a crucial connection between Kiev and the West that has been upgraded with the help of almost half a billion euros from the European Bank for Reconstruction and Development and the European Investment Bank. While the upgrades have increased driving comfort and allowed higher speed, the Kiev-Chop road has not become safer, especially not for local villagers. In Bolyarka the situation is especially dire:

Last year, after Bankwatch member group NECU brought the situation in Bolyarka to the attention of the EBRD (pdf), the bank conducted a safety audit not only of Bolyarka and other villages that we had identified but of the entire M06-road (pdf). The audit’s result confirmed the lack of safety.

A year later, the situation remains unchanged. The only concrete measure taken to create safer road conditions in Bolyarka was the reduction of the speed limit from 90 to 60 km/h. (Even though drivers keep speeding at 120 km/h as villagers told me.) Other than that, Gulsan, the contracting firm that built the road, is refusing to finish pedestrian crossings because Ukravtodor owes Gulsan money. And the EBRD seems to be incapable of putting enough pressure on Ukravtodor to make sure pedestrian crossings, sidewalks and the necessary conditions for horse carts are being created.

Instead, the EBRD hired consultants to train local communities to coexist safely with the road. The results: about 300 people in Bolyarka received two small reflecting signs to warn car drivers and farmers were handed “high-visibility jackets” with reflectors along with information leaflets on road safety.

These measures seem almost laughable compared to the danger on the street and the money involved. On average, one cyclist and five pedestrians are being killed in accidents every day in Ukraine, and almost all of these accidents happen on highways. (In light of this it would have been no surprise had the people from Bolyarka turned up with a pile of horse manure to remind Ukravtodor of the situation in their village.)

A lessons for the EBRD to take from this is that in order to provide added value by introducing European safety standards it needs to better monitor the implementation of its projects (especially after receiving warnings from civil society) and accordingly put more attention on the interests and safety of local people. 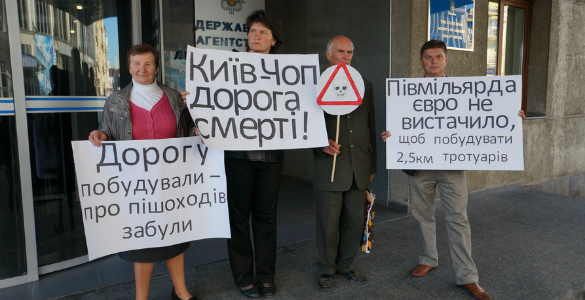 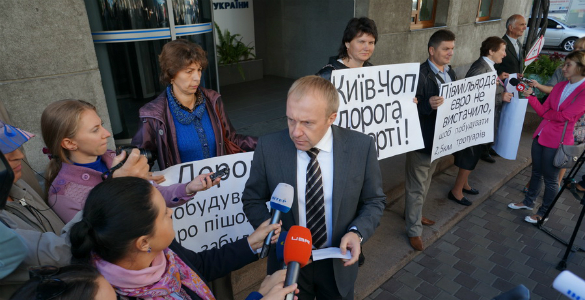 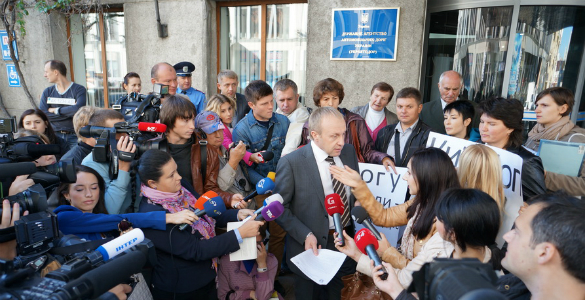