In the Israeli Environmental Protection Ministry’s annual ranking, Israel Chemicals has been topping the lists of corporate environmental offenders. For the EIB, the company has “sound environmental policy” which justifies a quarter of billion euros for supporting R&D of specialty chemicals. Ahead of the first anniversary of the Ashalim spill, which originated from an ICL subsidiary’s chemicals plant, a new Bankwatch analysis questions the EIB’s engagement with the company. 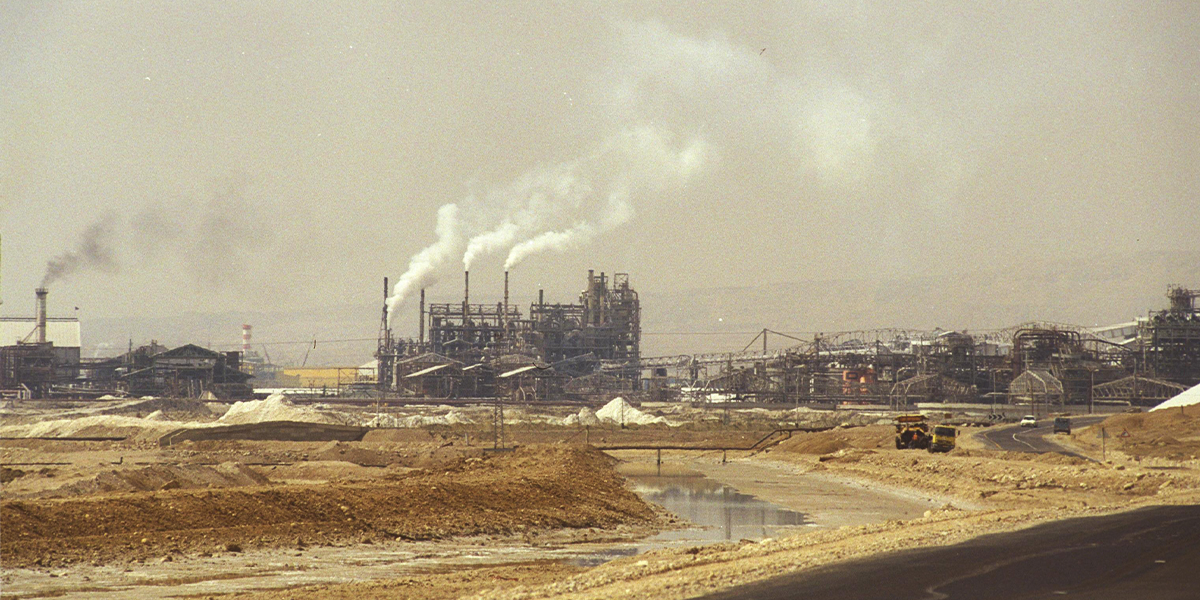 The European Investment Bank (EIB) doesn’t miss a chance to boast about its green credentials. The world’s largest lender does have some of the more stringent social and environmental standards among international financial institutions, but sometimes it seems there are light years between the bank’s policies and the situation on the ground.

Such is the case with Israel Chemicals (ICL), a multinational corporation that is widely known in Israel for its dubious environmental track record.

Israeli environmental groups have long warned about the toll ICL’s subsidiaries in Israel have taken on the local environment – be it the contribution of Dead Sea Works to the rapid and continued decline of the Dead Sea, or the years-long pollution of the popular Bokek stream from Rotem Amfert’s factories in the Negev desert.

Rather than becoming a green and clean business, last year ICL seems to have managed to break its own record of disregard to the environment.

Over the past decade the EIB has awarded ICL two generous loans aimed at supporting research, development and innovation related to fertilisers and speciality chemicals in the company’s different facilities in Israel and abroad. Among their stated objectives, these investments – totalling more than EUR 230 million – were supposed to help improve the so-called environmental performance of ICL’s existing products and processes.

But rather than becoming a green and clean business, last year ICL seems to have managed to break its own record of disregard to the environment. In June 2017, one of the wastewater pools in Rotem Amfert’s Mishor Rotem plant collapsed and a wave of highly toxic wastewater spilled into the Ashalim dry stream that’s located within a desert nature reserve, decimating the local wildlife, including a third of the local Nubian ibex population.

Bankwatch has obtained documents related to the two loans ICL had received from the EIB, and their analysis, summarised in a briefing released today, reveals that the bank has failed to assess and acknowledge the company’s environmental performance.

In fact, the EIB’s supposedly rigorous due diligence checks appear to have missed even the most obvious red flags. Since January 2013 the Israeli Environmental Protection Ministry has recorded dozens of environmental infringements in ICL operations across the country, and both ICL and Rotem Amfert have even been ranked by the ministry’s Environmental Impact Index among Israel’s top environmental offenders for several years.

The EIB’s supposedly rigorous due diligence checks appear to have missed even the most obvious red flags.

Yet, the EIB’s environmental assessment for the loan approved in November 2016 stated that “ICL has a sound environmental policy, including commitments to comply with legal requirements, prevent pollution, continual improvement, regular audits and annual report of its environmental performance.”

In response to Bankwatch’s queries, the EIB indicated that this assessment was based “on the situation that could be observed during the Bank’s appraisal visit in Israel, and on publicly available documents, such as for example the [Corporate Social Responsibility] report that is annually published by the promoter and was also discussed during the Bank’s appraisal visit.”

This response raises concerns that, despite the EIB’s policies, its evaluation of ICL relied almost only on information it had received from the company itself.

Similarly, the document that the board members received from the bank’s management before deciding on the loan, mentioned nothing about the two companies’ poor environmental record. In fact, it even concludes that ICL’s operational risk, assessed as “medium,” is “mitigated by the promoter’s compliance with stringent environmental procedures and stringent policies it has put in place.”

So it is also unclear whether ICL has notified the EIB of the Ashalim disaster – or the multiple initiatives for class action that followed, most recently by the ministry itself – even though the loan contract requires it to do. If it did, the bank has never indicated to Bankwatch that it had taken any measures in response.

This case casts a serious shadow over the EIB’s appraisal mechanisms, and possibly also its oversight of the projects it finances. And it is of particular concern given that the same failures appear to characterise two successive and similar projects, or as the saying goes, “fool me once, shame on you; fool me twice, shame on me.”

The EIB’s loans to ICL were guaranteed by the EU’s funds under the so called External Lending Mandate, created to help the bank support sustainable projects outside Europe. Bankwatch has documented at least several projects covered by this instrument with questionable quality and performance in terms of transparency, human rights and environmental due-diligence.

In a recent communication on a new Neighbourhood, Development and International Cooperation Instrument, the European Commission presented a plan for a better alignment of the EU’s external action with environmental principles and sustainable development goals. Should this be enough to prevent similar operations as ICL loans it is yet to be seen.