A look at mining projects in Kyrgyzstan and Mongolia reveal a need to carefully revise the European Bank for Reconstruction and Development’s involvement in the exploitation of natural resources. 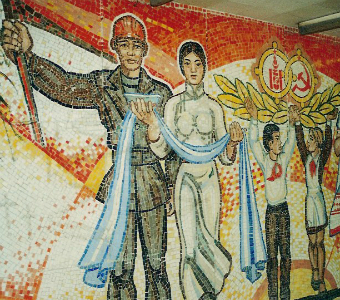 To say the mining sector policy of the European Bank for Reconstruction and Development decides over the fate of people in Central Asia and central and eastern Europe would probably be exaggerated and certainly too simplistic. But the bank has been encouraging numerous mining projects in the region over the past two decades and it is no secret that the exploitation of natural resources, especially in emerging and developing nations and especially by western companies, is a controversial topic.

The extractive industry can very well contribute to a country’s economic development and bring desired employment and revenues. At the same time mining is a highly disruptive activity with considerable negative impacts on the environment and the livelihoods of local communities. In countries with underdeveloped democratic structures, lack of institutional capacity or simply corruption, the damages can quickly overweigh. Benefits can then bypass the local level and end up enriching the involved companies and – not least – the technological progress and wealth in developed nations.

So a clear strategy for the EBRD’s engagement in the mining sector indeed bears no small meaning if they decide over whether or not to support investments that may end up hurting people and their livelihoods, damaging local environments and/or adding to climate change.

To the shame of the bank, it hasn’t updated its guidelines for metals mining since 1999! [1]

In the meantime the EBRD and Bankwatch have disagreed over the benefits of several mining projects, with the bank favouring the interests of its clients over the concerns of NGOs and local communities.

Gladly, the EBRD is finally working on a new Mining Operations Policy. But reflecting on EBRD projects from Kyrgyzstan and Mongolia, I can’t help but think the bank needs to consider very carefully and very fundamentally the role it wants to play in that sector. Surely, the bank has made mistakes in the past and, looking ahead, the stumbling blocks for mining projects that contribute to a development beyond GDP growth won’t just disappear.

Bankwatch will publish two reports next week, which will offer in-depth examinations of the impacts of EBRD-supported mining developments in these two countries. (Subscribe to our blog to stay updated.)

Kumtor gold mine – EBRD mining past and present

The Kumtor gold mine is an enormous – and enormously profitable – mine in the Kyrgyz Tian-Shan mountain range, an environmentally extremely fragile area with two glaciers, nearby national parks and a transboundary river. (I’ve uploaded some images from my visit there on flickr.)

Being supported by the EBRD since 1995, the operator of the mine Centerra Gold has neglected worrying environmental impacts, among others on the glaciers. It has also not been taking full responsibility for the damages that several accidents at the mine have done to the local population. Moreover, revenues for local authorities have been avoided [2], leaving only limited opportunity for jobs for people in the communities nearby.

In its communication with civil society, Centerra Gold has been nontransparent and unresponsive and the EBRD has not done enough to improve that. On the contrary, the bank has more than once been too uncritical about persisting problems and too trusting in Centerra’s “self-monitoring”.

And the story goes on: Centerra Gold managed to have another loan approved by the EBRD in November 2010 (a revolving debt facility from which the company hasn’t drawn funds yet).

Our report on Kumtor (to be published January 31) will take another close look at the project, its local impacts and at information which the company has been trying to keep away from public scrutiny.

Mongolia – the future of EBRD mining?

Unexploited natural resources in Mongolia (coal, copper, gold, and more) are so plenty that the country’s economy is estimated to grow at fantastic rates in the near future (14 percent on average between 2012 and 2016 and one quarter in 2013 alone).

Whether the promised revenues will help Mongolia to develop badly needed welfare services and build an economy that can sustain the depletion of its resources or sudden changes in commodity prices is an open question however. The dominance of the mining sector has already raised fears of a “dutch disease” or “resource curse”.

In terms of local impacts, water scarcity is the biggest issue: Mining companies like to point out that aquifers are abundant and unrelated to shallow water sources. The fact is, though, that there is just no clear evidence whatsoever – neither for nor against a danger of impacts on water sources. The current practice of first come-first served may well result in an unpleasant awakening in a few years (for the local population more so than for the mining companies).

Now coming to the EBRD, the bank finances the Ukhaa Khudag coal mine that’s within the Tavan Tolgoi coal deposit and examines a potential investment in the Oyu Tolgoi gold and copper mine project. Both are located in the South Gobi region and near the Mongolian-Chinese border. Additionally, in December the Bank approved a USD 350 million loan for the Tsagaan Suvarga copper mine and is about to decide next week on a 55 million loan and equity investment in the Tayan Nuur iron ore mine.

Leaving the issue of financing coal production aside (we’ll come to that in a later blog post), the EBRD should be very careful not to contribute to Mongolia’s potential overdependence on commodity exports. To illustrate the bias towards natural resources: Total EBRD investments in Mongolia were EUR 338 million by the end of 2010. The loan to Tsagaan Suvarga from 2011 alone will double that figure. With an equally sized investment in Oyu Tolgoi (pdf) in the 2012 project pipeline it will be hard to strike a balance in the EBRD portfolio with minimal investments in other sectors of the Mongolian economy.

Rather than following the trend that’s anyway happening, the EBRD could help Mongolia diversify by diversifying its own portfolio in the country. There are lots of other important areas that need investments in Mongolia and that don’t profit from an international business hype: agriculture, infrastructure, municipal and environmental services.

Our report on Oyu Tolgoi and Tavan Tolgoi will come out January 30 and will take a detailed look at the risks connected to both projects and the lack of sound information on local impacts available to date.

1. Since the EBRD’s Energy Policy of 2006 replaced the Natural Resources Operations Policy of 1999, mining of metals and health and safety issues were in need of separate policy guidelines. Following a recommendation from its evaluation department, the bank now develops a new policy to cover all forms of non-energy related extraction of natural resources.

2. “[T]he companies are exempted from paying any present or future Taxes or any present or future rents payable to any local or national governmental authority related to the use or occupation of land in the Expanded Concession Area. This is a very expansive concession for a government to make to a company. There is neither provision for it to increase, nor any provision for a local authority to tax the land. Further, all direct financial benefits are rendered unavailable to local governmental authorities and agencies.” (Analysis of the Agreement between Centerra Gold and Kyrgyzstan done by the Center for Science in Public Participation)

This post has been updated on January 27, 2012 to correct a citation source.