During the last months, the European Bank for Reconstruction and Development has come out with positive statements about shale gas investments, most recently on Poland – a rather rash endorsement of a controversial technology. 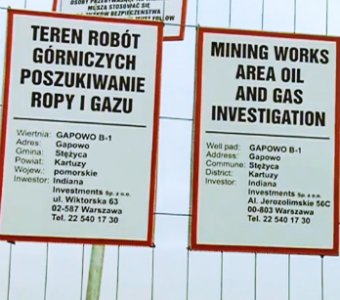 In February this year the EBRD’s managing director for energy and natural resources, Ricardo Puliti, welcomed Shell’s move into Ukrainian shale gas, with a twist on energy independence for the country, while inviting smaller companies to follow Shell for the crumbs. While this doesn’t mean that the EBRD will finance Ukrainian shale gas operations, the invitation may be an indication of EBRD positioning, where it sees itself making some business.

In May, statements from the EBRD’s top banker in Poland, Lucyna Stanczak, gave us more reason for concern. Stating that shale gas is one of the priorities of Poland’s energy policy, she said that the bank could not ignore it. As Reuters reported, the EBRD plans to include shale gas operations in its upcoming country strategy for Poland for the coming three years.

Leaving aside the very controversial debate on shale gas in Poland, my prediction is that at the end of the day, the economics of shale gas (pdf) – which look less and less convincing – will most likely prevent the EBRD from joining such projects. What is this blog post all about then, you ask? In my view, the EBRD’s pitches into shale gas undermine the bank’s efforts to be seen as a responsible investor that chooses the least damaging option.

Considering the water contamination and the (not so small) carbon footprint of shale gas, one can argue that lignite is less damaging. Should this be an excuse then for the EBRD to go and continue financing lignite projects like the Sostanj power plant? Rather not. Choosing between one very harmful fossil fuel and another is a false choice when one should be concentrating on energy efficiency and sustainable renewables. Yet for a “down-to-earth” institution like the EBRD, a marginal improvement can be good enough, as long as it is economic feasible. Business is business, after all.

The EBRD’s energy policy, applicable to all its countries of operation, is currently being revised, with a draft to be open for consultation in June or July. The European Investment Bank is also expected to publish its draft energy policy in June. With statements like these on shale gas (or like others on coal), I’m very curious to see what these European banks have in stock for climate action and public benefit.