The increasing popularity of a ‘low-carbon economy’ rhetoric calls for robust assessments of the carbon intensity of EU funded projects. Otherwise the potential that lies in the concept may get diluted by conflicting interests. 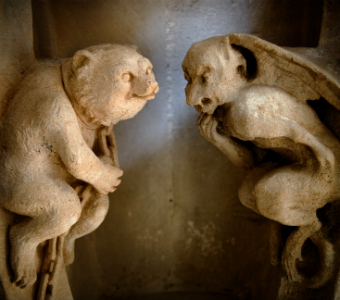 In 2009, former British Prime Minister Gordon Brown heralded the beginnings of a “green revolution” that would be comparable in impact to the Industrial Revolution. The green revolution, said Brown, would lead to a new Ecological era in which the carbon footprint would be the basic criterion for assessing any human activity.

This epochal statement coming from the leader of one of the most carbon-intensive countries in the world is a clear sign that the need to take determined action against climate change has become mainstream. Political discourse has consequently shifted to reflect this new reality, with decision-makers including the concept of “low carbon economy” more and more often in their public interventions. And it is likely that, with the looming threat of climate change upon us, the low carbon economy will remain a top political goal for decades to come.

That is what fossil fuel industry lobbyists encourage us to do, celebrate marginal efficiency improvements while ignoring the fact that dirty production methods persist and might even expand.

The popularity of the low carbon economy among decision-makers is not only caused by environmental imperatives, but also because it is a framework which allows looking at issues such as climate change mitigation, energy savings, efficiency and rational resource use from an economic perspective.

In times of both economic and environmental crisis, politicians like to hear that you can, at the same time and using the same means, fight climate change and environmental degradation on the one hand and solve the problems of a collapsing economy on the other.

Individual members of the Union too are slowly becoming acquainted with the concept. For example, in recently elaborated documents, Slovak authorities have started including the concept of an “economy of green growth”, although for the moment the expression seems to be used in a marginal and rather clumsy manner. But the government has announced it would come up with a “Low-carbon strategy for development until 2030” to be prepared by the Ministry of Environment by the end of this year.

Other countries too, even in Central and Eastern Europe, are slowly jumping on the low-carbon bandwagon, partly to fulfil commitments to the EU and secure European resources.

But a great risk lies in this growing popularity: the concept of a low-carbon economy may become diluted as more and more actors adapt it to their needs. The success of the low-carbon vision will naturally depend on what ends up being categorised as low-carbon.

For instance, the EU gas lobby has been trying to push for having gas included among the low-carbon fuels to receive European subsidies. The coal lobby too has been arguing that carbon capture and storage (CCS) and coal combustion technologies be considered low-carbon measures under the oxymoronic label “clean coal”. Worryingly, the advocates of coal and gas have found support among EU decision-makers and hence there is a real risk that fossil fuel investments could be paid for with EU low-carbon budget funds.

Needless to say that nuclear advocates too present ‘their’ type of power as core to the low-carbon vision, because of its low greenhouse has emissions, regardless of its huge environmental and health hazards.

These examples show what is the danger here. The crux of the matter will be how we measure the carbon intensity of a specific project: if we concentrate only on chimneys and exhausts but neglect the whole production cycle we can come to a grossly distorted picture of what contributes to carbon emissions reductions and in what way. That is what fossil fuel industry lobbyists encourage us to do, celebrate marginal efficiency improvements while ignoring the fact that dirty production methods persist and might even expand. And, for this reason, the European Union and national authorities need to be very careful with how assessments of the carbon footprint of projects are completed, to make sure the entire real impact of the operations is taken into account.

The planning of a low-carbon transition in the EU has started. Despite of still lacking clarity over the concept and its implementation, more and more actors are rallying behind it.

And this is precisely why we should always remember that the problem with new concepts backed by huge amounts of money is that everyone learns fast how to use them – soon, everyone will declare their contribution to a competitive low-carbon economy, and we will be running the risk to make the concept meaningless or even dangerous. It is therefore important to keep a close eye on the evolution of this low-carbon vision and always remember that the devil is in the details.