While drawing concrete consequences from the violence that happened in Ukraine, the European Investment Bank seems to be unmindful of the ongoing human rights abuses and killings in Egypt. 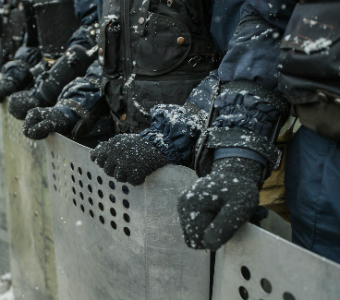 Reacting to the bloodshed in Ukraine, the European Investment Bank announced to freeze its lending in the country last week (while the European Bank for Reconstruction and Development only paid half-hearted lip service). Yet, Mika Minio-Paluello from Platform rightly points out that the EIB’s determination to uphold human rights seems to have a huge blind spot in Egypt.

Mika’s blog post was orginally published on Thursday 20 on the Platform blog and is cross-posted here .

Western governments threatened sanctions and the President of the European Investment Bank (EIB), Werner Hoyer, announced a halt to activities in Ukraine, “I think it would be completely the wrong signal to appear as being the ones who do business as usual in Ukraine while the people on the streets of Kiev, by whom and whyever, are being slaughtered.” The sentiment seem solid – the state crackdown in Ukraine has escalated horribly.

Yet it’s tempting to wonder how much EU geopolitical interests contributed to the rapid decision-making, rather than just the violence in the streets.

Not least given that EIB President Hoyer has no problem conducting “business as usual” in Egypt, where over 1,300 have been slaughtered – “by whom and whyever” – since July. Close to 1,000 were killed on a single day in August. Since then, there have been repeated massacres by state forces. On the third anniversary of the revolution, police attacked those marking the anniversary, killing at least 64 and hounding protestors through the streets. The jails are full with thousands of prisoners, with intense torture becoming routine. The “virginity tests” used to abuse women revolutionaries in 2011 have begun again. Political party members were arrested for displaying “No” signs prior to the constitutional referendum, and schoolchildren imprisoned for making handsigns or carrying the wrong ruler.

What is the EIB’s response to this? Rather than freeze lending, the bank made loans worth €392 million to the Egyptian power, air traffic and banking sector, just since December.

I looked for statements by Hoyer or other EIB officials on Egypt and human rights, democracy – or even just explaining what sig nal they think they’re sending by working closely with a military-appointed government and signing deals in the absence of a Parliament. All I found was the EIB Vice-President’s claim that “Our aim is to support the new Egypt’s social and economic transition by financing projects encouraging growth and employment.”

Which sounds like “business as usual” despite a context where 26 people being killed on one day is so routine that it is barely news anymore. Quite literally. A friend who works for a British paper here in Cairo was told by the editors that stories of massacres in Egypt would only be run if more than 25 people were killed.

Is it just simple racism? Does the EIB weigh up deaths on the scale, and calculate white lives in Ukraine as counting more than brown lies in Egypt? 40 times more?

Or is it also the geopolitics – that the EU is taking a stand to limit Russia’s role in Ukraine? After all, President Hoyer last summer explained that “the European Investment Bank is not a development bank, it is an investment bank designed to support EU policies, including external action.” Hoyer said that just days after the military took power in Egypt.

While in Ukraine, EU foreign policy priorities mean standing up for democracy protestors, in Egypt the protestors are sacrificed on the altar of business as usual. Hoyer explained that he didn’t want to lend in Ukraine “because we need to know in what political environment we are going to be able to move in the future.”

In contrast, in Egypt the political environment is very clear – the military aims to continue running matters from behind the scenes, with some semblance of democracy. The political takeover by General Sisi and the military doesn’t threaten EU business and energy interests. Quite the opposite – Sisi is promising a return to “stability”, albeit enforced by extreme violence.

It’s not surprising that the EIB is comfortable in this environment. The bank was relaxed co-operating with the Mubarak regime right up until the 2011 revolution. Sometimes too relaxed, with evidence that the EIB invested in shadowy private equity funds connected to Gamal Mubarak. So we shouldn’t be too surprised by the bank’s hypocrisy.

None of this is to invalidate the intense violence that is taking place in Ukraine, or to imply that the EIB should ignore the crackdown. Instead, we should hold Hoyer to his new-found commitment to human rights, and his aversion to people being slaughtered in the streets, while challenging the noxious combination of EU’s structural racism and business-driven foreign policy priorities.