It may have been easy in the past for Europeans to bash the US for being retrograde when it comes to climate policies, but after last week it will get more difficult to do that. 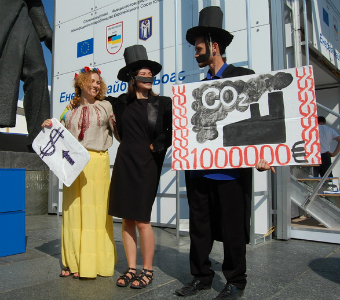 Just as the world is abuzz with Obama’s new climate pledges, below the radar, the European Union’s house bank published draft guidelines for its future energy lending which are actually less ambitious than the US’ when it comes to coal.

Sidelining a reluctant Congress, Obama is going through the Environmental Protection Agency to introduce several important climate friendly measures, including allowing to run only coal plants (new and existing) which meet emissions performance standards of 440gCO2/kWh.

At the same time that most of the world’s media was busy covering these important US developments, the European Investment Bank, the bank of the EU, was bringing to the public a draft of its new energy policy, expected to be adopted by member states of the EU and the Commission, which compose the board of the bank, on July 23.

The criteria inserted by the EIB when it comes to coal are full of loopholes, for instance when “a plant contributes to the security of supply” or “to poverty alleviation and economic development”. Such broad and worn out concepts can end up justifying any kind of dirty energy investments.

The EIB invests up to 70 billion euros annually in EU and non-EU countries, and a significant portion of this money goes to energy projects. Between 2007 and 2011, under the current energy lending policy, the EIB lent 62 billion euros to the energy sector, a third of which went to fossil fuels, according to Bankwatch calculations. 2 billion euros were lent to coal projects in this period: 9 coal plants received EIB financing, in Poland, Germany, Italy, Romania and Greece. Just this year, the EIB finalised a payment of over half a billion euros to the controversial lignite plant at Sostanj in Slovenia.

Some expected that the new energy policy might bring a wind of change at the bank. Many voices have been calling lately for an end of public support for fossil fuels and coal especially, among them the International Energy Agency, the World Bank, and EU Commissioner Connie Hedegaard. The EIB is one of the world’s biggest public lenders so one might expect it to be responsive to this trend. Additionally, the institution was created to further EU objectives, one of which is the decarbonisation of the European economy by 2050.

Against this background, the draft energy policy of the EIB is a disappointment.

The text envisages continued loans to coal projects, albeit under tighter criteria, such as emissions performance standards of 550gCO2/kWh (good that they are there, but they are less ambitious than the ones proposed this week for the US or with those in place in Canada already) and full compliance with EU Directives concerning power plants.

Yet the criteria inserted by the EIB when it comes to coal are full of loopholes. For instance, “an EPS exception” is set out in the policy for cases in which “a plant contributes to the security of supply” within the EU or when “it contributes to poverty alleviation and economic development” outside of the EU. Such broad and worn out concepts can end up justifying any kind of dirty energy investments. This is why, before the board of the bank approves the policy, it must make sure the technical criteria for coal projects are tightened and make emissions performance standards more ambitious.

Worrying is also the fact that the EIB plans on investing in all types of energy, from new renewables, to nuclear and shale gas. This means that the bank will spread out its financial resources among many different types of investments (including costly and controversial options such as carbon capture storage and shale gas) rather than concentrate on those types of investments that guarantee energy resilience and for which potential is immense: new renewables and energy efficiency.

In the policy, the EIB certainly commits to supporting these, but one is left to wonder whether some of the good effects of such investments would not be cancelled out by the bank’s own promotion of lignite or oil pipelines.

Finally, the EIB energy policy is important not only because it determines how tens of billions of euros will be spent over the next five or so years. It is important because, were it to make the right choices, it could build momentum for other institutions in the public sector (such as the European Bank for Reconstruction and Development, also reviewing its energy strategy at the moment) and in the private sphere to follow suit and push for clean energy solutions. But, given the looks of the draft policy, it is hard to imagine how the bank – or the EU for that matter – can be said to play such a leadership role on climate action.