The Maritsa East Complex in Bulgaria, the largest energy complex in South-East Europe, has become notorious in the region and in the European Union for its complete disregard for environmental and social safeguards. 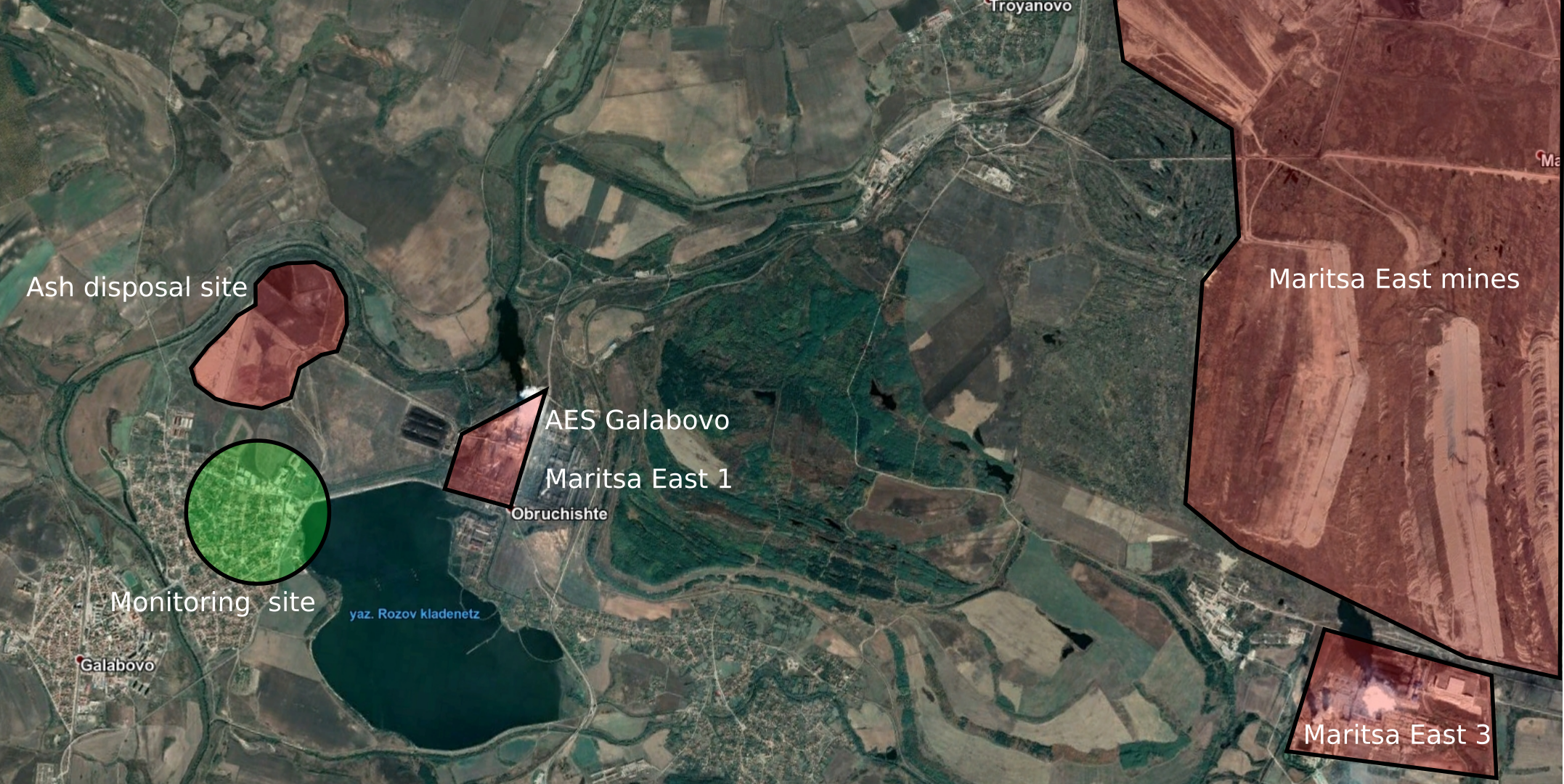 With regularly emerging scandals like the forced resettlement of the Beli Bryag village due to the coal mine expansion, or the burning of waste as a substitute for coal without the necessary environmental permits, the air pollution produced by Maritsa’s dozens of coal facilities is sometimes overlooked. But Galabovo, a town that is part of the Complex, cannot miss it: winds bring its residents only clouds of dust.

Galabovo is a small town in the heart of Bulgaria’s coal region. It is located less than 10 kilometres from the biggest lignite mining operation in the country, Maritsa East, and it is home to two coal-fired power plants. The newer one is the 670 MW plant, AES Galabovo, that started operation in 2011. Right next to it is the dinosaur Maritsa East 1, also known as Brikel, that started operation in 1962. Brikel produces both electricity, with an installed capacity of 360 MW (supposedly only 180 MW are currently in use), and district heating, with an installed capacity of 170 MW, for the town. Both plants are less than 2 kilometres north-east from the outskirts of Galabovo. In addition, the town borders an ash disposal site to the north, which is less than 500 meters from the nearest houses.

Brikel, together with the power plants Bobov Dol and Pernik, is part of the major waste burning scandal currently ongoing in Bulgaria., In 2019, a court ruling found that these plants were using waste as a substitute fuel  without the necessary environmental permits.

With all these capacities around the town, even when best techniques and practices are applied, it is inevitable that the air quality will be affected.

However, the official air quality monitoring station in Galabovo monitors only sulphur dioxide and nitrogen dioxide concentrations and does not monitor coarse (PM10) and fine (PM2.5) dust particles at all.

Bulgaria was already reprimanded in 2017 by the EU Court of Justice over its failure to implement the Directive on Ambient Air Quality (AQD), but it seems that the ruling of the Court, which did nоt involve any fines, has not yet had the much needed dissuasive effect.

We installed our environmental dust monitor in the northern part of Galabovo, about one kilometer from the ash disposal site and two kilometers from the power plants. The location was chosen for its ability to provide some indication of the major sources of dust pollution, in addition to the levels of pollution themselves.

We monitored dust concentrations for 26 days in late Autumn 2019, between 14 November and 9 December, and then compared the results to the AQD and World Health Organisation (WHO) guidelines. According to the collected data, the 50 µg/m³ daily limit from the AQD for PM10 was exceeded on 5 days out of the short 26 day monitoring period (Chart 1). The number of allowed exceedances by the AQD is 35 days in one calendar year, which, given our findings, is very likely to be breached during the winter season.

For the more health-damaging PM2.5, the WHO daily limit of 25 µg/m³ was exceeded on 11 days (Chart 2). This is already several times more than the three annual exceedances that the WHO recommends for proper health protection of the population.

When wind direction and wind speed data are included in the analysis of the high pollution peaks, it becomes visible that high levels of dust pollution originate from the direction of the ash disposal site and from the direction of the power plants. The windroses (Charts 3-6), created using the data on wind direction and wind speed together with the PM10 values, show lines that extend from the monitoring location in the direction of where the wind is blowing. The length of the lines is determined by the changes of the PM10 concentration in the ambient air. The longer the lines, the higher the amount of PM10 originating from that particular direction.

Charts 3 and 4 clearly point to the power plants, which are located between the 70o and 90o marks on the windrose, as seen from our monitoring location.

Charts 5 and 6, on the other hand, show the contribution of the nearby ash disposal site, spread between the 310o and 10o marks on the windrose, to the dust pollution in Galabovo. The situation shown in Chart 5 is especially worrisome, because it shows a huge cloud of dust picked up from the entire surface of the ash disposal descending upon the town.

As dust pollution from coal utilities is inevitable, it is unclear why the Bulgarian government is not monitoring PM10 and PM2.5 in Galabovo. There is a very clear requirement from the AQD that prescribes monitoring of all major pollutants near big industrial complexes such as the ones in Galabovo, so this is something that the government should fix immediately.

But even without measurements of the dust concentrations, it is recommended that ash disposal sites are encircled by a protective tree belt (see Waste Treatment BREF, p. 412) to reduce the spread of fine dust particles rich in heavy metals to the surrounding areas. According to our measurements, the area between the ash disposal site and the town must be recultivated as soon as possible in order to reduce the population’s exposure to dust particles.

At the same time, the Brikel power plant should be considered for shut down soon. It has already worked long beyond its advised economic lifetime of 40 years. Resources needed to reconstruct the power plant in line with environmental standards should be reallocated for solutions that will provide clean electricity and heating from renewable energy sources to Galabovo.