Alstom, the constructor for the Sostanj lignite power plant might just be the worst company of the year. You can vote for Alstom in the Public Eye Awards until January 23. 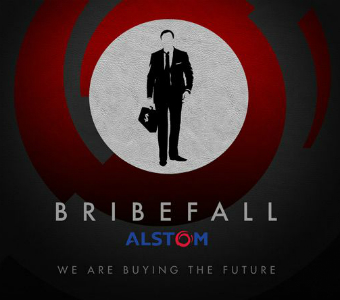 It’s this time of year again, when the Public Eye Awards – a flagship campaign from Berne Declaration and Greenpeace Switzerland – is naming and shaming corporate scandals and bad business ethics among the biggest corporations worldwide.

Among the seven finalists is also Alstom, a company that has been nominated by Bankwatch and our colleagues from Focus Slovenia and SHERPA France for being involved in numerous corruption scandals across the globe.

To set the tone for Alstom’s nomination, we produced this “promotional” video:

Because Alstom and its subsidiaries repeatedly displayed dubious business practices, have faced or are facing corruption charges, fines, even debarment by the World Bank, the French energy and transport giant can now join the ranks of such lustrous figures as Shell, Lonmin and Goldman Sachs, other Public Eye Award nominees this year.

It is indeed a hard choice and whoever will receive the award, it will be well deserved. So if I may, please do have a look at this excellent initiative to stigmatise the world’s worst business practices and cast your vote.

We certainly hope you will vote for Alstom, who is also the construction company for Unit 6 at the Sostanj lignite power plant in Slovenia – yet another corruption case at Alstom’s heels and at the same time a disgrace for Europe’s efforts to mitigate climate change.

Vote now for the worst company of the year.