Repression against civil society is on the rise, as the latest alarming case from Montenegro shows. 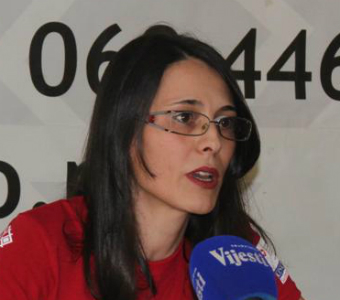 MANS, the Network for the Affirmation of the Non-governmental Sector, has for years been one of the most active and fearless NGOs in Montenegro, uncovering the numerous corruption scandals that plague the country and hinder improvements in the quality of life of its people.

It has long been subject to over-reactions from the authorities regarding its activities, but recent attacks by the Informer ‘newspaper’, considered by many to be close to the Montenegro authorities, have spilled over into the territory of the vile and absurd.

For the second time this year, in late October the ‘newspaper’ published offensive sexual images on its cover page and implied that they portrayed MANS’ Executive Director Vanja Calovic. The first smear campaign, in June, was launched after MANS revealed numerous irregularities, possible cases of political corruption and vote buying at local elections in several municipalities held in May this year. Its publication was a deliberate attempt to compromise her personal and professional integrity.

This repeated smear campaign against Calovic is threatening not only MANS, but also other civil society activists and individuals that dare to reveal corruption and organized crime.

The case is all the more alarming for taking place in an EU accession country, but is unfortunately not the only case, as Bankwatch recently showed. From Hungary to Russia; from Egypt to Azerbaijan, civil society is coming under increasing pressure.

The authorities’ capacity to respond appropriately varies: often the repression is clearly perpetrated by the government. In the ‘Informer’ case, where the smear campaign against Vanja Calovic is at least nominally carried out by the media, government institutions must move fast to ensure freedom of speech and respect of human rights of civil society activists. The Montenegrin government is responsible for ensuring the full appreciation of individual human rights guaranteed by international conventions and the Montenegrin Constitution, including in cases of individuals that are criticizing corrupted behaviour of the government.

We also expect that the new EU commission and Commissioner Hahn who is responsible for Neighbourhood Countries will clearly condemn such practices, and that the EU will back its words with action.