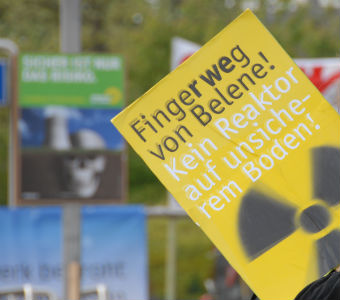 Commenting in 2009, McEldowney notes that the controversial nuke project, slated for construction in an earthquake zone, is dogged by cost overruns, financing woes, construction delays, and now serious safety and quality assurance concerns. Belene may end up costing Bulgaria more than money in the long run.

The high-level revelations thus confirm the concerns consistently raised in recent years by campaign NGOs such as the BeleNE! Coalition, CEE Bankwatch Network, Greenpeace, urgewald, BankTrack and many others in Bulgaria and across Europe. The project-related information described by the US Embassy in Sofia is derived from various sources, including project experts and Bulgarian governmental officials.

The cable also presents the problems experienced by RWE, the German energy utility giant that was involved in Belene as a strategic investor throughout 2007-2009. RWE is clearly feeling ‘buyer’s remorse’ about its participation in Belene. Belene experts said that RWE remains ‘in the dark’ on most on-site day-to-day and technical issues. During a late May 2009 Belene project meeting, RWE asked numerous basic questions, indicating that they have not seen any of the on-site safety and environmental reports.

This confirmation about the project’s serious shortcomings comes during a period of renewed pressure from the Russian government to speed up Belene’s construction. Meanwhile, the British-based bank HSBC has been recently selected as the financial consultant to organise financing for the Bulgarian nuke. In 2009 French bank BNP Paribas pulled out of a similar role following its own fruitless attempts to convince private and public European investors to put up money for Belene.

In parallel, and following invitations from Bulgaria’s prime minister Boyko Borisov to invest in Belene, none of the other countries in the region has as yet confirmed their participation. Croatia has already declared no interest, while Serbia and Macedonia await more documents before taking their decisions. The most damning and credible Belene documentation looks already to have been delivered.

Image: Protests in Germany in 2009 against RWE’s involvement in the project. (Original image CC 2.0 by Bündnis 90/Die Grünen Nordrhein-Westfalen.)