The Asian Infrastracture Investment Bank  is considering a non-sovereign loan of USD 100 million for a 280 MW reservoir-type hydropower plant, located in the Nenskra and Nakra valleys of Northwest Georgia. We would like to provide information about new developments that the AIIB should consider as part of its due dillgence on the project. 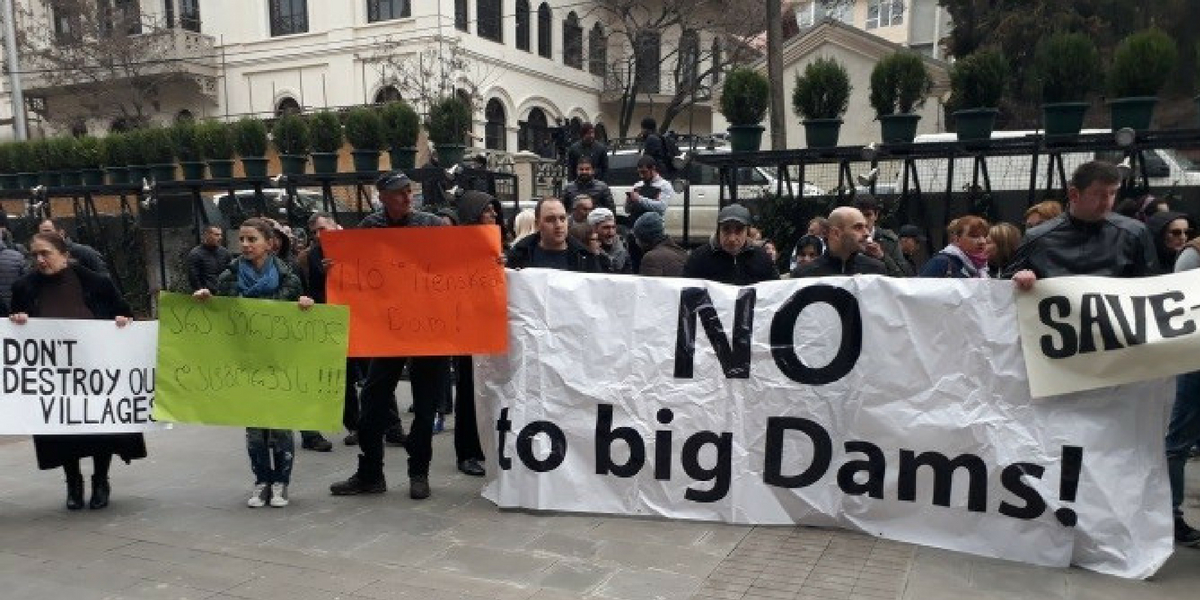 The affected communities complaint to ADB

The affected Chuberi and Nakra community representatives submitted a complaint to the Asian Development Bank (ADB) Compliance Review Panel (CRP) in November 2017. In March 2018, the  CRP found the complaint eligible and defined the number prima face  non-compliances requesting future investigation, including an insufficient assessment of project alternatives,  noise and vibration impacts during construction and operations, health and security risks for the local population, the absence of an assessment of environmental impacts of associated facilities;  The  CRP  report does acknowledge that “the assessment done for this eligibility report is limited in scope…The assessment undertaken in this eligibility report does not comprehensively assess noncompliance by ADB with its operational policies and procedures. There might be other noncompliance issues which are not addressed in this eligibility report. Determinations made by the CRP at the eligibility stage will not, in any way, prejudice its findings after a full compliance review, should that be recommended and authorized by the Board”.

However, the ADB Board of Directors did not recommend further investigation of the complaint. It  requests from ADB management as the most cost effective alternative, to prepare a management response action plan to address all non-compliances and concerns  identified in eligibility report.

However, in the beginning of May 2018, ADB management informed the board that due to significant cost overruns and expected critical changes in the contractual structure, the project is expected to be delayed substantially. In addition, anticipating changes to the technical design, the ADB management has now put the preparation of the Management Action Plan on hold, which was requested by the board on the basis of the CRP report.

Claims by project promoters that the Nenskra HPP project enjoys wide public support are at odds with the reality of the situation.  From its beginning, the project has cause

increased tensions within and among Svan communities in the region. Numerous strikes have been organized since January 2018 both in Svaneti and Tbilisi to protest the dam.  Due to an incident between the company and locals in Chuberi,  Salini Impregilo was forced to halt construction and leave the project area.

The situation escalated so much that on 4 March 2018, a general meeting of all Svan communities (Lalkhor) was called in Mestia, which issued a joint statement on the indigenous status of Svans and demanded that no HPP or extractive projects be implemented without their free, prior and informed consent.  More than 3 000 signatures were collected in support of the declaration. It should be mentioned that according to the recent census only 11000 people are living in Svaneti.

Construction without a permit

On 2 October 2015, the Ministry of Economy issued a permit to JSC Nenskra Hydro to construct the 280 MW Nenskra HPP project with the following technical parameters: 135 metre high and 870-metre-long rockfill dam with a reservoir area of around 400 hectares (182 mln cubic metres) on the Nenskra River and a 13-metre-high dam on the Nakra River in order to divert the Nakra River flow to the Nenskra Reservoir.

The supplementary package includes substantially modified technical parameters of the project – Namely, the height and length of the Nenskra River dam decreased to 130 metres and 820 metres, while the dam type changed to rock-filled with asphalt face. Technical parameters for the Nakra River derivation dam were changed from 13 to 8.7 metres in length, while the diameter of the derivation tunnel was reduced from 4.5 to 3.5 metres.

The Environmental Impact Assessment Law of Georgia requires that in case of any technical changes in the project design a new environmental permit must be issued.  The Ministry of Environment and Agriculture confirmed on 20 March 2018, that JSC Nenskra Hydro has not approached them to begin the screening procedure as it is defined in the Environmental Assessment Code, and was sent to the Environmental Inspectorate for further assessment and reaction.

On 7 May 2018, JSC Nenskra submitted the updated ESIA to the Georgian government with the hope of receiving anew environmental permit. However, the process of project screening in accordance with national legislation was put on hold. The Ministry of Environment stresses that  the screening proposal did  not contain the additional studies required due to the change of technical scopes to the project  In addition, the proposed ESIA lacks Annex 2, the project impact assessment on the emerald network candidate site (under the Bern Convention on Conservation of European Wildlife and Natural Habitats), as it was requested by the Georgian government in December 2017. The new ESIA claims that the project changes would not have any impact on species and habitatsthe cause  for nomination of the site as an emerald network candidate in the first place. There is an ongoing complaint to the Bern Convention Bureau  against the government of Georgia regarding the reduction of the Svaneti 1 candidate site, where the  Nenskra projecy is locayed.  The Bern Convention required numerous documents from the Georgian authorities to address the findings of the biogeographical seminar at the Bern Convention in November 2017, in order to allow the bureau to make a determination on the case by September 2018.

The confidentiality of the contract for the Nenskra HPP is also problematic. Although part of the contract has been disclosed, the information for a proper cost-benefit analysis is missing. Therefore, in contrast to the official documents published by the Georgian government on the Nenskra HPP, the International Monetary Fund fiscal transparency evaluation report on Georgia underlines specific threats to the fiscal stability  of Georgia’s budget and provides alarming data from the Nenskra HPP contract.

According to the IMF, “the main obligation is the government guarantee for a USD internal rate of return (IRR) of 12.5%  on equity investments, which if not paid for could result in the government terminating  the total contract, at a total cost of 800 million USD plus IRR on 180 million USD of equity (6.2% of GDP plus the IRR).  Guarantee is provided in three levels should project revenues fall short, where the first would see regulated prices adjusted in the year following any shortfall (which would costs consumers, but not the government), the second where the Partnership Fund would play any shortfall, up to a maximum  of 54 million USD (for which it receives a guaranteed fee of 2.5 million USD per year from the project), and third, should the government not top up any payments itself, would require the government to buy out the equity in the project (180 million USD) and assume the debt (620 million USD). This exposure is subject to exchange rate risk, and is not discussed separately in the SFR. Unlike most other PPAs, the government has also guaranteed against construction and hydrology risks (up to 30 million USD for the former, uncapped for the latter)”.

The IMF assessment once again underlines the lacking transparency of decision making within the Nenskra HPP contract. Additionally, it contradicts the main principles of the European Energy Community and EU energy directives that Georgia should be implementing in accordance with the EU Association Agreement.

Given the complexity of the Nenskra HPP project and its immense impact on indigenous communities, it is important that before the project continues with any further financial support, the international financial institutions still should:

AIIB should refrain from financing the Nenskra HPP ,  as it does not meet the strategic objectives of the AIIB energy strategy, and the project does not comply with the SPSs of other international financial institutions.