Home > Campaign update > To live or profit? Video from a protest action in the Czech Republic

On July 17, protestors in northern Czech Republic held an action outside the home of Jan Dienstl, a coal magnate who is lobbying heavily to have the country’s limits on mining removed. The participants came from the summer camp of Bankwatch’s member group Hnuti Duha that took place in Horní Jiřetí, a small town which would be set for demolition if the plans of the mining companies to breach ecological mining limits succeeded. 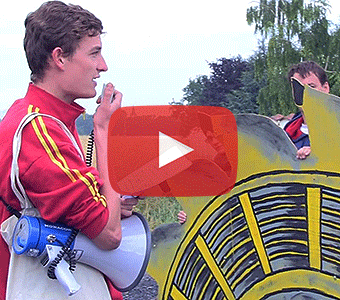 On July 17, protestors in northern Czech Republic held an action outside the home of Jan Dienstl, a coal magnate who is lobbying heavily to have the country’s limits on mining removed.

The participants came from the summer camp of Bankwatch’s member group Hnuti Duha that took place in Horní Jiřetí, a small town which would be set for demolition if the plans of the mining companies to breach ecological mining limits succeeded.

The fourty young people assembled in front of Dienstl’s manson of Dienstl to “give him a taste of his own medicine” and wake him up with a hundred-decibel reproduction of one of his mining excavators. The sound was deafening. In the short breaks amid the unbearable noise a theater performance was held, suggesting that coal has been found underneath Dienstls house, the building was expropriated and would be demolished. Activists dressed up as miners surrounded the site with barrier tape and held banners such as “get out of your house, make place for the mine”.

It was a graphic illustration of what would really happen to people in mining regions if the “limits” to brown-coal mining were removed. Horní Jiřetín could be destroyed, its inhabitants expelled and the mine would expand more than two-fold. The mine’s edge would reach up to five hundred meters from houses on the outskirst of Litvínov city. People living there would have to stand the brutal screeching noise not just for a few dozen minutes in the mornings but for years, all day, all night.

Why? Literally for no other reason than to secure further profits of three individuals: Dienstl and his associates Tykač and Fohler. The three have been receiving dividends while laying off most of their workers and now have the audacity to abuse employment as an argument for further expansion of their mines. According to the economic assesments to date nobody else really needs their coal, as they burn more than half of it in their dirty power plant in Chvaletice.

The coal is also not needed to satisfy energy demand in the Czech Republic that currently exports 16 million tons of coal annually in the form of electricity.

But not all hope is lost – recent negotiations in the government indicate, that destruction of Jiřetín is off the table, for now. While it is possible that the final decision will be postponed up until 2020 activists and locals have won more time to convince politicians that destroying lives for coal is not an option and that alternatives to a fossil fueled economy exist and are feasible.

Read more about the controversy on our blog >>