We have analysed the lending portfolio of both institutions for the time after their latest energy policies came into force. Our categories and methodologies thereby differ from those of the banks in order to present a more realistic picture of the climate impact of their energy related lending.

Draft strategy does not bode well for climate

The EBRD’s draft energy strategy (pdf) would not prevent the bank from financing very dirty coal projects, including the expansion of the
Kolubara lignite complex or the Kosovo C power plant. It would allow cementing countries’ dependence on coal.

Can the EBRD lead towards sustainability?

A discussion with finance and energy experts 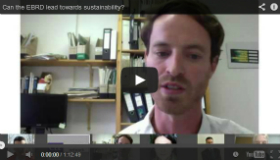 The EBRD’s substantial fossil fuel and coal related investments are actively inhibiting the de­carbonisation of energy sectors in its countries of operation, which have a much higher energy and carbon intensity than western Europe.

With such carbon-intensive figures, the bank’s commendable efforts to increase lending to new renewables and energy efficiency won’t make a big difference in the global fight against climate change.

Read more in our study:
Tug of War: Fossil fuels versus green energy at the EBRD

Success! The EIB has adopted a new energy lending policy that strictly limits its coal lending. Read more in our press release and blog post.

Between 2007 and 2011 the EIB loaned 30% of its energy budget (62 billion Euro) for different kinds of fossil fuel projects, sometimes causing a high carbon “lock-in” effect, for example when financing coal power plants with a sum of almost EUR 2 billion.

Read more in our three page briefing:
The EIB’s energy lending in the spotlight

Stuck in the past or facing the future?
An interactive infographic illustrates how the EIB’s harmful energy projects inhibit the bank to fully face the future of clean energy.