Azerbaijan political prisoners list published with report’s authors on it

London — Human rights activists in Azerbaijan published yesterday a list of 98 people who are currently political prisoners in the country run by the authoritarian regime of Ilham Aliyev. Ironically, the list includes the names of two of its authors, prominent rights activists Rasul Jafarov and Leyla Yunus, who were arrested under false charges earlier this month while they were working on the report. 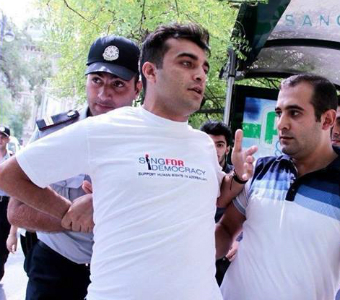 London — Human rights activists in Azerbaijan published yesterday a list of 98 people who are currently political prisoners in the country run by the authoritarian regime of Ilham Aliyev. Ironically, the list includes the names of two of its authors, prominent rights activists Rasul Jafarov and Leyla Yunus, who were arrested under false charges earlier this month while they were working on the report.

Rasul and Leyla’s arrests are some of the latest in a new wave of systematic repression by the Azerbaijani regime that has seen four prominent activists arrested in the space of the last two weeks.

In the most recent incident, veteran activist and lawyer Intigam Aliyev was detained in the Azeri capital last Friday, and charged with tax evasion, abuse of office and illegal entrepreneurship. His name is now the latest entry on the political prisoners list.

Leyla Yunus, one of the Azerbaijan regime’s fiercest critics, was detained at the beginning of August alongside her husband Arif Yunus, on accusations of treason, spying for Armenia and illegal business activities, which could land them in prison for life.

Lawyer Khalid Bagirov, who is acting on behalf of all four activists, has said the arrests are politically motivated, and that their acquittal is “impossible”. There is concern for Arif and Leyla Yunus, who both have long-running health problems, which require specific medication and foods. This is not being provided in prison.

The recent arrest and the launch of the political prisoners list are taking place just ahead of next month’s 20th anniversary of the signing of the so-called contract of the century between Azerbaijan, BP and ten other international oil companies. Since that signing repression in Azerbaijan has steadily increased.

Azerbaijan is a gas rich country which makes it a favourite destination for many EU leaders in recent years. Among them where David Cameron (UK prime minister), Mark Rutte (Netherlands’ Prime Minister), Jose Manuel Barrosso (EC president) and Suma Chakhrabati (EBRD President). And just one month ago Aliyev paid an official visit to Italy which currently holds the EU presidency.

While the EU already reacted to Jafarov’s arrest calling on the Azeri authorities to respect the rights of civil society organisations, repeated human rights violations hasn’t prevented it from maintaining a close relationship with Aliyev’s regime. The arrests have paradoxically intensified in a period when Azerbaijan is holding rotating the presidency of the Council of Europe.

In a move to decrease its dependence on Russian gas, the EU and many of its member states are preparing the construction of a pipeline that has to bring Azeri gas via Turkey to the EU, the so called Euro-Caspian mega pipeline or the Southern Corridor. It is also expected to receive massive EU funding from the commission, member states development banks and private companies.

In June 2014, before his arrest, Rasul Jafarov commented “Before the oil and gas incomes came to Azerbaijan we had more democracy and freedom. From then on the situation started to deteriorate. We have problems with journalists being arrested, political prisoners, religious believers -if you criticise the government you can be easily interrogated and prosecuted under fabricated charges.”

Emma Hughes, from Platform London, who has been tracking the impact of oil and gas in Azerbaijan since 1998, said: “As the 20th anniversary of the contract of the century approaches the human rights situation in Azerbaijan couldn’t be worse. The time has come for BP to say enough: they have to withdraw any financing for the Aliyev regime and join the international call for the release of political prisoners in Azerbaijan.”

(1) See the list of political prisoners in Azerbaijan:
https://bankwatch.org/documents/politicalprisoners-AZ.pdf

(2) Read a blog post by UK NGO Platform on the arrest of rights activist Rasul Jafarov:

(4) Rasul and Yunus also campaigned against the 1st Europen Olympic Games that will be hosted by Azerbaijan in 2015 and which are a major PR coup for Ilham Aliyev’s repressive regime. More in this Platform blog post:

All that Glitters. Azerbaijan and the Olympics

(5) Earlier this month it was announced that Blair will advice the consortium behind TAP, the last part of the pipeline which runs from the Balkans to Italy.
http://www.ft.com/intl/cms/s/0/28b699ae-0d9f-11e4-815f-00144feabdc0.html#axzz39ccwNNod