French bank Crédit Agricole’s support for a proposed major new coal plant project in Croatia is inconsistent with the bank’s climate ambitions and its own sector policy on coal-fired power plants, according to a new study released today. The analysis, by Friends of the Earth France and Croatia, Zelena Istra, CEE Bankwatch Network and BankTrack, screens the risks of the 500 megawatt Plomin C project proposed for development in the picturesque Istrian peninsula, a popular international tourist destination. 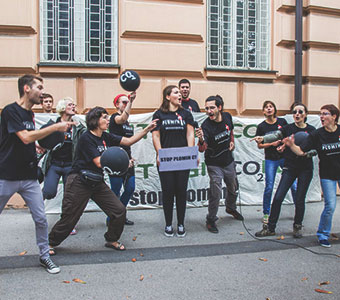 French bank Crédit Agricole’s support for a proposed major new coal plant project in Croatia is inconsistent with the bank’s climate ambitions and its own sector policy on coal-fired power plants, according to a new study released today. The analysis, by Friends of the Earth France and Croatia, Zelena Istra, CEE Bankwatch Network and BankTrack, screens the risks of the 500 megawatt Plomin C project proposed for development in the picturesque Istrian peninsula, a popular international tourist destination.

The report, “Plomin C power plant project – compliance study of the project with Crédit Agricole’s policies on coal-fired power plants and coal mining” can be downloaded from: https://bankwatch.org/sites/default/files/PlominC_Compliancestudy_Sept2015.pdf

Less than three months before the United Nations climate summit in Paris, and with Crédit Agricole presenting itself as taking a responsible stance on climate change, Croatian and international groups are launching a campaign with actions held today in Paris and Zagreb aimed at ending Crédit Agricole’s role as financial advisor in the estimated EUR 800 million Plomin C project.

Pippa Gallop, Research Co-ordinator at CEE Bankwatch Network, said: “The Plomin C project, if it proceeds, would violate both local and European laws and regulations. The coal plant lacks an alternative assessment, the project promoters have failed to address relevant climate and energy dependence issues, not to mention the coal plant’s very real economic risks. After assessing all the potential impacts of the project, our study finds that by supporting this project Crédit Agricole is violating the principles which it claims to its customers and shareholders to be upholding.”

Crédit Agricole announced in May this year that it is ending its funding for coal mine projects and companies specialised in the sector “in order to cut down on the use of fossil fuels and meet the objective of limiting global warning to 2°C by the end of the twenty-first century“. [1]

However, the campaign groups believe that this welcome move from the bank is being compromised by its ongoing support for coal plants. Crédit Agricole, the only international bank currently supporting the construction of the Plomin C coal plant project, provided more than EUR 4.7 billion in financing for the coal power sector over the last ten years, making it one of the top 20 climate-damaging banks worldwide. [2]

Lucie Pinson, private finance campaigner for Friends of the Earth France, commented: “The termination of Crédit Agricole’s support for coal mines is a healthy first step towards a total exit from fossil fuels. But the bank seems not to have fully grasped the unequivocal point being advanced by scientists. If we are to leave more than 80% of the world’s coal reserves in the ground to limit global warming below the 2°C threshold, then we simply cannot afford to carry on building new coal power plants that will emit millions of tonnes of CO2 for decades to come. [3]

“Crédit Agricole must immediately withdraw from Plomin C if it is sincere in its claims about wanting to fight climate change. As long as it maintains its support for this project led by notorious polluters Alstom and Marubeni, Crédit Agricole will continue to be responsible for worsening climate change.”

A referendum in March 2015 found that 94% of the Istrian population were against Plomin C. The project is currently the subject of several court cases.

Bernard Ivčić, director of Zelena Akcija/Friends of the Earth Croatia, commented: “Croatia hasn’t produced coal for years, so this project will do nothing for the country’s energy security or for raising living standards. In fact, the project may lead to increased electricity prices, causing a double burden for the population already suffering the severe impacts of air pollution. If the 500 megawatt Plomin C coal plant is realised, studies project that it will cause the premature deaths of 680 people.”

During actions taking place today in Paris, Zagreb and on social networks, the groups will call on Crédit Agricole to immediately withdraw from the Plomin C project. In Paris, the Young Friends of the Earth have organised a press conference within the premises of a Crédit Agricole bank warning of the health impacts of the project, with photos of the people who will be affected if Plomin C goes ahead. In Zagreb, activists from Zelena Istra, Friends of the Earth Croatia and Greenpeace are gathering in front of the French embassy in order to call on France’s public and private bodies to stop all support to fossil fuels.

[2] Crédit Agricole is advising the Japanese company Marubeni leading the construction of Plomin C, which will purchase the required equipment from Alstom. Crédit Agricole is the lead finance arranger for the project and is responsible for project relevant studies (including economic and environmental) prior to project fundraising. To find out more about the Plomin C project, see the Bankwatch Profile (English) or the Friends of the Earth Profile (French).

Information on Crédit Agricole’s coal financing in the period 2005 to April 2014 is available on BankTrack’s CoalBanks website: http://coalbanks.org/bank#credit_agricole