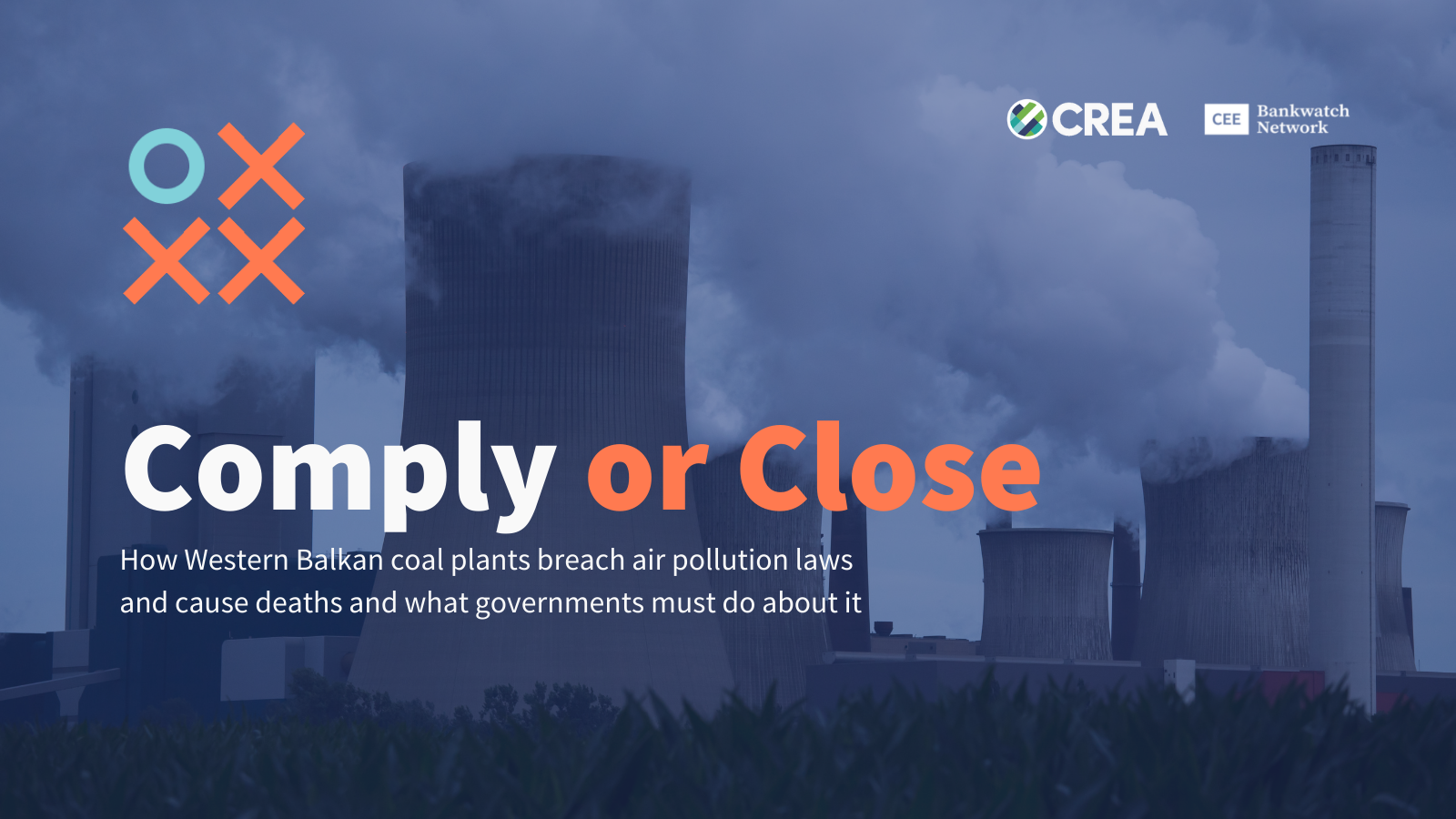 The report, Comply or Close, launched to mark the International Day of Clean Air for blue skies, finds that nearly 12,000 of these deaths were due to breaches of legally binding pollution limits. More than half of these preventable deaths took place in the EU, which imports 8 percent of the electricity produced by these heavily polluting plants.

Air pollution from coal plants in Serbia, Kosovo, Bosnia and Herzegovina, North Macedonia and Montenegro affects not only people in their own countries but also those in neighbouring EU countries, particularly in Romania, Hungary and Greece, according to the report.

“This report lays bare the human toll from the continued breaches of coal-based electricity in the Western Balkans. Governments of the region must immediately begin a rapid and just transition to sustainable energy systems, with EU support,” said Pippa Gallop, Southeast Europe Energy Advisor at CEE Bankwatch Network.

The Large Combustion Plants Directive – an EU directive to reduce emissions of dangerous substances, adapted for countries parties to the Energy Community Treaty – legally requires these countries to rein in air pollution from their power plants since 2018. Yet, as the report finds, in 2020, the Western Balkans’ 18 coal plants emitted two and half times as much sulphur dioxide (SO2) as all 221 coal power stations in the EU combined.

The new report reveals the extent to which coal plants in the Western Balkans have not only been flouting the countries’ legal obligations, but also taking an immense toll on people’s lives in the region and beyond.

In the three years since air pollution limits became obligatory under the Energy Community Treaty, coal-fired power plants in Serbia, Bosnia and Herzegovina, North Macedonia and Kosovo have been emitting SO2 at levels that are at least six times the legal limit [1].

In Serbia alone, coal plants that are subject to the National Emissions Reduction Plan emitted in 2020 more SO2 than the entire EU coal power plant fleet.

The same year, Bosnia and Herzegovina’s Ugljevik power plant was the region’s worst polluter, single-handedly breaching the combined SO2 ceiling for all four countries. The unit, just like Serbia’s Kostolac B, has a desulphurisation system fitted, but it has not been put to use. Worse still, an additional 700 MW of new lignite capacity is still planned at the Ugljevik power plant.

All four countries with National Emission Reduction Plans – Serbia, Bosnia and Herzegovina, Kosovo and North Macedonia – are currently facing dispute settlement cases for failing to comply with the pollution limits in the Plans in 2018 and 2019. Another dispute settlement case was opened against Montenegro in April 2021 after the Pljevlja power plant continued operating beyond its 20,000 hours quota under the Large Combustion Plants Directive’s “limited lifetime derogation”.

“Those Western Balkan Governments which have not yet done so, must set a date for an urgent coal phaseout”, said Davor Pehchevski, Balkan Air Pollution Campaign Coordinator at CEE Bankwatch Network. “For power plants which cannot be closed immediately, governments must limit their operating hours until emissions standards are met, in order to save lives”.

“In parallel, investments in energy efficiency measures and renewable energy must be urgently stepped up, and plans for a just transition for coal workers and communities need to be drawn up together with all relevant stakeholders, especially the affected communities.”

According to the report, the electricity generated by these coal plants and traded with the EU in 2020 — although making up a tiny fraction of EU electricity consumption — produced as much SO2 as half of the EU’s coal power plants combined.

“As our report shows, when the EU trades electricity with its Western Balkan neighbours, it bears both the impacts and part of the responsibility for the resulting out-of-control air pollution. The EU must also help countries in the Western Balkans to move beyond coal by taxing fossil-fuel based electricity imports and ensuring effective enforcement of the Energy Community Treaty”, said Lauri Myllyvirta, Lead Analyst at the Centre for Research on Energy and Clean Air.

“Western Balkan governments cannot dream of EU membership while ignoring pollution control rules. To avoid this kind of flagrant non-compliance, enforcement of the Energy Community Treaty must be made a priority. The European Commission and EU governments must introduce effective penalties”, concluded Ioana Ciuta, Energy Coordinator for the Western Balkans at CEE Bankwatch Network.

The report findings, as well as additional context, can be found at https://www.complyorclose.org

See as well: Mortality in top 10 most affected countries due to electricity imports and emissions exceedances (2018-2020)