The European Investment Bank (EIB) has dangerously downplayed the contribution of the controversial Southern Gas Corridor to the unfolding climate crisis, according to a complaint that prompted the European Ombudsman to open a formal inquiry. 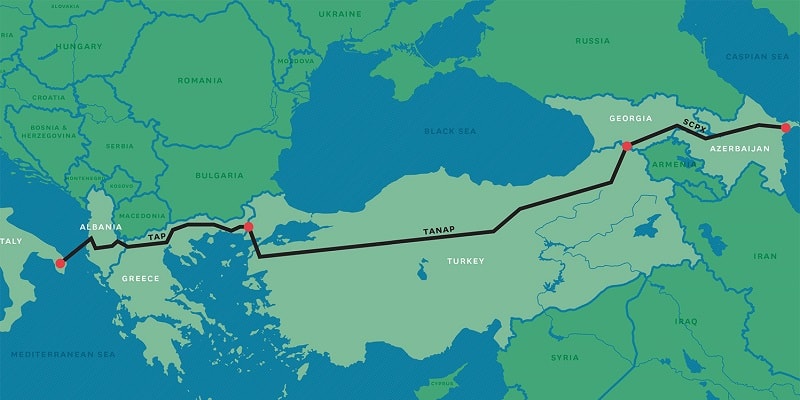 The complaint can be found here: https://bankwatch.org/publication/a-complaint-to-the-european-ombudsman

Despite the EU’s commitment to tackle the climate crisis, its financial arm, the EIB, signed in 2018 loans totalling EUR 935 million to the Trans Adriatic Pipeline (TAP) and the Trans Anatolian Pipeline (TANAP) that make up the western and central sections, respectively, of the 3500 kilometer long Southern Gas Corridor [1].

Filed by environmental NGOs CEE Bankwatch Network, Counter Balance, Re:Common and Friends of the Earth Europe, the complaint to the European Ombudsman reveals that the EIB greenlighted loans for both pipelines without proper assessments of their climate impact.

Yet, the emissions projections that do appear in the environmental and social impact assessments for the two pipelines also understate the mega-project’s climate footprint. These projections only take into account emissions in the two pipelines’ transit countries, without accounting for all emissions throughout the Southern Gas Corridor.

The EIB’s estimation of the climate impact was also based on science that was already out of date at the time of the assessment.

A more truthful estimation, the four environmental groups argue, should factor in emissions resulting from both the extraction of the gas at the Shah Deniz field in Azerbaijan, its entire transportation, and its eventual use in power plants in Europe.

Infrastructure projects of this kind and scale are typically planned to operate for several decades into the future – in reality, well beyond the EU’s 2050 carbon neutrality deadline. And yet, the EIB’s carbon footprint assessment neither considered the projects’ full lifetime, nor accounted for emissions resulting from the planned increase in volume of gas pumped through the Southern Gas Corridor.

Both TAP and TANAP are listed as Project of Common Interest (PCI), a priority status that grants privileged access to European public money, mainly via the EIB.

On November 17, the European Ombudsman found that the European Commission has so far not properly assessed the sustainability and climate impacts of gas projects included on PCI lists [2].

Civil society groups have long argued [3] that the EIB should not have supported the Southern Gas Corridor as the climate crisis is fast unfolding. And as the complaint now shows, the EIB has also failed to uphold its own standards on projects’ climate impact.

The TAP consortium, as well as 18 executives from both the company itself and some of its contractors are currently under trial in Italy for environmental damages. The prosecutor considers the environmental impact assessment of the project invalid because it didn’t take into account the cumulative impacts of one this massive climate-wracking energy project.

Anna Roggenbuck, Policy Officer at CEE Bankwatch Network, said: “In the complaint we showed that the EIB had downsized the real climate impact of the Southern Gas Corridor in order to portray the project as more climate friendly than it is in reality. The two hefty loans that the bank provided to TAP and TANAP will inevitably impact the EU’s ability to fight climate change. Also our earlier analysis showed a high risk that the gas from the Southern Gas Corridor would be as climate damaging as coal.”

Elena Gerebizza, senior researcher and campaigner at Re:Common, said: “The EIB inadequate due diligence on the environmental, social and climate impacts of TAP is blatantly under our eyes. The climate impact of this pipeline project – and the entire Southern Gas Corridor – was completely underestimated by the EIB, who didn’t even count the emissions for the Italian section of TAP. This is not acceptable and the European Ombudsman should look into it.”

Xavier Sol, Director at Counter Balance, said: “It is outrageous that the EU’s financial arm is downplaying the climate impacts of fossil fuels projects. As the EIB plans to transform itself into the ‘EU Climate Bank’, we urge the bank to apply much more stringent and science-based assessments in the future, so that it can effectively end its support to gas projects.”

Colin Roche, climate justice and energy programme coordinator at Friends of the Earth Europe, says: “The abject failure by the EIB to adequately assess the climate impact of one of Europe’s largest ever fossil fuel projects shows the cavalier attitude which the bank has had towards its environmental responsibility. Without addressing the fundamental flaws in its assessment and complaints mechanisms it’s doomed to fail the climate challenge.”