Strasbourg, Skopje, Prague – In the latest blow to planned hydropower dam in Macedonia’s Mavrovo National Park, the Standing Committee of the Bern Convention, the European wildlife treaty, added today its voice to growing calls to reconsider this reckless project. The spotlight is now on the European Bank for Reconstruction and Development (EBRD), the project’s main financier. 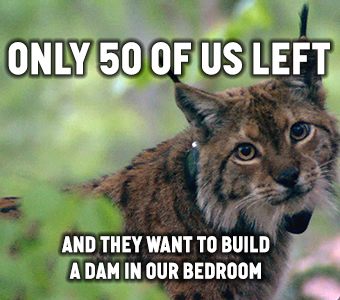 Strasbourg, Skopje, Prague – In the latest blow to planned hydropower dam in Macedonia’s Mavrovo National Park, the Standing Committee of the Bern Convention, the European wildlife treaty, added today its voice to growing calls to reconsider this reckless project. The spotlight is now on the European Bank for Reconstruction and Development (EBRD), the project’s main financier.

The heated discussions at the Committee concluded today with a resolution calling on the Macedonian government to suspend its plans for establishing over 20 hydropower facilities in the Mavrovo National Park until a Strategic Environmental Assessment, analysing the potential impacts, is completed.

In its resolution, the Committee refers to the park as “one of biodiversity hotspots in Europe, hosting a very high number of species and natural habitats protected by the Bern Convention”.

If materialized, the 68 MW Boškov Most hydropower plant is expected to cause irreversible damage to the fragile ecosystems in the park. Specifically, experts believe it could deal a fatal blow to the critically endangered Balkan lynx, for whom the park and its surroundings are the only known breeding area.

According to the latest scientific estimations, less than 40 individuals of this magnificent feline still remain in the wild.

This week’s discussions follow an independent expert study (pdf) into the planned hydropower developments in the Mavrovo National Park.

The study authors found the hydropower development to be “not compatible with the status of protection of the park,” and concluded that the Boškov Most project “as currently designed must be abandoned until the conservation status of the Balkan lynx population is brought back to a safe level and until when the Mavrovo National Park is no longer the only known core area of reproduction of this species.”

Yet, the Macedonian government has already secured EUR 65 million in funding from the EBRD for the Boškov Most project, despite the bank’s own environmental policy. The Committee’s decision also suggested international financial institutions revisit their involvement in the hydropower projects in the park in light of the outcome of an upcoming strategic environmental assessment.

“The Committee has now sent an unequivocal message to the Macedonian government and everybody involved in this egregious project that protected areas are there for a reason,” says Ana Colovic Lesoska, executive director of the Macedonian environmental group Eko-Svest. “In light of today’s decision, the Macedonian government should seriously reconsider its plans for hydropower developments in the Mavrovo National Park. Specifically, the government should engage the public and civil society in the decision making process, and it should also acknowledge Macedonia’s international responsibility to protect the wildlife and natural habitats in the park through allocating the necessary funds for the conservation of the Balkan lynx population.”

“Boskov Most has now become synonymous with endless trouble and it has already inflicted significant reputational damage on the EBRD,” says Fidanka Bacheva-McGrath, EBRD Campgin Co-ordinator with CEE Bankwatch Network. “Surely the EBRD realizes it is only going to get worse as a new strategic impact assessment buys the project some more time, but is unlikely to contradict numerous assessments done to date. The recommendation to suspend the hydro power plans should give the EBRD enough reason to pull out of the project.”

Yet, Boškov Most is not an isolated case. A study (pdf) released in May by Euronatur and Riverwatch found that 49 percent of hydropower projects in the western Balkans are planned to be located in protected areas. A new study to be released later this month will uncover the companies and banks, including the EBRD, behind this dam tsunami.