Ahead of this week’s European Council meeting where Heads of State will gather to discuss and potentially agree on the next term EU budget, the report analyses investments and measures presented in the NECPs of the following 14 Member States: Bulgaria, Croatia, Czechia, Denmark, Estonia, France, Hungary, Latvia, Poland, Portugal, Romania, Slovakia, Slovenia and Spain. It points out the measures in NECPs that are set to receive funding from the next EU budget and recovery funding, makes the case for significant spending improvements to boost climate ambition, and indicates harmful measures in the NECPs that should be excluded from the EU funding. 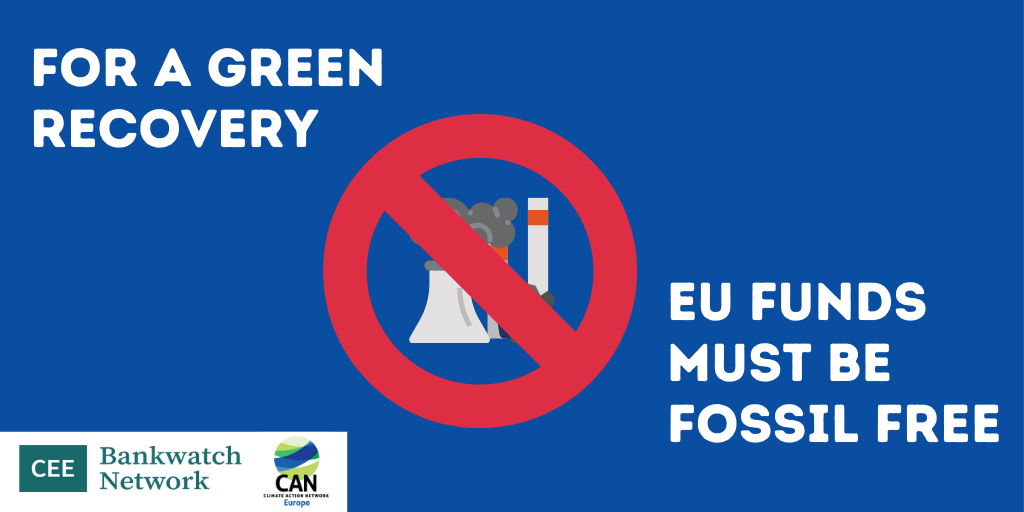 A new report published by Climate Action Network (CAN) Europe and CEE Bankwatch Network identifies concrete investment proposals as listed in National Energy and Climate Plans (NECP) of 14 Member States to be funded in order to ensure a green recovery. The report titled “EU Funds for a Green Recovery”, comes right after the president of the European Council, Charles Michel’s proposal to increase the climate spending target of EU funds from 25% to 30% and makes it clear that if the EU funds are used wisely, they could both ensure a green recovery and boost climate ambition.

Investments in sustainable renewable energy (including energy communities and prosumerism) and energy efficiency have the biggest potential to improve the quality of life for millions of Europeans, while increasing climate ambition. In addition, these sectors present a huge potential for creating jobs. Therefore, the report proposes them to be prioritised to get funding from the next EU budget and recovery funds. In addition, low emission transport systems, sustainable mobility measures and nature-based solutions are underlined as sectors having important potential to increase the climate ambition, while stimulating the economy for a green recovery. These measures offer important opportunities to Member States to increase their climate spending while ensuring the implementation of a much higher 2030 climate target for the EU.

However, the report points out that many harmful measures still remaining in the NECPs might undermine climate action in the next decade. As proposed by the Commission, the NECPs will inform the spending of the next generation of EU funds, including the recovery plans. Therefore, the report recommends Member States to direct their upcoming spending plans towards climate neutrality and not to put money on the harmful measures such as development of new fossil gas infrastructure, exploitation of national fossil fuel resources, use of biomass in low-efficiency heating systems and investments in non-renewable energy sources.

Markus Trilling, finance and subsidies policy coordinator at Climate Action Network (CAN) Europe said: “”In this week’s European Council, Heads of State must rapidly build on the President’s proposal and agree on increasing climate action spending to at least 40%. It is much needed to pave the way for a drastically increased 2030 climate target.

Timing of this decision is also very crucial as in the next months, Member States will present their spending plans for the next long term EU budget and set priorities for Recovery and Resilience Plans to receive support from the EU’s Recovery Fund. What Member States put in their spending plans will define the EU’s response to both the climate and economic crises in the next 10 years. Now, EU leaders have an opportunity to agree on using the full potential of EU funds to boost climate action and exclude support to fossil fuels.”

Raphael Hanoteaux, EU funds policy officer at CEE Bankwatch Network, said: “EU leaders have the choice to build back better with the recovery package. All member states win if spending plans are designed to transform public infrastructure and move towards a net zero-emissions, carbon free economy by 2050. This begins in eastern Europe by supporting smart investments with huge potential like energy efficiency, and banning any further spending on fossil fuels.”

The Commission’s proposal on the entire package, which comprises the revamped MFF 2021-2027 and additional funds specifically tailored to support the economic recovery until 2024 called ‘Next Generation EU’, has in place an overall climate mainstreaming target of at least 25%. The Council Presidency proposes to increase it to 30% and couple this financial boost with a commitment to reach the highest possible climate target for 2030. Cash from the Just Transition Fund would only be awarded to countries committing to climate neutrality on national level by 2050.