Home > Press release > Protestors address coal lobby meeting at Warsaw climate talks: ‘There is no such thing as clean coal’

Protestors address coal lobby meeting at Warsaw climate talks: ‘There is no such thing as clean coal’

WARSAW – People from around the world gathered today in front of Poland’s Ministry of Economy in protest of the World Coal Association’s International Coal and Climate Summit organised on the sidelines of the 19th UN climate change conference. 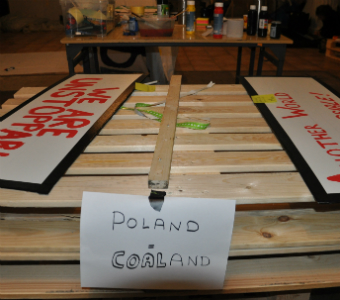 WARSAW – People from around the world gathered today in front of Poland’s Ministry of Economy in protest of the World Coal Association’s International Coal and Climate Summit organised on the sidelines of the 19th UN climate change conference.

Demonstrators argue that the business-as-usual agenda of the summit is an attempt to distract attention from the imperative of addressing climate change. The summit aims to maintain an already fragile coal industry that without subsidies would collapse, say the organisers.

With the action’s centrepiece in town – an eight-metre, inflatable set of breathing lungs [1] – protestors at the ‘People before coal’ rally are calling for an immediate phase out of all coal technologies and a shift of investments towards energy technologies that respect peoples’ health, the climate and environment.

The Coal and Climate Summit is organised under the heading ‘clean coal technologies, opportunities and innovations,’ [2] suggesting that new technologies like carbon capture and storage and underground gasification can transform coal into a green energy source.

But participants at today’s rally say that the thin façade of ‘clean coal’ masks the risks to people’s health and the environment by a set of unproven and costly technologies designed to delay action on climate change. [3]

The most recent report from the UN’s Intergovernmental Panel on Climate Change (IPCC) is unequivocal about the need to keep roughly two-thirds of known fossil fuel reserves in the ground in order to limit rising global temperatures.

Yet in the run-up to the Coal and Climate Summit, the World Coal Association has argued [4] for increased investments in more efficient coal power stations. Organisers of the action point out that coal is neither clean nor cheap, because burning coal releases a number of hazardous air pollutants that in turn cause chronic diseases like bronchitis, emphysema and lung cancer.

Speaking during the rally, Józef Drzazgowski from the Association for the Conservation of the Environment “Przyjezierze” in Poland’s Wielkopolska lignite mining region, said: “Coal extraction causes human suffering and irreversible damage to the environment. We cannot put a value on the destruction of our community’s social fabric, and the loss of livelihoods when our farmlands are ripped apart to extract coal.”

Isobel Braithwaite, from the International Federation of Medical Students Associations, said: “There is no question that burning coal damages our lungs, and it affects how well we breathe. It is imperative that governments around the world say no to coal burning and protect citizens, especially youth and children from its impacts. Remember: climate change is also the biggest threat to human health in the twenty first century.”

During a press conference following the action, Dr. Michal Wilczynski, the former Chief Geologist and ex-Deputy Minister of Environment in Poland, said: “In discussions about Poland’s energy strategy till 2050, I have yet to hear anything from a politician or an official that shows they care for the well-being of Polish citizens. Official scenarios estimate that in 2050 Poland will use 60 million tonnes of lignite and 50 million tonnes of hard coal, requiring the development of new coal mines and power plants and causing untold damage to our health, environment and climate. The fact that the Coal and Climate Summit is being held under the auspices of the Polish government is further proof that it cares neither for the well-being of its citizens nor the environment.”

Soumya Dutta, the national convenor of India’s people’s science campaign, added: “We are now experiencing the worst impacts of the climate crisis, and this decade has seen the most serious of climate disasters.  Yet the world is running in circles to find concrete solutions, while continuing to advocate false solutions like ‘clean-coal’. There is no more tomorrow – if political leaders do not act today, they will be forced out tomorrow.”

For more information about the action and press conference contact

For more information about the health impacts of coal contact

[1] Images of the action are available at facebook.com/cough4coal. The inflatable lungs were created by the art-activist group Tools for Action

[3] A fully-referenced briefing about the myths of clean coal is available at: facebook.com/cough4coal