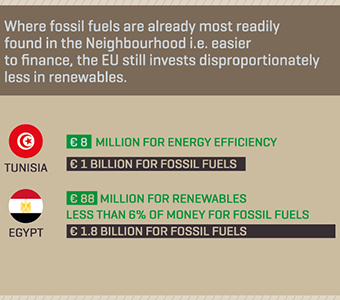 The main findings of the study will be presented today at the European Parliament. The study’s executive summary can be found here:
https://bankwatch.org/sites/default/files/ENP-energy-exec-summary.pdf

An infographic summarising the findings can be found here:
https://bankwatch.org/publications/infographic-how-eu-development-funds-fuel-climate-change

Guiding the EU’s relations with 16 countries to its east and south, the European Neighbourhood Policy instructs the bloc’s public investments in these countries and should in part help spur sustainable development. Between 2007-2014 EU [1] financial support to the energy sector in Europe’s neighbourhood exceeded EUR 9 billion.

For example, while Tunisia received nearly EUR 1 billion in support of fossil fuels, it obtained only EUR 8 million in investment for renewables and energy efficiency. In Egypt, the EU financial institutions contributed with EUR 1.5 billion to hydrocarbons. At the same time, their support for renewables amounted to EUR 74 million, that is 5 percent of the financing for fossil fuels.

This discrepancy is most evident in the lending portfolio of the European Investment Bank (EIB) which provided the largest volume of financing. During this period, the bank extended loans to 51 projects totalling EUR 5.6 billion. But while energy efficiency and renewable energy projects were awarded EUR 780 million, fossil fuel-related project received from the bank no less than EUR 3.2 billion.

The second main funder, the European Bank for Reconstruction and Development (EBRD), supported 105 projects with a total of EUR 2.8 billion. Of this amount, energy efficiency, wind, solar and other sustainable energy projects in European Neighbourhood countries were granted EUR 582 million over this eight years period. Yet gas, oil and other fossil fuel projects were granted EUR 557 million in 2014 alone, of a total EUR 991 million between 2007 and 2014.

“The EU lenders talk of leading Europe’s neighbourhood to the next level when it comes to renewable energy. But their track record says the opposite,” Klara Sikorova, Senior Researcher with Bankwatch and lead author of the report. “Europe must radically change course if its rhetoric on sustainable energy investments is to become a reality.”

[1] The analysis examined financing from the major EU financing institutions and energy cooperation programmes including the European Investment Bank, the European Bank for Reconstruction and Development, Neighbourhood Investment Facility, Inogate and the European Atomic Energy Community.