Victories piling up: 130 more hectares of forest saved from lignite mining in Romania

Bucharest – A Romanian court has accepted a petition filed by Bankwatch Romania and Greenpeace Romania, and cancelled the environmental permit which allowed cutting down 130 hectares of forests – equivalent to approximately 260 football pitches – to make way for the expansion of the Pinoasa lignite open pit. 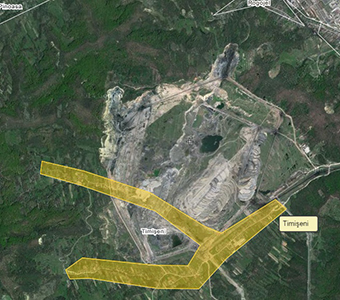 Bucharest – A Romanian court has accepted a petition filed by Bankwatch Romania and Greenpeace Romania, and cancelled the environmental permit which allowed cutting down 130 hectares of forests – equivalent to approximately 260 football pitches – to make way for the expansion of the Pinoasa lignite open pit.

The two organisations filed this court case in 2013, because the environmental permit issued by the Gorj Environmental Protection Agency only assessed the environmental impact of the deforestation, without a proper evaluation of the lignite extraction activity, which is the actual project.

Located in Romania’s southwest, the mine is owned by the state company Oltenia Energy Complex (OEC).

The environmental permit did not oblige OEC to compensate the land owners, as required by law. It also did not evaluate cumulative impacts of Pinoasa lignite quarry’s expansion together with ten other similar projects planned by OEC in the Rovinari area. Such impacts include exposure to air pollution, noise, risk of landslides, loss of habitats and others.

No social or health impacts analyses have been carried our either, although the mines’ expansion doesn’t make only forests disappear, but neighbouring villages too. In fact, a large part of the village of Timiseni has already vanished from the face of the Earth to allow the development of the Pinoasa pit. See a map here:
http://wikimapia.org/#lang=ro&lat=44.886587&lon=23.126307&z=14&m=b

“The Oltenia Energy Complex still refuses to acknowledge the legal requirement to conduct an environmental impact assessment, in spite of an infringement procedure opened by the European Commission against the Romanian Government [1] and the previous national courts’ decisions[2],” says Cătălina Rădulescu, the lawyer representing the two NGOs and a member of Bankwatch Romania. “The state owned company insists on referring to 40 year old legislation, from when the first lignite operations started developing in the region. We demand the company carries out environmental and social impact assessments for all its lignite mines’ operating licenses, abiding by today’s environmental protection legislation.”

“Forests play a crucial role in CO2 absorption, the gas with the highest contribution to climate change. The Oltenia Energy Complex wants to cut down forests to extract coal, which it would then burn in its thermal power plants, causing a double environmental damage,” adds Ionut Cepraga, campaign coordinator with Greenpeace Romania. “We argue that currently Romania has plenty of clean energy resources to quit burning coal, and this should also be reflected in the country’s National Energy Strategy, currently under preparation.”

This is the latest legal victory in a series which has so far annulled 27 deforestation permits, preventing the clearance of 22 hectares of forest for the expansion of the Rosia open-pit. The court has also ordered the cancelling of another environmental permit, thus saving 59 hectares of forests near Tismana 1 lignite quarry. Nine other, similar cases are pending a court decision.

Yesterday’s court decision is yet to be formally transmitted to the parties. The defendants, the Gorj Enviornmental Protection Agency and the Oltenia Complex, can appeal the ruling within fifteen days of its notification.

1. On the decision of the European Commission to open an infringement procedure against Romania: https://bankwatch.org/news-media/for-journalists/press-releases/european-commission-opens-infringement-procedure-against-r