Since 1994, Shell has been spearheading an oil and gas extraction project in Sakhalin Island, a far eastern Russian territory. This development will affect the world’s last 100 or so western pacific grey whales; it will destroy the marine environment; and it will threaten the livelihood of tens of thousands of fishermen. 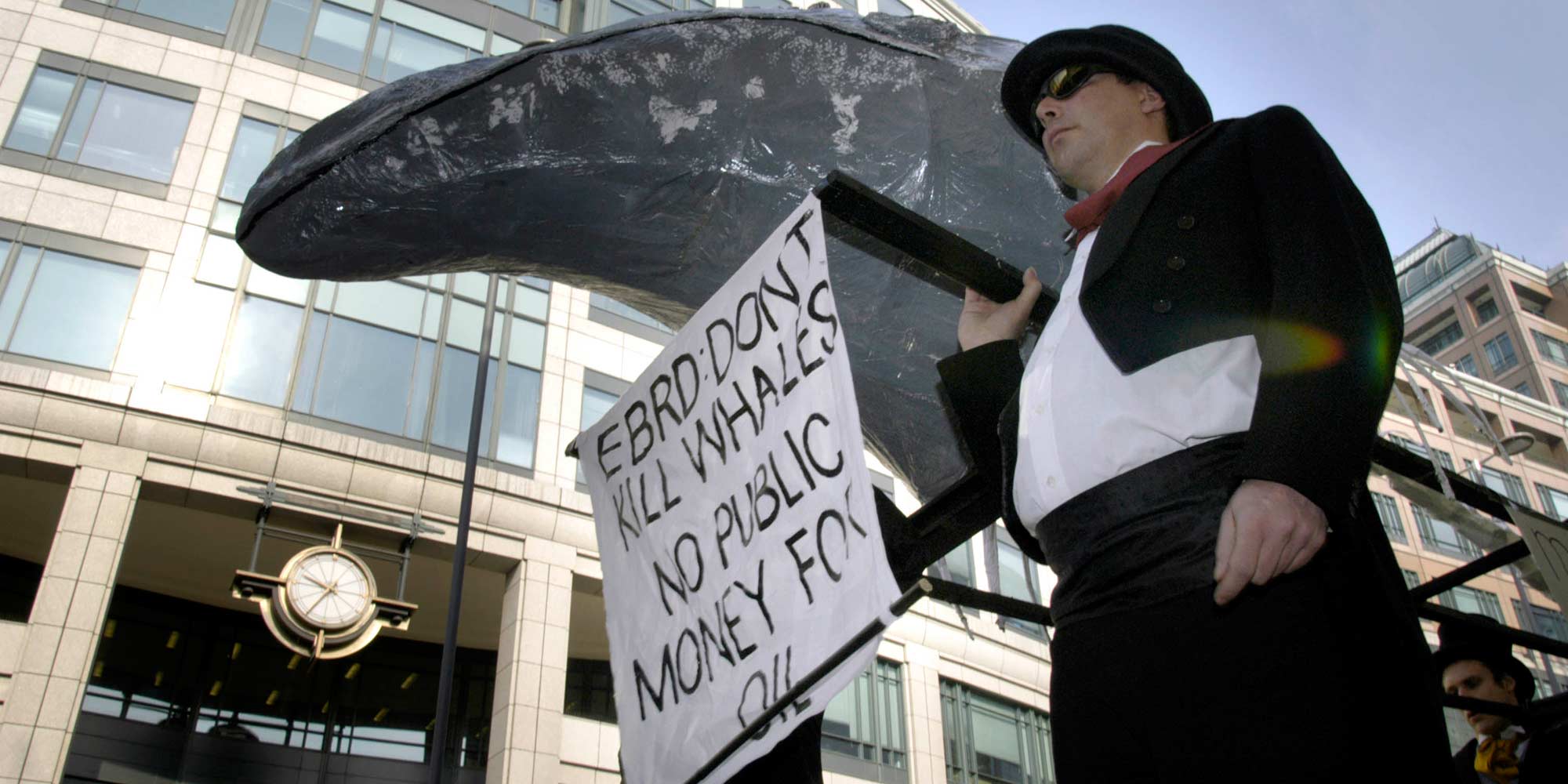 Since 1994, Shell has been spearheading an oil and gas extraction project in Sakhalin Island, a far eastern Russian territory. This development will affect the world’s last 100 or so western pacific grey whales; it will destroy the marine environment; and it will threaten the livelihood of tens of thousands of fishermen.

Now Shell, together with Mitsubishi, Mitsui and, recently, also Gazprom, is expanding their environmental and social destruction of Sakhalin Island, with further support potentially from the international financial institutions. Construction is nearing completion on two pipelines in one of the most seismic regions in the world.

These works have heavily impacted one of the key salmon fishing area off the island by dumping one million tons of waste into the sea.

The permanent threat of a large oil spill in the Okhotsk and Japanese seas will be ensured by Shell’s development. And, as has recently been discovered, the project’s construction, involving a very large influx of foreign male workers to the island, is generating a harrowing rise in prostitution, HIV/AIDS and violence against women.

For this project Shell, together with Mitsui and Mitsubishi, established Sakhalin Energy Investment Company LTD at Bermudy Island. In 1998 Shell embarked on the construction of the first phase of the Sakhalin II project, with financial support coming from the European Bank for Reconstruction and Development (EBRD) and the Japanese and US Export Credit Agencies. Not only was the Environmental Impact Assessment flawed, with the company refusing to respect Russian legislation and release environmental information, but since the construction of the platform there have been reports of a reduction in saffron cod fishing that is especially important for the island’s indigenous communities.

Now the company is expanding its operation. They are constructing: two new oil and gas platforms in the north of Sakhalin; two 800 km oil and gas pipelines running through the whole island; a Liquid Natural Gas production plant together with an oil and LNG terminal in Aniva Bay.

The company is now negotiating with US Ex-Im Bank, the Japanese Bank for International Cooperation (JBIC), the Export Credit Guarantee Department (EDGD) UK and others to secure the loan for the second phase. In August 2007 the EBRD – who dropped from the project when Gazprom joined the consortium – announced that it “will not resume negotiations on financing the Sakhalin II project”.

As the company so far refuses to have any meaningful dialogue with affected people about the need for changes in the project, there is increasing frustration across the island and many people are calling for the project to be stopped completely until required changes are implemented properly. So far the only change from the original plan was the rerouting of the undersea pipeline to avoid the grey whale feeding ground.

The respected Russian campaign group Sakhalin Environment Watch is being forced to choose between registering as a ‘foreign agent’ label and closing down, writes Oliver Tickell. Environmental campaigning, it seems, is now a ‘political activity’.

Yuzhno-Sakhalinsk, Russia – Sakhalin Environment Watch (SEW), Bankwatch member group in Russia’s far east, has been ordered by the Russian authorities to register itself as a ‘foreign agent’. The group rejects claims it is engaged in any political activity, and intends to contest the decision. If the decision is not repealed, the group will consider shutting down.