EBRD enters Kosovo: Past IFI failures must be heeded

As Kosovo becomes the EBRD’s latest country of operation, the bank needs to listen to civil society, writes Visar Azemi.

Kosovo has just celebrated the fifth anniversary of independence. In these five years, Kosovo has achieved membership of certain international financial institutions (IFIs): having already joined the IMF and the World Bank, on December 17 last year Kosovo became the 66th member of the European Bank for Reconstruction and Development. Yet what can Kosovo’s citizens expect from EBRD membership?

For one thing, there is a definite need to learn from past international financial institution mistakes in the country. Kosovo still has a wide range of serious economic, environmental and social problems – a financial and budgetary crisis ongoing since 2001 has not been alleviated by World Bank membership. At the same time, the World Bank has mistakenly devoted too much focus and energy to building a new lignite power plant, spending millions of euros on associated technical assistance and studies. And the process continues to be mismanaged by the World Bank.

Meanwhile Kosovo’s economic development is the worst in Europe. Official unemployment stands at around 47 percent, with youth unemployment reckoned to be as high as a staggering 73 percent. The figures for extreme poverty are equally grim with around 13 percent of the population affected. Alongside Bosnia and Herzegovina, Kosovo brings up the rear in rankings that assess the ease of doing business in the region. Compounding matters yet further, Transparency International rates Kosovo as the most corrupt country in the region.

The challenges then for the EBRD in Kosovo are extreme and deep-rooted – to start to overcome them, it would do well to embark on some innovative, new approaches. 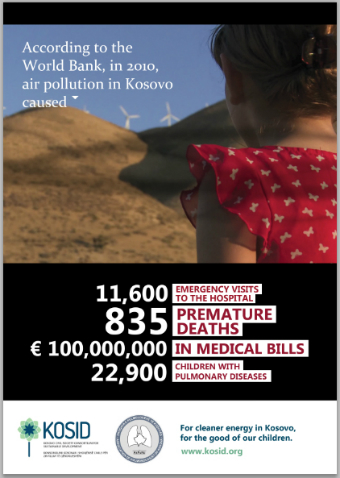 The World Bank’s plans to finance a major new coal power plant near Prishtina in Kosovo have been put into sharp focus by a new campaign from KOSID that draws on the bank’s own startling figures related to already existing air pollution in Kosovo.

The campaign highlights that climate impacts are not the only reasons to oppose energy production from coal. The health impacts are much more immediate, bringing very concrete and measurable distress for local populations and major dents in state budgets.

See more on our blog

As it starts to formulate and design its first strategy for partnership with Kosovo, the EBRD has to be alive to civil society and other independent experts, and not only to local institutional authorities. Civil society’s role in this initial process has to be a lot more than merely symbolic.

And where should the EBRD focus its attention in these early days? Those sectors that have been largely overlooked by international donors and other IFIs should surely be the most compelling if the EBRD is intent on improving living standards and economic prospects –investments are acutely needed in agriculture, multi-modal transportation, energy efficiency, renewable energy and for ensuring a sustainable water supply,

After Serbia, Kosovo has the largest percentage of agricultural land (52 perent) and tilled land (27 percent). In spite of this, Kosovo still imports basic food items such as fruit, vegetables, flour and eggs. Indeed at the end of 2012 the country’s trade deficit totalled more than EUR 2 billion. Investments for sustainable agriculture could help decrease this deficit and increase employment at the same time.

When it comes to water supply, again Kosovo faces acute problems. Outages in drinkable water happen frequently, yet the government appears unable to tackle this problem.

Within the region of Prishtina alone, because of an old grid system, there is a huge amount of water being lost before it gets to households. At the same time, prevailing inadequacies in water and electricity provision remain the main obstacles for doing business in Kosovo. Given these water issues, it’s even more remarkable that the World Bank remains intent on supporting the new lignite power plant for which vast quantities of water are needed for the plant to operate.

Finally, when it comes to energy use, Kosovo is the most inefficient country in the region. Over 60 percent of the electricity produced is used to heat households. Similar to the water problem, energy losses here stand at 37 percent as a result of an old grid and electricity theft. EBRD backed energy efficiency programs could reap big wins, helping to decrease energy demand while boosting employment at the same time.

The challenges in Kosovo are huge, but certain solutions are staring us in the face. Civil Society in Kosovo would like to be part of building a partnership strategy between Kosovo and the EBRD. Key to this is meaningful dialogue and engagement. The EBRD, though, must grasp the importance of not replicating the mistakes of its sister organisations. Only offering documents to be signed off by Kosovo’s authorities after they have been drawn up elsewhere, and not holding proper consultations with civil society and independent experts in the country – this kind of approach has not got us very far in recent years.