Earlier this year at the World Economic Forum in Davos, Ukraine’s president Victor Yanukovych met Thomas Mirow, the EBRD president, with Yanukovych deeming the ongoing cooperation between Ukraine and the bank to be “excellent”. Other than this being a diplomatic pleasantry, when it comes to energy infrastructure projects Ukraine certainly appears to have done very well out of the EBRD: since 2005 the EBRD has committed more than half a billion euros for these projects in Ukraine, in particular for the upgrade and construction of high-voltage transmission lines. Yet the experience for all concerned – including local communities – has been far from excellent, and concerns are mounting that further grid expansion plans could be storing up yet more problems.

Four transmission line projects in Ukraine have been submitted to the EBRD, and now a fifth – the big daddy of them all – is being lined up for implementation and financing: the Ultra High Voltage Transmission Line Second Backbone (see map below).

Officially, this 1000 kilometre long transmission line, with an estimated price tag of EUR 2 billion, would contribute greatly to the stability of Ukraine’s electricity grid, foster the development of renewable energy sources and improve electricity supply for Ukrainian consumers. As with the previous transmission line projects, it is expected that Ukraine will again seek major loan financing from the EBRD and the EIB.

Yet this Second Backbone line is also receiving criticism for being the final piece in the transmission jigsaw that would permit the exporting of electricity from Ukraine’s ageing nuclear reactors to Europe. The huge line would provide the opportunity to connect three nuclear power plants and two pumped storage plants and link those capacities with Europe in order to export ‘cheap’ nuclear electricity to the European market. Before looking at the more hidden nuclear implications, it is worth reminding ourselves of the checkered history of the EBRD’s involvement in Ukraine’s power lines, and considering whether a further such loan makes sense for Ukraine and for the bank. 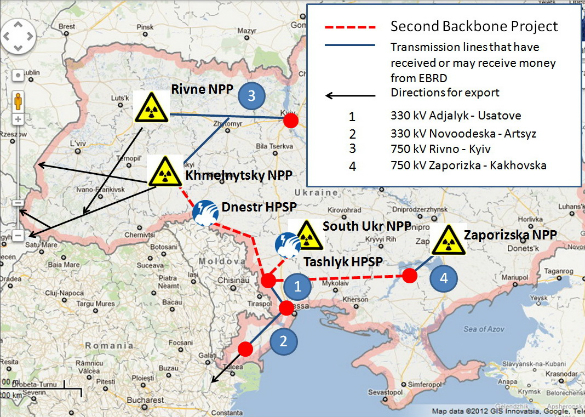 Over the last seven years, four Ukrainian power lines projects were submitted to the EBRD, and to date three have been signed off by the bank. Reckless planning and highly insensitive handling of community and environmental issues from the state energy company Ukrenergo have been commonplace.

The 330 kV Novoodeska-Artsyz transmission line has not so far received EBRD financing due to its unacceptable routing. The route, proposed by Ukrenergo in 2010, goes straight across the Low Dnister National Park, a bird area of international importance that is protected under the Ramsar Convention. Ukrainian environmental organisations have appealed to the EBRD and the project has been returned to consultants for rerouting.

Out of the three EBRD-backed projects, only one has been physically constructed, the relatively short, 124km long 330 kV Usatove-Adjalyk Transmission Line Project. But it has involved violations of human rights, local riots and impacts that are still ongoing – despite an official agreement signed by Ukrenergo (and with the EBRD also engaged) to relocate overhead power cables outside certain villages, after two years no action has been taken.

The 750 kV Zaporizka-Kakhovska line has been delayed for a year because of the community issues taking place in Usatove. Similar problems with land acquisition and clashes with environmentally sensitive zones are anticipated. The fourth line, the 750 kV transmission line Rivno-Kyiv, was signed with the EBRD in 2007 but has not been constructed for a variety of reasons mostly stemming from the promoter’s incompetence. Ukraine is already paying the interest on the EBRD loan.

The recent precedents, then, for the Second Backbone project are not good. And other than being plagued by similar scandals involving human rights violations and the destruction of nature protected areas (its precise routing is not yet known, though acute routing points are once again expected), Ukraine’s State Financial Inspection (SFI) has noted that there are several structural flaws that prevent Ukraine from successful implementation of energy infrastructure projects.

First and most fundamental, according to the SFI, an independent state financial monitor, is the discrepancy between the Energy Strategy of Ukraine and real economic growth outlooks both for Ukraine and the wider world – the strategy, the key driver behind Ukraine’s energy export push, is deemed to overestimate GDP growth and the level of associated consumption. A second suggested reason is a lack of state policy and consistency when it comes to delivering energy projects: efforts and funds are spread across several projects without any tangible coherence, and this is compounded by bureaucratic obstacles.

But are these short-term frustrations and project niggles the price worth paying for both Ukraine and the EBRD when the longer-term goal of this new infrastructure lies well beyond Ukraine’s borders?

Ukraine’s energy strategy for the period up to 2030 aims to make the country a major electricity exporter to Europe. Although almost every EU neighbouring country has the same plans, they are not predicated on the same formula as Ukraine’s plans: the extension of the lifetime of old nuclear reactors. These extension programmes will require hundreds of millions of EBRD and European money, only they will be misleadingly called ‘safety projects‘. The Second Backbone project will not only make lifetime extensions necessary, but will ultimately lead to the installation of new additional nuclear units, in particular at the Khmelnitsky nuclear power plant.

All of these power lines projects, then, are not to fulfil Ukraine’s own domestic energy needs but are for export. When the nuclear dimension is factored in, we have what has been to date one of the EU’s dirty little energy secrets. With the Second Backbone project now looming into view, this is about to become the EU’s dirty great energy secret.

An overview of the issues surrounding the transmission lines’ controversies in Ukraine is available at: https://bankwatch.org/our-work/projects/second-backbone-corridor-high-voltage-electricity-transmission-lines-ukraine