What began as research into Serinus Energy EBRD loans that were granted to the company in July 2013 for the exploration and expansion of oil and gas fields in the Chouech Essaida, Ech Chouech, Sabria, Sanrhara and Zinnia concessions in Tunisia, has become a story that reflects both the revolving doors culture that permeates elite circles and how the EBRD is able to provide loans that provide absolutely no additionality.

A letter to the EBRD from a group of Tunisian and international NGOs (including Bankwatch), pointing out how shale gas exploration in the water-sensitive environment of North Africa’s deserts might not be the best deployment of public funds in terms of environmental and social sustainability made no difference. Nor did the fact that Kulczyk Oil Ventures (in June 2013 the company changed its name to Serinus Energy), an oil and gas transnational, is hardly in need of public money.

Jan Kulczyk is one of Poland’s richest people, with companies active in almost every conceivable sector – from real estate through brewing to infrastructure (highway construction) and natural resources – and spanning all six continents. Objectively, it is a hard sell to maintain that a Kulczyk company is not able to obtain financing from private sources.

With an estimated net worth of USD 3.9 billion, Kulczyk is ranked 402 on the World’s Billionaire list by Forbes. Kulczyk Investments – the parent company of Serinus Energy – is heavily involved in shale gas exploration and production both through San Leon Energy, which holds 83 concessions for both natural and unconventional gas exploration in Poland, Albania, Morocco, Spain, Ireland, France, Italy, Romania and Germany, and through Serinus Energy itself. In fact the first EBRD loan to Serinus Energy (at that time still Kulczyk Oil Ventures) is believed to have allowed it to become the first company from central and eastern Europe to have carried out hydraulic fracturing.

So how is it possible that a multinational of this size – presumably possessing not insignificant capital reserves – receives loans worth EUR 100 million in total for highly controversial projects, even by fossil fuel industry standards, in two countries as remote as Tunisia and Ukraine? 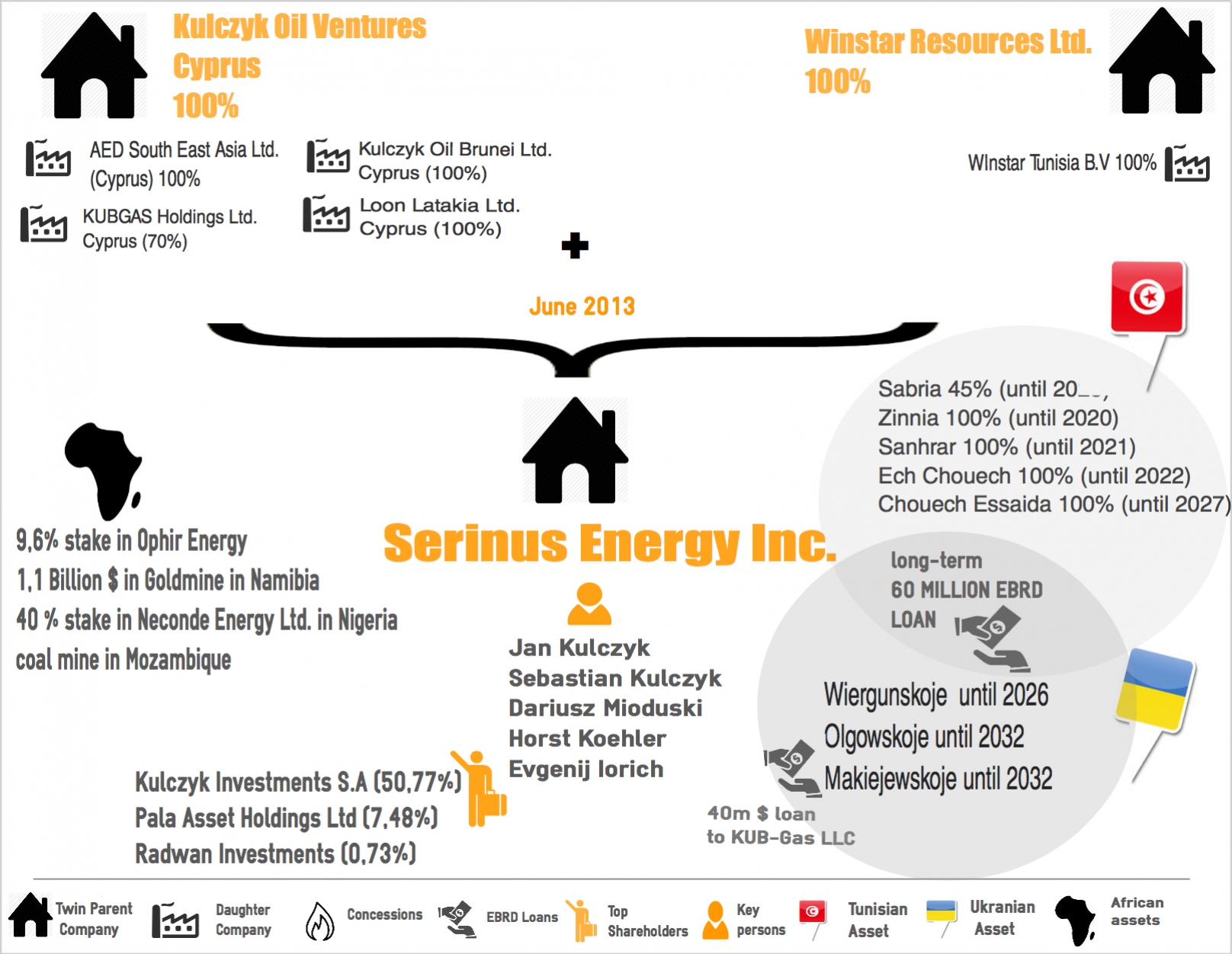 Step forward former EBRD president Horst Köhler. EBRD head from September 1998 until April 2000, former President of Germany (2004-2009) and former Managing Director of the International Monetary Fund (2000-2004), Köhler has been a member of Kulczyk Investment’s international advisory board since 2011. Indeed Köhler’s specific role is to assist Kulczyk with African investments. He appears to be hitting his performance targets.

With this kind of linkage eminently detectable, it might be expected that the EBRD would ensure that these loans be as transparent as possible. However, according to scoping missions on the ground undertaken by Tunisian organisations, local communities living next to drilling platforms have not been consulted as of the end of this April, nine months after the approval of the loans for Serinus Energy by the EBRD’s board of directors. Nor has drilling started yet.

Moreover, the EBRD has not been particularly helpful when responding to requests for information from Tunisian environmental groups concerned about the due diligence for the loan, categorised as a ‘B’ project by the bank.

This less than ‘sensitive’ categorisation has been deemed appropriate by the EBRD in spite of the groups’ contention that “the exploitation of shale gas requires massive amounts of water and chemicals and could have disastrous consequences in a country that faces serious water scarcity such as Tunisia,” and that “the type of shale identified in the Serinus Energy concessions in Tunisia is ‘hot shale’ which means that the rock is radioactive. Radioactive particles mix into the fracking fluid and drilling mud, and are brought to the surface.”

Will the EBRD be able to recognise its mistakes before it is too late and resist the temptation in the future to lend to shale gas projects in the water-scarce regions of North Africa? Or will it follow its business as usual approach, facilitated and overseen by the same businessmen as usual?

These are two questions deserving of a meaningful response at this year’s EBRD annual meeting in Warsaw.