Green spending shoots in eastern EU at risk of being crushed

EU member states and the European Commission, after what has felt like a marathon two-year process, are now engaged in finalising agreements on the EU’s Structural and Cohesion Funds (ESIF) investment strategies and spending plans for the 2014 -2020 EU budget period.

Where the 11 ‘new’ member states of central and eastern Europe (CEE) are concerned, their approach to economic and societal development via the EU funds is proving to be a double-edged sword: while their spending plans for climate action is set to increase ten-fold in comparison to the 2007-2013 period, and the ‘greenest Cohesion Policy legislation ever’ prevents them from committing major environmental crimes, a reasonable long-term investment strategy, and financing, to achieve the decarbonisation of these economies by 2050 is noticeably lacking.

A decade on from EU accession, the member states in the east have duly taken on board some ‘Brussels lessons’: how to please the European Commission on paper, while pursuing their respective business as usual agendas in keeping with the motto “give us the money and leave us alone”.

Rather than picking up and running with the Commission’s baton to take investments decision now that will make their economies cleaner, leaner and lighter, that will create new jobs, and that will decrease energy import dependency and stop the further exploitation of the planet’s natural resources, CEE member states remain wedded to short-termism and discredited investment plans. Planned EU funds support for government-friendly big polluters looms large in the spending plans, as does the further wastage of scarce materials – waste incineration is labelled as ‘energy recovery, a blasphemy trying to veil the underlying paradigm. More roads are to be built, at the expense of alternative means of transport. Above all, citizens are being frozen out of the EU funds game yet again, not only in terms of decision-making, but also when it comes to receiving EU funds for their own, citizen-driven projects.

In net financial terms, the CEE countries are far from being less well off than in the previous 2007-2013 funding period, as the graph below illustrates. 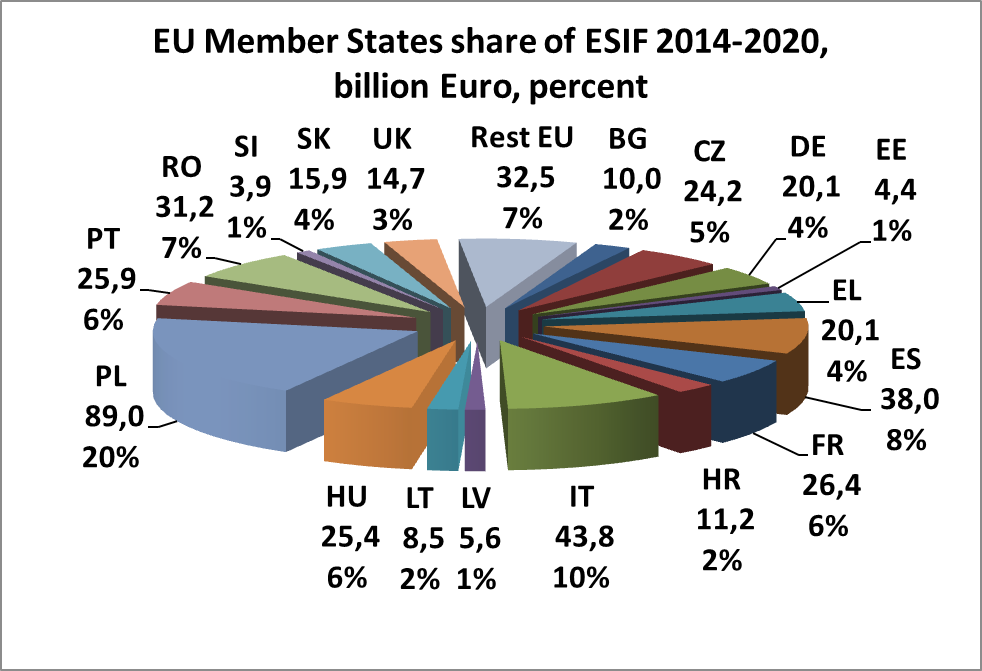 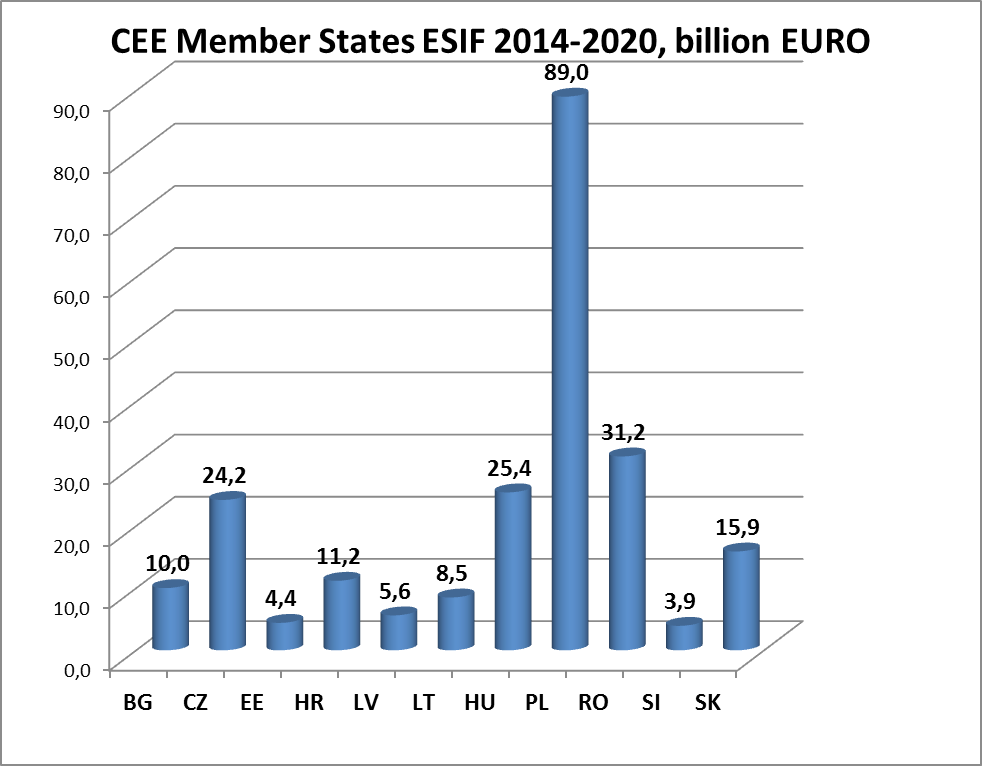 With Poland receiving by far the biggest chunk of the pie with EUR 89 billion, followed by Romania, the Czech Republic, Hungary and Slovakia, the EU funds will continue to play a crucial role in CEE countries’ overall investment plans.

Reducing greenhouse gas emissions is one of the EU’s targets for 2020 and beyond. This will be hard to achieve if Cohesion Policy, the second largest EU budget item, does not contribute to this goal. Other than considering whether the overall amount allocated to climate action within Cohesion Policy for 2014-2020 is sufficient, attention also needs to be given to whether certain supported investments will contradict the goal of combating climate change. For example, exclusive support for road transport infrastructure can lead to increased traffic and related emissions if a sustainable transport strategy is not in place. Unfortunately this is often the case across CEE.

All programs supported by the EU funds should be assessed in terms of their impact on greenhouse gas emissions and alternative, less emission-intensive scenarios should be seriously considered. A number of practical tools and procedures are now in place, such as the European Commission’s ‘CO2MPARE’ or the Strategic Environmental Assessment (SEA), which is required for most Operational Programmes (OPs). Yet the member states appear to be failing to deeply assess the strategic climate impact of their spending plans.

Proper, rigorous carrying out of SEAs for member states’ spending plans is not only legally required, it is the EU’s key tool for ensuring strategic coherence in achieving sustainable development. However, certain governments, blinded by their ‘national energy mix’ considerations, look to be getting away with maintaining their addiction to coal (Poland), nuclear (the Czech Republic) or oil shale (Estonia) – in part via forthcoming EU money. By reducing SEAs to a mere ‘tick box’ exercise, a good opportunity to do long-term planning in harmony with the environment is being lost.

A new, prominent role for EU Cohesion Policy stakeholders, i.e. local authorities, businesses and civil society organisations, was foreseen for the new period, in a bid to increase ownership and improve spending implementation. This so-called ‘partnership principle’ was further strengthened in the Cohesion Policy legislation. By now, member states should already have developed good practices in including partners such as civil society in all stages of the programming and implementation of EU funds. This is unfortunately not being witnessed.

Only in a few countries can real dialogue and early involvement in setting priorities for the EU funds 2014-2020 between authorities and social partners be observed. In addition, member states are appearing reluctant to make partners eligible to receive funding, although the legislation specifically foresees instruments such as Community-led Local Development (CLLD) or Technical Assistance and global grants which could be managed and redistributed, for example by NGOs.

While Cohesion Policy 2014-2020 does foresee increased funding for catalysing the transition towards the low-carbon economy (including priorities such as energy efficiency, renewable energy and sustainable public transport), the funds are mostly being lined up to benefit local governments or big companies.

In terms of energy efficiency in buildings, the refurbishment of public buildings is a priority in most programs, while the need to renovate residential buildings is only modestly addressed, ignoring – for example – opportunities opened by innovative financial instruments as proposed by the European Commission. The opportunity to significantly reduce CO2 emissions, as well as to create new jobs and reduce the threat of energy poverty, highly relevant in all CEE countries, is set to be missed.

As for renewable energy, the tendency appears to be to plan support for large installations, while the focus should rather be on small, community-owned or citizen-owned installations, improving regional and local energy security and providing an opportunity for communities and citizens to actively engage in the clean energy transition. Meanwhile citizens’ initiatives, such as community-owned local renewable energy projects, still cannot tap into EU funds sufficiently deeply to get their community projects running.

Transport has traditionally been a sector supported heavily by Cohesion Policy – with all the related environmental and climate impacts. Improved road infrastructure generates increased car traffic with its accompanying externalities, including CO2 emissions, air pollution, congestion, noise, accidents and ecosystem fragmentation. If the railway system is not developed at the same time – as has been the case in Poland – it quickly loses its share in freight and passenger transport to roads.

Emissions of greenhouse gases from transport are still growing across Europe. In order to reverse this trend, Cohesion Policy needs to concentrate investment in environmentally-friendly modes such as rail and clean urban transport. With a modal split currently biased towards road transport, it remains a riddle that perhaps only governments can answer as to how they are going to achieve a 60 percent GHG reduction target by 2050 in the transport sector.

Related to emissions stemming from the transport sector, polluted air remains a key environmental problem across CEE. The top ten places in the rankings of cities with the dirtiest air are occupied mostly by cities in Bulgaria and Poland (including Krakow, Poland’s second largest city and historic capital). This is having severe impacts on human health.

The European Commission has been insisting on using Cohesion Policy to help solve the problem of air pollution, including replacing old-fashioned heating based on coal and reducing car traffic in city centres. Unfortunately, in most countries, the OPs do not clearly address air pollution as such, although some planned investments, including for energy efficiency in housing and public transport, can contribute to solving the problem.

And even though nature protection is highly relevant to Cohesion Policy, as it can help create jobs and build sustainable local economies, this opportunity is only being marginally (in terms of money allocated, and measures chosen) taken up by the member states. Even worse, many investments in sectors such as transport, water management or even renewable energy may seriously threaten the still abundant natural environment in CEE countries.

Natural solutions need to be prioritised over technical ones whenever possible. Sustainability criteria in areas such as energy from biomass or flood protection should be a key instrument to prevent investments which damage nature. Unfortunately, though, the member states in the east still appear stuck, all too often, in the ‘big-concrete-is beautiful’ mentality – an approach that is wedded of course to the ‘infinite GDP growth’ paradigm, however much this is untenable and increasingly being challenged in mainstream economic discourse.

Are we set to see, then, another lost decade that instead should be ushering in eastern member states’ transition to renewables-based and resource-efficient economies – ones that function within the planet’s limits?

The remaining weeks in the EU budget 2014-2020 negotiations offer a final opportunity for a reality check and for vital new thinking to flourish still. Shaking off the short-term shackles of GDP, new concepts of ‘well-being’ can set the benchmarks for EU regional development funding. This change of perspective can happen anytime, anywhere, even now and even in the countries of CEE. The EU funds can help usher in the deep-rooted economic transformation needed now more than ever.

Bankwatch’s latest assessment of how the draft EU spending plans are shaping up in central and eastern European member states is available at: https://bankwatch.org/publications/eu-funds-draft-spending-plans-reveal-flaws-environmental-mainstreaming-central-and-east

Back to Bankwatch Mail 60