This summer’s ‘silly season’ featured a blog post on the EBRD website replete with the claim that the bank has helped turn Serbia into a “role model for social inclusion of Roma”. This claim immediately rang hollow in light of the ongoing plethora of abuses of Roma rights in Serbia.

In tandem with our Serbian member group CEKOR, Bankwatch has been monitoring the rights of Roma communities living in Belgrade for several years now, paying particular attention to the resettlements taking place in order to accommodate EIB and EBRD funded projects such as the Gazela Bridge, Sava Bridge and adjacent roads.

Belgrade authorities have an alarming tendency to resettle Roma families without proper prior notice and consultation, in the process separating families and relocating people to far away places and in improper conditions. Amnesty International has repeatedly condemned the manner in which such resettlements are done, claiming that Serbia is breaking its international human rights obligations. 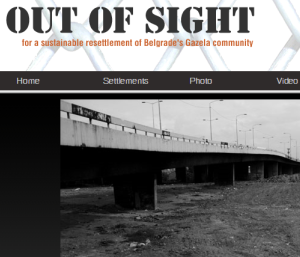 The ‘Out of Sight’ website presents the stories of families displaced by construction on Belgrade’s Gazela bridge.

It was therefore surprising to read the EBRD congratulating itself for its involvement in a recycling initiative offering Roma people employment in Belgrade. While the recycling initiative is certainly laudable, what was striking about this bit of news was the EBRD claim that the project has allowed Belgrade to become a role model for social inclusion of Roma.

The recycling centre in question is intended to help the reintegration of Roma, including those that have been resettled because of the construction of Gazela Bridge, planned to be financed by the EIB with the resettlement technical assistance carried out by the EBRD. The Gazela resettlements were a huge human rights scandal, and a recycling centre – as welcome as it is – can only be viewed as a start towards providing proper solutions for these forcefully displaced people.

Here, unfortunately, is what else has been happening of late to Roma communities in Belgrade.

On 26 April this year, 100 out of more than 240 families forcibly evicted from Belgrade’s Belvil settlement (a community resettled because of constructions related to the Sava Bridge) and who were not Belgrade residents were bussed out of the capital and taken to towns and cities across the country. Five families that were returned to the southern Serbian city of Nis – 18 people in all, including children and a new-born baby – have had a particularly hard time. They spent three months in an abandoned warehouse, with no proper sanitation or electricity and only in late July finally received access to running water. For this, Amnesty International has accused the Belgrade authorities of breaking their international human rights obligations.

Moreover, as part of the resettlement processes related to both the Gazela and Sava projects, Roma people have been resettled in metal accommodation containers on the Belgrade periphery far from their income source of recycling activities. Here they have not been permitted to collect or store waste items that they can recycle or sell at the sites.

In the case of the Gazela Bridge, 61 families have been bussed to southern Serbia from the Gazela Bridge environs in spite of already having emigrated from there due to the lack of income opportunities. Around 114 families from Gazela Bridge were bussed to the outskirts of Belgrade and given accommodation in metal containers.

More widely, and most importantly, Serbia still lacks a national legal framework for resettlement, displaying a total lack of political will to solve the problems of Roma and other vulnerable groups in Serbia. Belgrade still does not have an action plan for the inclusion of Roma, and instead is adopting a piecemeal case-by-case approach, with standards depending on whether international financial institutions are involved or not. In cases where these bodies are not involved, resettlement simply consists of eviction, with no alternative accommodation provided.

According to the Serbian government, “there are some 600 Roma settlements in Serbia and over 100 in Belgrade alone”. In Belgrade there are around 30,000 Roma who continue to live in sub-standard, unhygienic settlements without adequate or – in many cases – any services.

Against this troubling background, the recycling centre highlighted by the EBRD near the Orlovsko Naselje container settlement in the Zvezdara district started operations in 2011, with about 30 informal waste collectors – mainly Roma – organised in a co-operative, and able to make some earnings through the centre. In 2012 the number of collectors is predicted to rise to between 50 and 100. This is a good start and the initiative is praiseworthy.

However, inflating this small ray of light into the idea that Belgrade has in general become a role model for social inclusion of Roma is not only dishonest but may also make it much harder to promote Roma rights in the city. As might be expected to happen, the EBRD’s clumsy publicity resulted in an outburst of self-congratulatory articles in the Serbian media.

The plight of the Roma in Belgrade was raised at the beginning of September with Sir Suma Chakrabarti, the new president of the EBRD, during a meeting with Serbian civil society. Jovana Vuković, director of the Belgrade-based human rights NGO Regional Center for Minorities, expressed concern over the failure of the EBRD and the Belgrade and Serbia authorities to provide for people resettled in metal containers as a result of the Gazela project in 2009. Vuković called on the EBRD to take responsibility and provide support for a long term housing solution, as well as the need to produce a strategy to support the resettled population’s efforts to find employment and a decent standard of living.

Chakrabarti expressed surprise that the situation is so grave and pledged that he would personally request a revision of the process, the formulation of a plan to assist the economic activity of the resettled population and that a plan for long term housing would be provided for all the resettled families affected by the Gazela and Sava projects.

Find out more: The ‘Out of Sight’ website promotes sustainable resettlement of Belgrade’s Gazela community.