On November 30, the same day as the national government was under fire in the most heated protests Slovenia has seen in years, Slovenia’s ministers of finance and infrastructure added fuel to the flames by signing contracts with Simon Tot, director of the Sostanj lignite power plant for the controversial EUR 1.3 billion Sostanj Unit 6. These contracts prepare the ground for the signing of a state guarantee contract for a EUR 440 million loan from the European Investment Bank (EIB) for the project.

In July this year Slovenia’s parliament approved a state guarantee under certain conditions, such as had been laid out by the government in February, including: keeping project costs below EUR 1.3 billion; completing Sostanj Unit 6 construction by 15 February 2016; keeping carbon emissions under a certain level and the maximum price of lignite at EUR 2.25/GJ, and; ensuring that the project has an internal rate of return of at least nine percent. These new contracts commit the Sostanj power plant company to ensuring that these conditions are met. 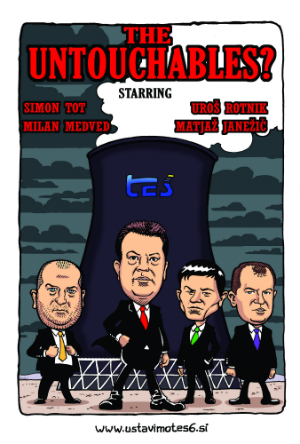 (A campaign cartoon portraying the former and directors of the Sostanj lignite power plant.)

In a report from February 2012, the Slovenian Commission for the Prevention of Corruption issued strong warnings that:

“the project [Šoštanj Unit 6] is designed and implemented in a non-transparent manner, lacks supervision and is burdened with political and lobbying influences, and as a result there has been [and still is] a high risk of corruption and conflict of interest”.

In the same report, specific concerns were raised about acts of corruption that may have interfered with the tender process for the plant’s construction, to the benefit of Alstom, the French company that won the construction contract in June 2008.

The EBRD is also awaiting the outcome of decisions on the state guarantee for the EIB’s financing of Šoštanj Unit 6 before disbursing its own funds, reckoned to be a potential EUR 100 million loan package for the plant’s construction.

The main stumbling block, however, is that some of the conditions laid down by the government are virtually impossible to meet. Projections about the project’s profitability have never even come close to the desired nine percent mark, and the chances of achieving it are diminishing as time goes on. Keeping the lignite price below EUR 2.25/GJ is also unrealistic given that it already cost EUR 2.7/GJ in 2011, and as the Velenje lignite mine becomes exhausted – projected to happen at around the same time as Sostanj Unit 6 comes to the end of its life – it is hardly likely to get cheaper.

According to Slovene media – the newly signed contracts have not been made public at the time of writing – the answer to these problems has been to move the goalposts and accept lower profits and higher lignite prices.

The state guarantee for the EIB loan still has to be discussed by the Slovene government and ratified in the parliament. If it gets that far, the EIB faces a serious test of its credibility.

On the one hand, the bank must be under significant pressure to hand over the money. But on the other hand, state guarantee or no state guarantee, there are still several investigations ongoing into suspected corruption in the project. Handing over the money while these processes are still ongoing would seriously damage the EIB’s integrity and status as ‘the EU’s bank’.

Tough decisions, but we are counting on the EIB to do the right thing and refuse to disburse financing until the Sostanj corruption investigations are concluded.

Comprehensive background information on the Sostanj lignite thermal power plant unit 6 is available on our website.