A barely eight kilometre long section of an express road in central Poland is becoming another battlefield in the long-running conflict between Polish road authorities on one side and European biodiversity protection laws, and environmental NGOs trying to uphold them, on the other. Except this time, it’s not just about the law – it’s also about the money.

The road is the S7 expressway, one of Poland’s main transit routes, running north to south and connecting Gdańsk, Warsaw and Kraków. A short section of this road, between the town of Skarżysko-Kamienna in central Poland and the border of the Mazovian region, has become a hotspot for environmental, technical and formal problems – problems so obvious that, after more than seven years since the project’s conception, the developer, Poland’s General Directorate for National Roads and Motorways, has been unable to secure either a final set of construction permits, or financing.

This can be considered a so far small success for the environmental watchdog organisation which has been campaigning against this project since 2008. Local NGO Pracownia na rzecz Wszystkich Istot (Workshop for all Beings) has brought complaint after complaint to the courts and administrative bodies, citing European biodiversity and habitat directives in a bid to stop construction of the road as it is currently planned.

The stakes are high because, according to an independent evaluation carried out over the past few months by independent scientists and researchers, building the eight kilometre section would cause severe harm to the natural environment by cutting through a major ecological corridor, impacting the neighbouring Natura 2000 sites and devastating some of the most important habitats for protected butterfly species. 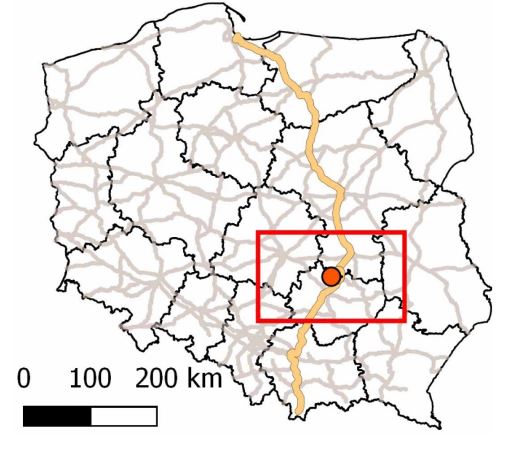 Workshop for all Beings has been consistently pointing out the formal and environmental shortcomings of the S7 project – and the Polish courts have been listening. An environmental decision was made void and construction permits were annulled (pdf), leaving the project developer to repeat the application process. But neither the opposition nor the lengthy proceedings to date have discouraged the investor.

Indeed the General Directorate for National Roads and Motorways, a government body, is continuing to aggressively push forward the project in its original, controversial form.

With the required permits currently appealed in courts, the project should have no legal foundation. In spite of this, the General Directorate’s apparent readiness to adjust and amend the route remains no more than a smokescreen. While publicly declaring its willingness to find a constructive compromise, during the autumn months the promoter has taken further ominous steps to build the road, including fieldwork and granting a contract for implementing a highly experimental mitigation measure intended to resettle the butterflies threatened by the construction.

Jumping the gun and manoeuvring in this way before the requisite permits are fully signed off by the law courts, the arrogance behind the investor’s actions is staggering but not entirely surprising.

The General Directorate’s willingness to disregard procedures and agreements and move forward with the S7 project is likely a consequence of the recent change in Poland’s political climate. Following the general election victory of PiS in late October, Jan Szyszko is once again Minister of Environment. Szyszko was a notorious supporter of a high profile road project proposed more than ten years ago to run right through the precious Rospuda Valley Natura 2000 site in north-east Poland. And there is growing expectation that the new government will be even more lenient towards public bodies which opt to blatantly infringe European environmental laws.

European institutions, including the EIB, called on to act

Except it’s not just the Polish courts and watchdog NGOs following this case now. A complaint related to the infringement of EU law has been lodged with the European Commission and the Committee of Petitions of the European Parliament, bringing the S7 case to the attention of Brussels.

Since 2014, Workshop for all Beings and Bankwatch have also been engaging with the European Investment Bank (EIB), one of the sources of funding for the S7 section, in an effort to prevent the institution from financing the faulty project. The bank’s Complaint Mechanism is currently looking into the S7 case, following a further complaint (pdf) submitted by Workshop for all Beings and Bankwatch pointing out the deficiencies in the project’s design and execution.

The campaigning NGOs welcome the European institution’s apparent commitment to ensuring that the project is aligned with EU rules and regulations, because in light of the recent moves made by the project promoter it has becomes very evident that the national authorities are not ready to abandon this high impact investment.

The EIB is not the only source of funding for the controversial road section – the construction of the S7 expressway is also to be supported by the European Cohesion Fund 2014-2020 under the biggest Polish investment plan: Operational Programme Infrastructure and Environment.

The implementing authorities indeed have decided to disregard the many environmental issues as well as the uncertain legal status of the project and recently signed a financing agreement with the General Directorate, agreeing to grant it more than EUR 150 million for the S7. Disbursal of this money, though, is ultimately dependent on a green light from the European Commission following a project assessment.

With Poland’s road authorities stubbornly pushing the S7 project forward without any real consideration of alternative solutions (Workshop for all Beings continues to propose alternative routes for the contentious road section) or willingness to improve the project’s design, European money is on the line for financing another Polish road investment which blatantly violates EU standards, infringing on valuable natural habitats and EIA directives.

If ever there was a time for the EU to take a closer look at the kind of development it is helping to finance in Poland, it is now.