Home > Publications > The EU budget needs to be greener, not leaner and meaner

The EU budget needs to be greener, not leaner and meaner

It is now widely acknowledged that there is enormous potential to reap environmental, social and economic dividends through improving the energy efficiency of Europe’s 160 million buildings. And yet actual investments in energy efficiency measures remain very small in comparison to this potential. To achieve the EU objective of a 20 percent improvement in energy efficiency by 2020 (from 1990 levels), the European Investment Bank estimates that EUR 85 billion per year is needed, with EUR 60 billion per year required for buildings alone. The forthcoming EU budget for 2014-20, currently being negotiated, has a vital role to play here, for both Europe’s more developed and less developed countries.

The future budget seeks among other things to deliver Europe 2020 objectives, and thus supporting the shift towards a low-carbon economy in all sectors is paramount in the European commission’s budget proposals to date. Backing this up, a figure of at least 20 percent of the total budget for climate change related activities has been put on the table by the commission. More specifically, a doubling of current allocations for energy efficiency and renewable energy to EUR 17 billion has also been proposed under the European Regional Development Fund.

Given the scale of the challenges we now face, these figures should be higher – some members of the European Parliament have recently been vocal in calling for this 20 percent ‘climate mainstreaming’ to be bumped up to 30 percent. Meanwhile, with certain of the EU’s larger member states calling for real terms cuts in the future EU budget, there are growing fears that the budget’s climate potential could be seriously impaired. Here’s why this must not happen.

EU funds could really make a difference, bridging the gap between local schemes that lack finance but that have every likelihood of succeeding.

Kirklees Council in West Yorkshire, where I serve as a Green Party councillor, has been a leading local authority in the UK in addressing fuel poverty and improving the energy efficiency of people’s homes. An insulation programme that we implemented between 2007 and 2011 offered free loft and cavity wall insulation to all households irrespective of income or tenure. Thousands of homes were insulated and Kirklees is recognised by the UK’s Department of Energy and Climate Change (DECC) as the council in the UK that has been most successful at insulating its housing stock.

The question now for Kirklees and hundreds of other councils up and down the UK is: where next?

The UK government’s ‘Green Deal’ that has just been launched aims to improve insulation in 14 million of the UK’s leaky homes. However, there is scepticsm from many quarters as to whether or not the Green Deal is fit for purpose. For one thing. the loans offered to improve the energy efficiency of people’s homes under the Green Deal are expected to be offering interest rates at around the seven percent mark, while in Germany similar loans are offered at one percent. 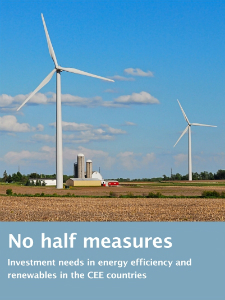 This Bankwatch study examines how much money is needed to create jobs and reach Europe’s climate targets. Assessing seven countries in central and eastern Europe, investment needs of EUR 172 billion over seven years were identified for energy efficiency and renewable energy programmes.

David Kennedy, chief executive of the government’s official advisors, the Committee on climate change, has warned of the Green Deal’s finance model: “We think there is a significant risk in leaving it to the market, as that has never worked anywhere in the world and is unlikely to happen in the UK.”

The Green Deal’s unique selling point is that the loans offered to home-owners are supposed to be more than covered by the savings made as result of the measures installed. This is called ‘the Golden Rule’, but more expensive measures such as solid wall insulation will have to be highly subsidised by the utilities through the Energy Company Obligation.

Consumer resistance to solid wall insulation is expected to be high mainly due to aesthetic reasons. The Golden Rule is not guaranteed and changes in people’s circumstances or how they use the home could impact negatively (or positively) on savings made. Industry is expecting a slow start for the Green Deal and in traditional loft and cavity wall insulation sectors a downturn in orders and staff redundancies seems likely. Early attacks on the Green Deal from the UK press are underway and will probably accelerate as the scheme is launched.

The Green Deal is being introduced at a time when ‘feed in tariffs’ for solar PV and other renewable technologies are being massively cut, leading to a reduction in capacity in the micro-generation sector. It is against this backdrop that the UK’s ability to achieve an array of EU environmental targets must be judged.

When asked DECC officials are bullish about being able to hit the EU target for 16 percent of total energy from renewable sources by 2020. The evidence would indicate otherwise, particularly with regard to the renewable heat and transport sectors.

Positive action in the UK on energy efficiency is likely to occur where local authorities and energy utilities disregard problematic policies such as the Green Deal and instead develop their own programmes. Local authorities have the ‘reach’ for this. They have access to community networks and to a great extent the trust of their communities as official bodies where people feel they have a recourse if they have concerns.

Energy utilities do have funding of GBP 1.3 Billion per year through the Energy Company Obligation, but if matched funding is required to make a scheme fly then local authorities like many public bodies are highly constrained both in terms of capital and revenue expenditure.

This is where EU funds could really make a difference, bridging the gap between local schemes that lack finance but that nonetheless have every likelihood of succeeding.

The best route for such EU funds at a time of limited budgets would be via a route where councils and energy utilities have to demonstrate the robust nature of their proposals in terms of delivery as the key to open EU funding. High quality, ‘deep’ renovation proposals are essential here – cosmetic fixes such as replacement windows should be a non-starter. And the UK could maximise leverage on EU funds to co-finance projects if the UK government sets the EU funding element to cover 75 percent of costs. This will ensure we get more back from the EU on projects that give us a better deal from Europe, and certainly a greener one.

Designing such a programme coud be developed in conjunction with the Local Government Association (LGA), the representative body for councils in England and Wales. The LGA is regularly engaging with DECC on government policy and is one of the most informed bodies in the country on the delivery of energy efficiency programmes.

These are difficult times for many sectors of industry, but through imaginative links between the EU and local government bodies in the UK, we can produce imaginative and effective programmes that deliver carbon and financial savings while generating jobs and, for many, much needed hope.

Andrew Cooper has been a Green Party Councillor in Kirklees, West Yorkshire, since 1999. He has worked in the housing and energy sector since 1993 when he became Kirklees Council’s first Energy Efficiency Coordinator.