The Oil Road – How a done deal continues to unravel 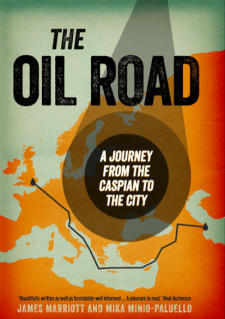 The Oil Road by James Marriot and Mika Minio–Paluello is a remarkable recounting of their journey along the Baku-Tbilisi-Ceyhan (BTC) pipeline from Azerbaijan to the City of London. It is a narrative peppered with a wealth of cultural, social and economic history and kaleidoscopic insight from the Caspian region and beyond.

Half way through The Oil Road, James Marriot and Mika Minio–Paluello’s remarkable recounting of their journey along the Baku-Tbilisi-Ceyhan (BTC) pipeline from Azerbaijan to the City of London, a narrative peppered with a wealth of cultural, social and economic history and kaleidoscopic insight from the Caspian region and beyond, there is an extract from Turkish writer Yasar Kemal’s Ince Memed:

‘Poor farmers always make room for a calf in their home, close by the fire, next to where they lay their own beds. They bed the calf in fresh grass mixed with flowers. The hut then smells of spring flowers, of grass, of calf-dung and of the young animal. The smell of a calf is like the smell of milk. If anyone opened his hand wide to caress an ear with the palm, he would feel a pleasant thrill, it was so soft and cool.’

The Oil Road is about less pleasant things: it is a forensic analysis of how poor farmers, hundreds of communities and entire nations – not to mention their sovereign legislatures – have been forced to make room for BP’s BTC pipeline and, more widely, western energy imperialism with its attendant financial support structures.

This ‘making room’ for the BTC pipeline has involved a catalogue of abuses, from poor (or just no) compensation for land acquisition, the harassment and intimidation of villlagers and activists alike by security services, through to cover-ups over the pipeline’s integrity and a major explosion that took place in Refahiye in northern Turkey in August 2008, three years after the pipeline opened.

Compensation efforts via among other things BP’s Community Investment Program (CIP) have been widely hailed by the company and international investors as evidence of the project’s ability to deliver ‘sustainable development’. As a counter balance to this, The Oil Road presents evidence of how NGOs (or rather GONGOs – ‘government supporting NGOs’) in the BTC countries have taken the money to shill for the pipeline.

One standout moment in the book comes when Minio–Paluello, on patrol with a camera in a Turkish village next to the pipeline, is confronted by an NGO representative administering the BTC CIP: “I will stop you, I’ll smash your camera,” they are told. With incriminating video footage concealed in a sock, Minio–Paluello is then carted off for several hours of state police detention.

Progressing further into The Oil Road, the more it assumes the detective-thriller genre – and not just because of the authors’ regular observing of BTC workers in orange jumpsuits and hard hats, evocative of those helpless minions serving so many James Bond villians.

The air of cover-up resonates throughout the book, not least with regards to its financing. Private banks financing the BTC deal, including Royal Bank of Scotland, went along with 157 violations of the Equator principles.

The EBRD and the IFC also had to bend their rules in order to provide former BP CEO John Browne not just half a billion dollars of public finance but also priceless ‘political comfort’.

In the heart of London in early 2009, the authors learn from a key BP investor that BTC is a ‘done deal’. Other than its enjoyable, educational scope, the biggest compliment I can pay this book is that it is an eye-opener, bringing the BTC pipeline’s problems that persist into full view – and I say that as someone intimately involved in the BTC campaign in 2003 and 2004, and for whom too the project has taken on, regretably, a certain ‘done deal’ aspect.

This is reportage of the highest calibre. As PLATORM’s Marriot and Minio–Paluello relate their shadowing of the BTC pipeline’s marker posts in the ground, they lay down their own vital markers: not only for western consumers and BTC communities but for other people facing up to fossil fuel fantasies in the name of development, fantasies that continue to be bankrolled by western capital’s finest public and private financiers.

The Oil Road is published by Verso Books