Home > Publications > When in hole, stop digging: lessons from the Ombla hydro project in Croatia

When in hole, stop digging: lessons from the Ombla hydro project in Croatia

At the time of writing, it is highly uncertain what the future holds for the controversial 68 MW Ombla underground hydropower plant. Approved for financing by the EBRD back in 2011, only recently has a nature impact assessment study finally been published, and no final opinions have been given by either state institutions or the EBRD on whether the project is to go ahead.

Yet even now, one thing is for sure: this project has to be one of the best case studies from recent times on how not to develop a project, and EBRD staff would do well to examine it as part of the review of the bank’s Environmental and Social Policy this year.

Lesson one: Projects which are several decades old are not likely to be that great

The Ombla hydropower project has been around at least since the early 1980s, in what was then Yugoslavia. It received another few jolts of life at various points in the 1980s and 1990s, but is not mentioned by name in Croatia’s 2009 Energy Strategy. It suddenly appeared in a January 2011 government wish-list of priority infrastructure projects, which had apparently been developed without any analysis of actual needs, and certainly with no public consultation. 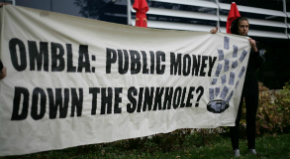 Given this background, the chances that the project would serve today’s needs were slim. Indeed, a leaked report by consultants hired by the EBRD to examine Ombla pointed out that it will produce least power during the low water summer season. Yet this is exactly when the Dubrovnik area most needs electricity due to the high tourist season.

Lesson two: Projects which are not ready should not be approved

The project was approved in November 2011 before any of the most serious criticisms presented by the public had been properly addressed. Civil society organisations repeatedly asked the bank what the hurry was, but never received a satisfactory answer.

It seems that the project was simply approved prematurely for political reasons. HEP, the project sponsor, is well-known as a company which successive Croatian governments have used to provide jobs for their favoured allies and which dictates the government’s energy policy. Thus signing the project a few days before a general election in which Croatia’s government changed helped to ensure that the project survived the change to a coalition which had declared itself to be against the project in its pre-election manifesto.

The EBRD has shown a remarkable lack of concern about the fact that Ombla is not part of any plan or programme that has been subject to a strategic environmental assessment. This means that alternatives to the project were not examined while all options really were still open, and that the public was denied an opportunity to comment on the wider environmental issues around the energy sector in Croatia.

In addition, the environmental impact assessment (EIA) for the project was carried out in 1999, back in the days when Franjo Tudjman was still dictator in Croatia – hardly likely then that the study would meet today’s standards. The EBRD tried to patch this up by publishing the study on its website in summer 2011, but local affected people were not aware of this and were not consulted at all until early the following year. In September 2011 Croatian civil society groups pointed out several serious weaknesses in the EIA study and process, but the project was approved by the EBRD all the same. As the EIA had been approved years earlier, there was no legal recourse mechanism available under Croatian law.

When the project was approved, a condition was set that HEP would have to carry out an appropriate assessment according to the EU Habitats Directive before financing would be disbursed. Now, a year and a half later, this assessment has been carried out and confirms that the construction of the Ombla hydropower plant would have irreversible impacts on the Vilina Cave – Ombla Spring system and could permanently destroy habitats that are set for protection as part of Croatia’s future Natura 2000 network.

However, rather than admitting that potentially wiping out tens of endemic species and destroying critical habitats should necessitate the project not advancing, the assessment concludes that the project will go on. The only possible explanation for such an incongruous conclusion lies in a January 2013 article in Croatian magazine ‘Globus’ that HEP pressured the consultants engaged in the study to water down their conclusions.

Now, in an interesting turn of events, Environment minister Mihail Zmajlovic is reported by Croatian media as having refused to issue an opinion on the study, given that it was carried out as an ad hoc demand by the EBRD outside of the Croatian legal framework. In other words, we have a host country minister maintaining higher standards than the EBRD. Hang on, isn’t that the wrong way round?

Background information about the Ombla hydropower project is available at:
https://bankwatch.org/our-work/projects/ombla-hydropower-plant