Home > Publications > Your lungs and voices are cordially invited …

Your lungs and voices are cordially invited …

Climate change is still, for a lot of people, an abstract, complex issue. It remains difficult to mobilise people against the coal industry as they are not always able to make the connection between fossil fuels, climate change and health problems such as asthma. The Cough4Coal campaign, to be formally launched during COP 19 in Warsaw, aims to invigorate and inform the debate on how we should plan for future sustainable and healthy energy provision.

People living in areas near coal power plants or coal mines often have conflicting interests, as they or their family members may well be dependent on the industry for their jobs and livelihood. Yet an underlying, day-to-day reality for people living in front line communities is that the coal industry causes asthma and other health issues for them and their children.

The issue of coal’s health impacts is increasingly gaining public attention, with a number of reports published around the globe in 2013 receiving extensive media coverage in Poland and across Europe. However, for the general public, the facts related to ‘clean coal’ and health impacts are complex and often contradictory. 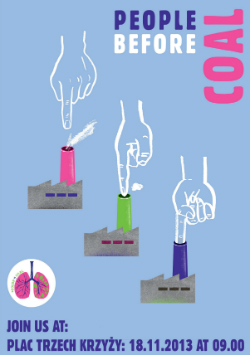 The action takes place November 18 at 9 am in Warsaw on Plac Trzech Kzryzy (see on map).

The International Coal and Climate Summit – ‘Clean coal technologies, opportunities and innovations’ – being organised jointly in Warsaw by the Polish Ministry of Economy and the World Coal Association on November 18-19, and parallel to the COP 19 meeting, provides an excellent opportunity to expose the contradiction between the energy sector development policy pursued by the Polish government and its role as host of the international UNFCCC.

Polish energy campaigner and Bankwatcher Kuba Gogolewski points out: “The coal industry’s promotion of cleaning up coal for the climate, which in reality would lock in huge amounts of greenhouse gas and air pollutant emissions for decades to come, will be exposed by showing coal’s toll on health. People from all across the globe will gather that day in front of the conference venue to show that there is no such thing as clean coal and bring attention to the impacts that coal mining and combustion has on the health of each and every one of us.”

Ahead of the Warsaw COP meeting, Cough4Coal has released a viral videoclip of a 7 metre breathing, and choking, lungs sculpture near a lignite mine. The clip is already mobilising people from across the world, coming to Poland to express their concerns about the climate, to take part in a lively rally in front of the Polish Ministry of Economy on the morning of November 18.

According to Kuba Gogolewski: “It is one of those days when everybody’s presence is needed to show to the coal lobby and international financial institutions, such as the European Bank for Reconstruction and Development speaking at the International Coal and Climate Summit about financing clean coal solutions, that there is no such thing as clean coal. Join us on November 18 to learn more and show the coal industry that it is us – the people – that are the force shaping the views of the politicians, and that the days of dirty money doing whatever it wants are over. Come dressed in white or as lively as you can – we are the life and the soul of this planet.”