Andrey Shingarev is standing on heaps of junk where once his home has been. He points at a hill where a spotless blanket of geotextile offers no reminder of the stinking, unstable and toxic junkyard that destroyed Andrey’s house.

On April 22, 2008 part of the Adler landfill, the main disposal site for solid waste in Greater Sochi, the host of the 2014 Olympic Winter Games, dissolved into an avalanche of soil, rocks and trash and raced towards residential houses nearby, damaging those of ten families.

Before the landslide, the mountain slope behind Andrey’s house got more and more covered in garbage that seemed to be sliding downhill like a stream of lava – and eventually did. The ugly sight was aggravated by a horrific smell and by smoke creeping through the valley – in the warmer seasons the dump was constantly smouldering. This is what the Adler landfill looked like in 2007 when Sochi was selected to be the venue for the 2014 Winter Olympic Games.

An unlikely site for winter sports 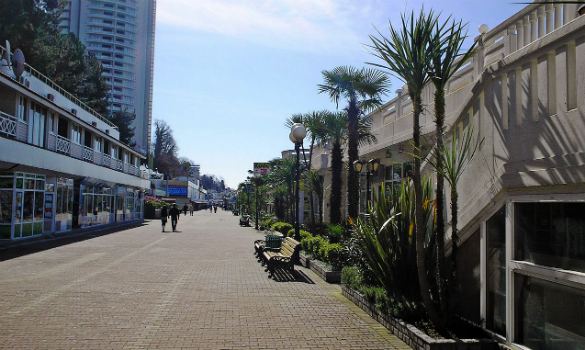 Located at the Black Sea, next to the border with Georgia, Sochi is a well-known summer resort with cypresses and palm trees lining the streets. Apart from skiing facilities in Krasnaya Polyana, 60km north-east from Sochi’s centre, infrastructure for winter sports was scarce when Sochi competed with Salzburg (Austria), the largest and oldest winter resort in Europe and the ambitious South Korean town Pyeongchang, which will host the Games in 2018. 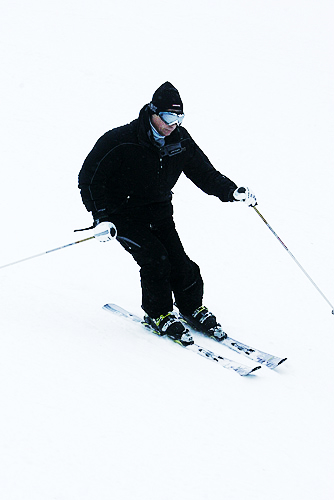 Promoters of Sochi presented the need for completely new infrastructure as Sochi’s main advantage. To build from scratch would be more efficient than to adapt existing sporting sites. But the exact opposite turned out to be true: the Sochi Olympics have become the most expensive of all time.

A great place to live

Far from the Olympic glamour, Andrey’s land sits on the bank of the small Herota river, tucked between mountains in the outskirts of Sochi. The river flows into the nearby Black Sea. “It seemed to be a great place to settle down when I got this land in 1992. The landfill was no problem back then”, Andrey says.

In the early nineties, as part of a privatisation scheme, Sochi authorities offered land plots for private use and Andrey Shingarev was among the first lucky ones to receive land on Petrozavodsk Street. The lower boundary of the landfill was a few hundred metres away. Back then, it was even considered an advantage by local farmers who used the fresh food waste as animal feed.

In 2000, farming had to be stopped due to the strong smell from the landfill that was creeping closer to the residential area.

150 families, almost all of the inhabitants of Petrozavodsk Street signed a collective letter to the Adler district administration complaining about the worsening situation and requesting a solution.

“We just couldn’t stand the stench anymore. We had to do something”, explains Andrey. “The waste was producing toxic substances right next to where people were living and growing food. The local administration didn’t do anything to improve the situation.”

Local authorities never formally replied to the letter. What happened instead proves that local landowners’ rights in Sochi don’t count much.

When the local administration sent a Municipal Commission to the houses in Petrozavodsk Street, including Andrey’s home, they saw the waste that was very close to Andrey’s property. Yet, instead of acknowledging the need to stop the landfill from spilling over to residential areas, the Commission’s report declared that Andrey’s land is ‘heavily littered’. “I told them ‘It’s not my rubbish, it is your city dump, but I was ignored”, Andrey says with irritation in his voice.

“I told them ‘It’s not my rubbish, it is your city dump’, but I was ignored.”

But not enough, based on the Commission’s report, the local administration fined Andrey for an administrative offense. The administrative court subsequently found ‘significant violations’ within the document and acknowledged that Andrey was innocent. The garbage near Andrey’s land, however, was never removed. 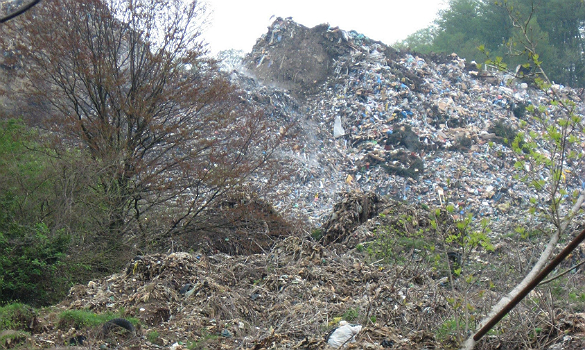 Only in 2006, when the dump already reached the residential area on Petrozavodsk Street, did the Sochi city government finally allocate 56 million rubles (appr. EUR 1.65 million at the time) for the construction of a retaining wall between the landfill and the residential buildings. But these funds were only enough for the excavation and construction of a concrete road. The wall itself was not built.

The sum pales in comparison with what is being invested in preparation for the Olympic Games. With an estimated 51 billion dollars (37.5 billion euros) Sochi’s price tag is almost four times the total cost of the 2012 Games in London. In addition to the mind-blowing corruption, it is the land shortage and the resulting high costs and lack of suitable sites for big constructions that make the preparations so expensive.

Also the lack of knowledge and proper planning of the organisers are increasing the costs and create additional strain for locals. When it emerged, for example, that one of the main requirements of the International Olympic Committee was the successful implementation of the “zero waste” principle, the authorities began to hastily close the municipal landfills, not knowing what to do with garbage and, most importantly, without solving the corresponding environmental and social problems.

The landfill closing in

One of these landfills was the one that caused the community on Petrozavodsk Street so much trouble. In 2006, when the reclamation of the landfill had not yet started, thousands of tons of garbage, which beforehand lazily crept towards Petrozavodsk Street, suddenly accelerated their pace. Over the course of three weeks, soil mixed with the waste, annihilated the road and entered into the stream of Herota. 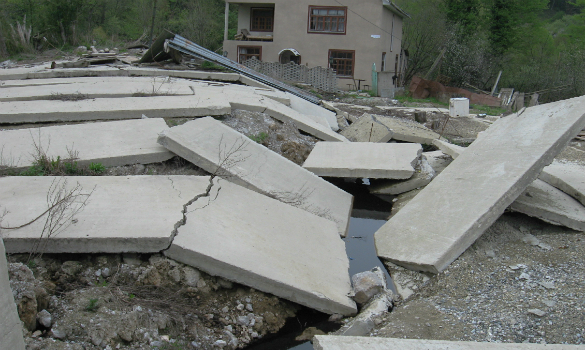 What had once been a road.

The inhabitants of Petrozavodsk Street now truly found themselves between a rock and a hard place: On the one side the foul and smouldering waste hill, filling the area with a sickening smell, on the other side the fetid waters flowing down the mountain slopes littered by waste.

The landslide also damaged the house of Andrey Shingarev so much that he had to move to the railway trailer on his property, while his wife and child were sheltered by neighbours. For two years, Andrey lived in the corrosion-pitted trailer without windows, doors or heating. The local administration suggested affected people to move but didn’t offer compensation to Andrey. 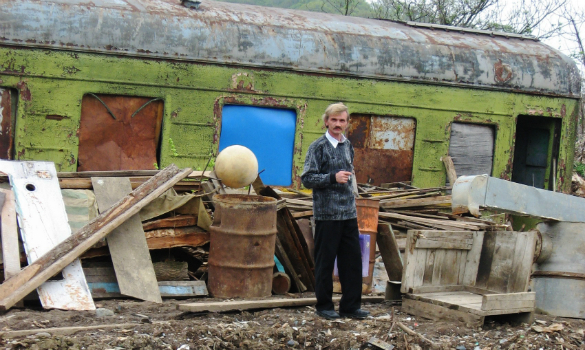 Andrey in front of his trailer.

It was not the help of Sochi authorities that put an end to this ordeal, but another catastrophe. On April 22, 2008 at exactly 8 am Moscow time, Andrey woke up from a strange rumbling, as if from an earthquake. The windows of houses closest to the landfill burst. And finally a hefty avalanche of soil, rocks and trash slumped from the hill and raced towards the houses. Within three hours the waste completely destroyed Andrey’s vacated house and severely damaged several others. 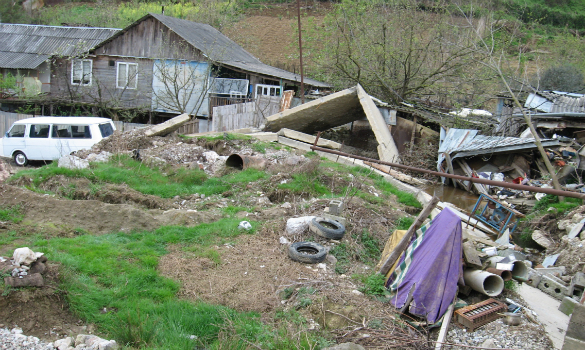 The devastation left by the avalanche of waste. On the right, the remains of Andrey’s house.

Only by way of luck and due to the timely arrival of emergency rescuers, none of the residents was injured. Experts later established that the landslide was triggered by rain water that leaked into the base of the landfill and functioned like grease on which the mountain of waste slid downward.

Since that day, Andrey’s family has no home and lives with relatives. The next three years in their lives were an endless struggle with authorities and courts in an unsuccessful attempt to obtain at least some compensation for their lost house and land.

The decision to go to court was triggered by two circumstances. Firstly, in 2009 a letter from the tax office asked Andrey to immediately pay overdue tax for his land – land that had been buried under a layer of waste for 3 years already. Secondly, Sochi authorities allocated more than half a billion rubles (about EUR 11.3 million at the time), partly for the relocation of residents of the unfortunate Petrozavodsk Street. As part of the “zero waste” requirement of the Olympic Games, all landfills in Sochi, including the Adler landfill, had to be reclaimed and the land rehabilitated.

Andrey’s family was not included in the resettlement programme. The Sochi City Hall argued that Andrey had no right to receive compensation because the land was not registered as his property. His registration of the land, however, was impossible because, swallowed as it was by the constantly moving landfill waste, it was unimaginable to properly mark out the land plot.

Andrey’s court struggle was unsuccessful. His family has lost everything, did not receive compensation and has no money left to pursue the case in front of the European Court of Human Rights.

Andrey’s trailer and the remains of his house. In the background, the path that the waste hill took is clearly visible.

At the Adler landfill, nothing reminds of the trash or the trucks and bulldozers from its transformation phase. The fenced area only contains equipment for the extraction of gas from the waste that’s decaying underground. In a few years, when the processes of decay are coming to an end, wells and fences will be removed and trees will be planted. It has become a showcase project for Russia.

Whether Andrey’s family will ever see the trees growing on the hill that used to be in their backyard is not sure. With Sochi becoming ever more shiny, Andrey’s family has to decide between moving to a cheaper city or remaining in their home town, where they can only rely on social benefits.