The use of international financial institutions to manage projects within the Green Climate Fund framework has been criticised as too far removed from communities and those affected by the investments. Recently approved projects, the biggest of them administered by the European Investment Bank confirm this view, despite willingness to include civil society. 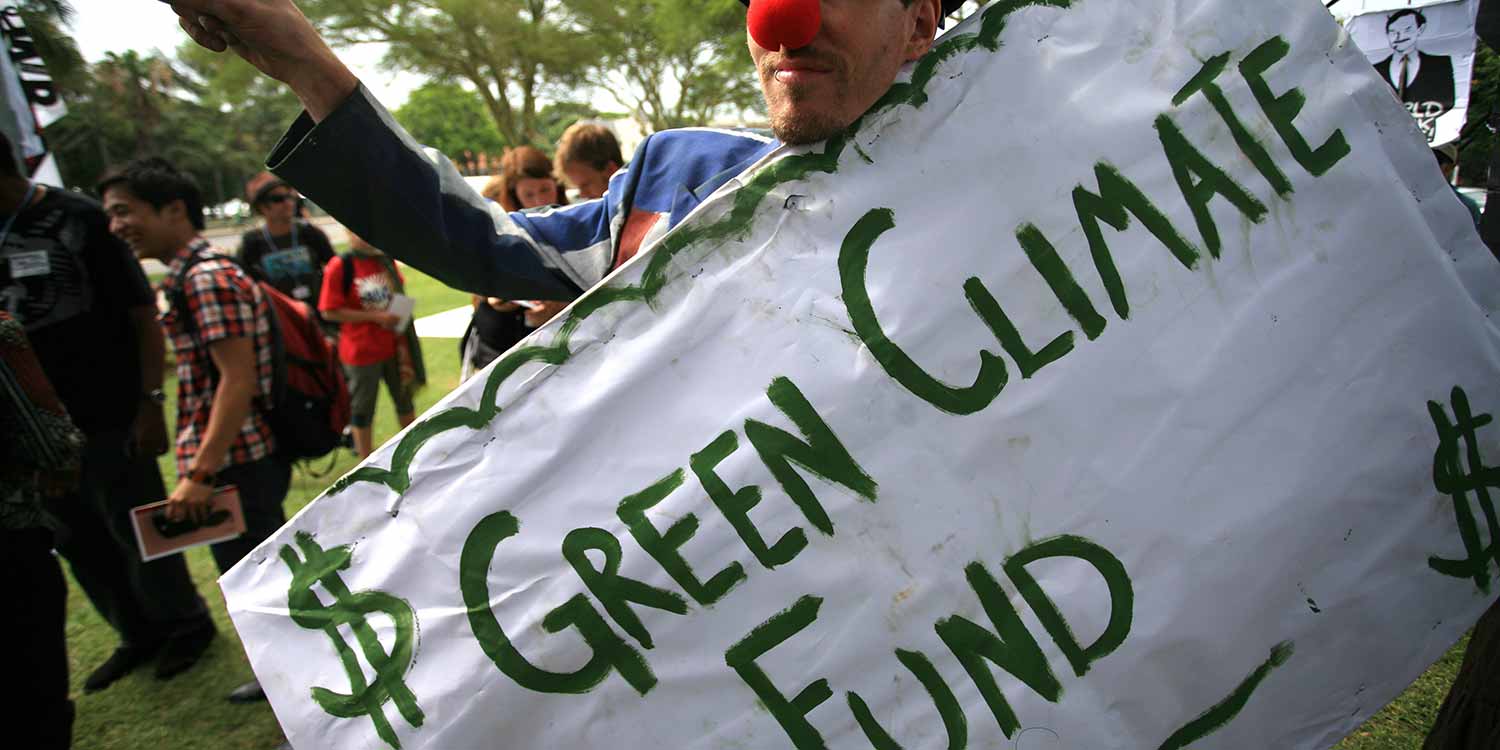 A rally against corporate capture of the Green Climate Fund held opposite the 2011 UN climate talks in Durban. (Photo by Luka Tomac for Friends of the Earth International - creative commons licence BY-NC-ND 2.0.)

Established as part of the UN Framework Convention on Climate Change ‘to address the needs of developing countries in overcoming the negative impact of climate change’, the Green Climate Fund (GCF) approved its first round of projects of 2017 earlier this month.  At the beginning of April, 8 new projects worth USD 755 million were approved, bringing the total number of projects under the fund to 45 and a value of USD 2.2 billion.

Typically recipient countries access the fund directly or, increasingly, via an international entity like international financial institutions. The reason for this is that the requirements for the smallest funding category are the same as for bigger projects. This bureaucratic hurdle creates competitive disadvantages for national or subnational entities that want to directly access the fund.

Civil society observers monitoring the activities of the GCF have warned about the lack of such small-scale projects. Big projects hide more risks and the potential for negative impacts by lower levels of transparency and the impossibility to track the variety of funds, contracts, projects and activities.

One recently approved project is GEEREF NeXt, administered by the European Investment Bank. GEEREF NeXt represents exactly the type of project that the GCF should not focus on.  It is a fund that will further distribute USD 765 million to other national funds. Instead of tackling specific climate issues, GEEREF NeXt will provide investments into a variety of subprojects in various funds to implement energy efficiency and renewable energy projects. It is unclear what these specific subprojects will be and what communities GEEREF NeXt will target.

Before the April GCF board meeting, the management of GEEREF NeXt discussed its proposal with civil society representatives, with the main topics covering the transparency of subprojects, the absence of criteria for hydropower and biomass energy sources, a commitment to paying taxes and the development of a gender strategy.

Some improvements to the project resulted from the discussions. Fund managers responsible for specific subprojects are obliged to report on how it meets particular standards, and a significant redesign of a Gender Strategy, Assessment and Action plan was made. Another positive is the new “Stakeholder Engagement Framework,” which might ensure that projects will be in compliance with the needs of local communities and other stakeholders.

At the same time, outstanding issues remain, the most significant being that the GEEREF team did not include criteria for biomass energy projects about what constitutes a ‘renewable’ source. In addition, there is a potential that the categorisation of hydropower projects could lead to financing environmentally-destructive ones. Finally, more ambitious targets for achieving gender equality, such as a specific rate of supported women-led SMEs, are needed.

It is a step in the right direction that project managers involved civil society in the project’s design, in order to embrace a diversity of opinions and to avoid the negative impacts posed by potential projects and to ensure that their goals are met. Moreover, the implementation of projects by national or subnational actors has a number of advantages: it enables increased country ownership of the funding and better equality and transparency. Finances are also more effectively allocated with no transaction costs and are better targeted to local institutions and harmonised with national priorities.

Both ENDS (2016): A CSO guide for engagement and local access