The European Investment Bank’s track record stands in stark contrast to its pose as a hero in the fight against climate change. 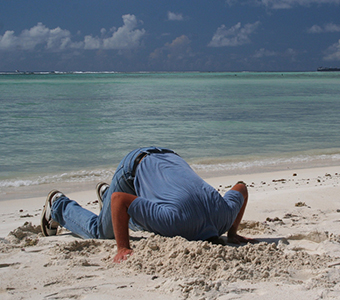 As declarations emerge from Paris about the billions and trillions of dollars needed to combat the affects of climate change, the world’s largest public lender, the European Investment Bank (EIB), is positioning itself as one of the pioneers in this effort. Together with other multilateral development banks, the EIB is posing as the vehicle to distribute these vast sums of money, and as the EU’s house bank, it has a guaranteed role to play in the bloc’s contribution to the fight against climate change, both within Europe and beyond.

But is the bank really fit for purpose? Can the EIB make a break from its history of financing fossil fuels and polluting forms of transportation after decades of cosy relations with the biggest culprits?

We look behind the façade and at the numbers and find nine reasons why the EIB is not the climate’s knight in shining armour.

According to an EIB evaluation (pdf), 70 per cent of the bank’s EUR 75 billion in climate finance between the years 2010 and 2014 was limited to just five countries: Germany, France, UK, Italy and Spain.

A closer look at the bank’s projects from 2014 that are counted as climate action reveals an even more glaring imbalance. The 13 EU Member States in central and eastern Europe (CEE) collectively received less than one per cent (EUR 42 million) of the EUR 4.5 billion the EIB lent for renewable energy within the EU in 2014. Of the EUR 2 billion for energy efficiency, only EUR 148 million (7.4 per cent) went to the CEE region. 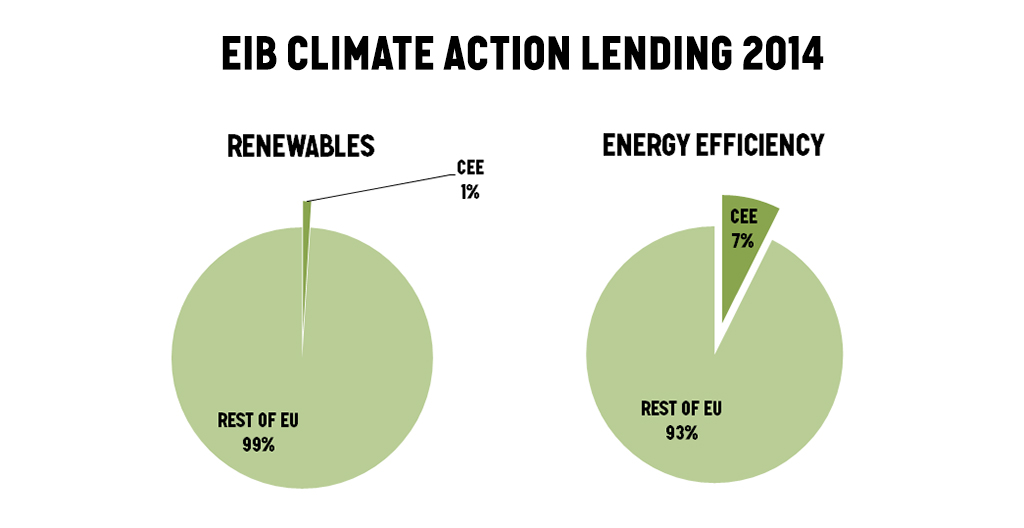 The European Commission has underlined the need to fundamentally rethink energy efficiency by introducing the Energy Efficiency First principle, i.e. to consider the potential for energy efficiency first in all energy related decisions. The EIB couldn’t be farther away from making this a guiding principle for its lending. As a cross-sectoral issue, energy efficiency measures constituted only 2.8 per cent of the EIB’s total lending in 2014. (Sources: EIB climate action lending database 2013-2014 (xls) for total energy efficiency lending; EIB 2014 Statistical Report (pdf) for the volume of signed loans.)

Despite repeated calls to transform the global transport system away from private road transport, car manufacturers received a significant 11 per cent of EIB climate finance between 2010 and 2014.

As the EIB admits:

Throwing more money at one of the most polluting modes of transportation is not the most effective form of climate finance. Adding insult to injury, car producers have actively circumvented and undermined the promised emission reduction efforts, which brings us to point four.

Since 2009 the EIB lent the Volkswagen group EUR 1.5 billion from its climate action programme to improve fuel efficiency and reduce emissions from its engines. Without more detailed information from the EIB about Volkswagen’s use of these loans, their contribution to emission reductions action is unknown. 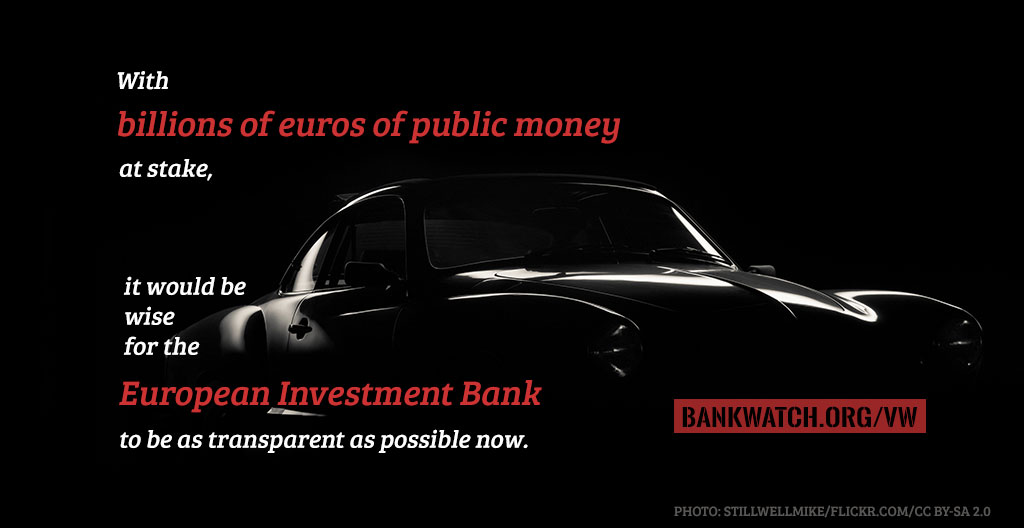 5. One hand doesn’t know what the other is doing

While the EIB boasts about being a leader in climate finance, it still supports climate damaging projects with billions of euros. The EIB’s sustainability report (pdf) approximates that projects in 2014 resulted in 4.7 million tonnes of greenhouse gas emissions, the equivalent of putting 2.35 million new cars on the road.

Between 2007 and 2014, the EIB provided EUR 3.2 billion for fossil fuel projects in sixteen countries of the European Neighbourhood Policy. Only EUR 780 million went to renewable and energy efficiency projects, the majority of which is located in just one country, Morocco. 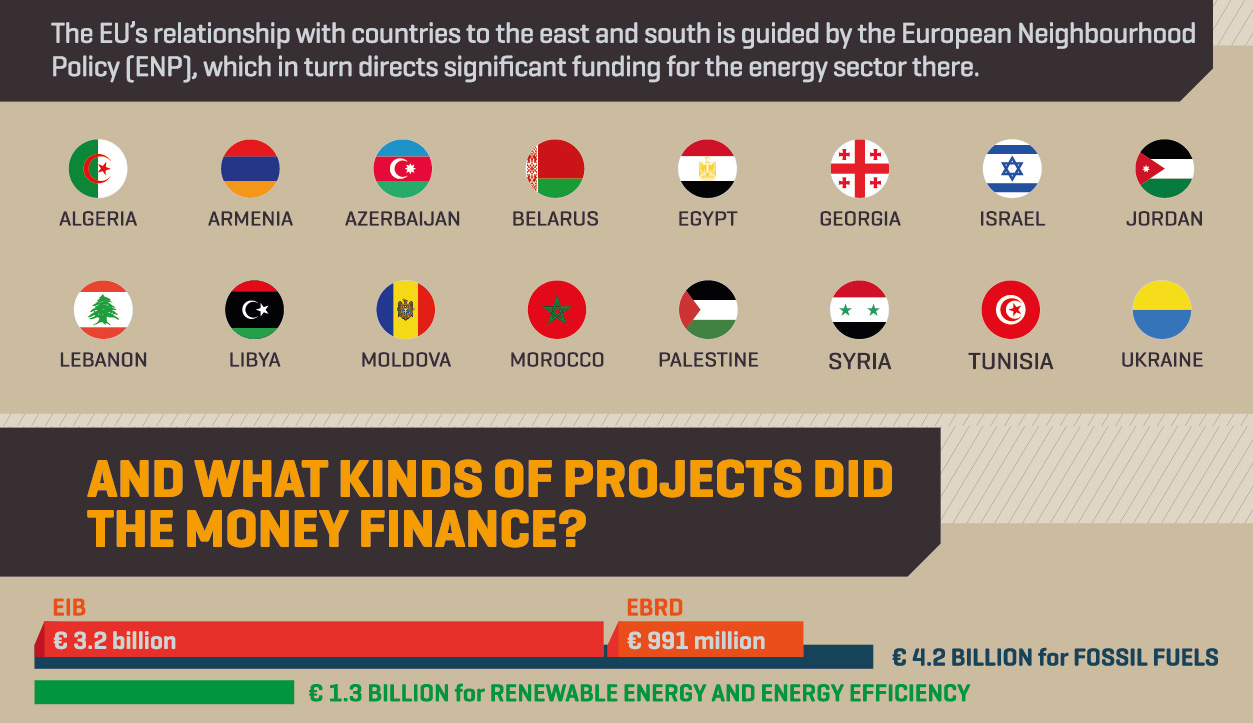 For more, see the full infographic and executive summary of a study on EU financing in the energy sector of European Neighbourhood Policy countries.

7. Turning its back on the EU’s long term climate objectives?

In its new climate lending strategy approved in late September 2015, the EIB decided to drop a reference to the EU’s 2050 low-carbon economy roadmap. Despite bank statements repeatedly naming climate action a top lending priority since 2010, the new climate strategy fails to commit to EU decarbonisation goals. 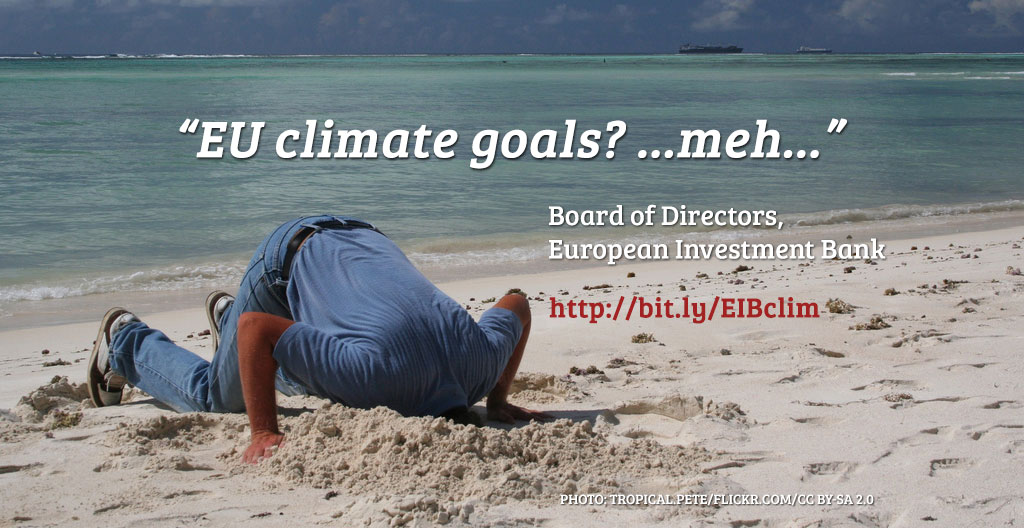 The EIB Emission Performance Standard (EPS) for the energy sector is currently set at a level of 550 g CO2/kWh. An EPS is a limit on the amount of CO2 that can be emitted by a power station. Conventional hard coal combustion results in the emission of approximately 850g CO2/kWh, while the most efficient gas power plants emit about 300g CO2/kWh.

During consultations on the EIB’s new climate policy, civil society organisations (E3G (pdf), WWF (pdf)) pointed out that this level is inconsistent with the EU 2050 climate target since it allows financing for infrastructure, like new oil-fired plants, with too high emissions to reach the 2050 target. Lying above the minimum level required (450 g CO2/kWh) to support the EU’s climate target the EIB’s EPS also lags behind similar standards introduced by the UK, the US and Canada.

This means that the bank may still finance fossil fuel-fired power plants that are less efficient than they could be.

9. Climate impact swept under the rug for one third of the EIB’s lending

Even though loans distributed through financial intermediaries, such as commercial banks and private equity funds, totalled 31 per cent of EIB lending in 2014, the bank still lacks a methodology to calculate the climate impact of this type of lending.