A Euro 2012 related road rehabilitation in Ukraine has left locals with a high speed road but no safety in their front yards. 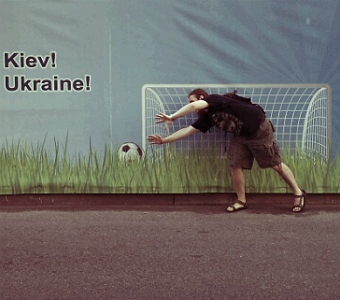 While the Euro 2012 is approaching its final, many European politicians continue to boycott matches in Ukraine to protest the treatment of former prime minister Yulia Tymoshenko. Beyond the headlines on Tymoshenko, however, Ukraine has yet more misconduct to offer that gets more easily washed away by the wave of excitement about the tournament.

I’m not talking about nuclear lifetime extension here, but about something directly connected to the Euro 2012: the rehabilitation of the Kiev-Chop road, financed with the help of two Euro 200 million loans from the European Bank for Reconstruction and Development and the European Investment Bank. The project was part of the preparations for the championships, because the Kiev-Chop highway is one of the main routes by which fans from all over Europe can reach Kiev.

But when complaints from people living next to the road appeared in the news, I decided to visit two affected villages, Bolyarka and Berezivka. What I found was that the road’s quality has definitely improved. But while car drivers might enjoy the smooth surface of the road, local people have to face dangerous, even life threatening situations every day:

Many crossroads are hardly equipped with any markings, let alone traffic lights. With no speed limit for cars, crossing the street has become a life threatening challenge of trying to avoid being run over like a frog in an arcade computer game. Some children in Bolyarka have stopped going to the school on the other side of the road because it is too dangerous to cross it twice every day. 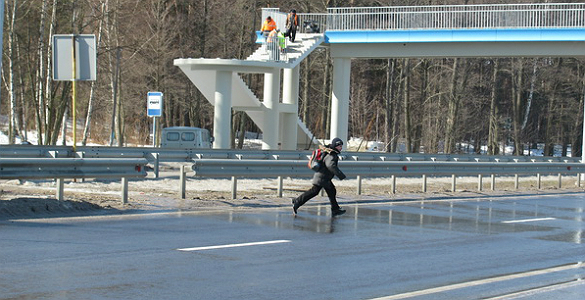 The pedestrian bridge in the background has been finally finished by now. The situation remains critical in other places.

Reaching the few crossroads that exist is not much easier. With no sidewalks, people can either risk their lives walking on the street – passed at high speed by cars and trucks – or walk through the dirt (or mud and snow in the winter). 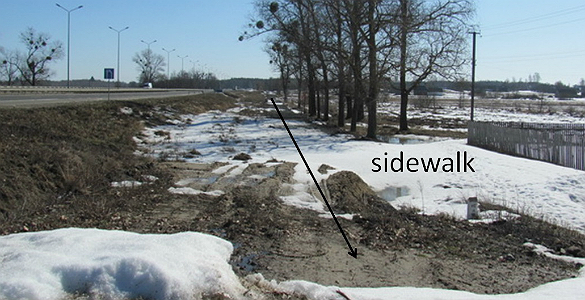 Generally, living a normal life has become impossible for some families. The new road has literally blocked the access to some private houses and land plots. People are not able to bring fuel to their homes or cultivate their gardens. 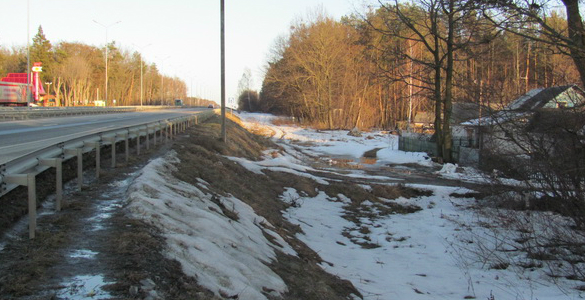 In April, we brought these problems to the attention of the EBRD and the project sponsor, the state company “Ukravtodor” (with a project briefing and a photo report (pdf)). Two moths passed, but the situation has not changed. The football celebrations continue and the road on which fans drive comfortably to Kiev is a slap in the face of the people living next to it.

It was not a shame that Ukraine didn’t reach the Euro 2012 quarter finals. The implementation of this Euro 2012 project, however, is embarrassing for our authorities and the banks that financed it.