Home > Blog entry > Bogus logic in Ukraine: A nature reserve not worth protecting

If you thought the purpose of a nature reserve is to protect wildlife from disruptive human interference, then you’re wrong – at least when it comes to nature that’s in the way of electricity infrastructure in Ukraine. 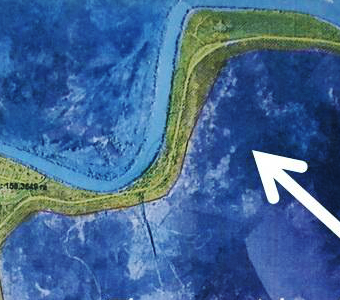 The 330 kV electricity transmission line between the substations of Novoodeska and Artsyz is planned to provide a connection between the remote southern part of the Odessa region and Ukraine’s joint power grid, bypassing the territory of Moldova. (It should be added that the transmission line would be able to transmit power that exceeds the local demand several times over. The official rationale, to supply the Odessa region with secure electricity, only conceals the ambition (UA) to connect to an electricity export route.) 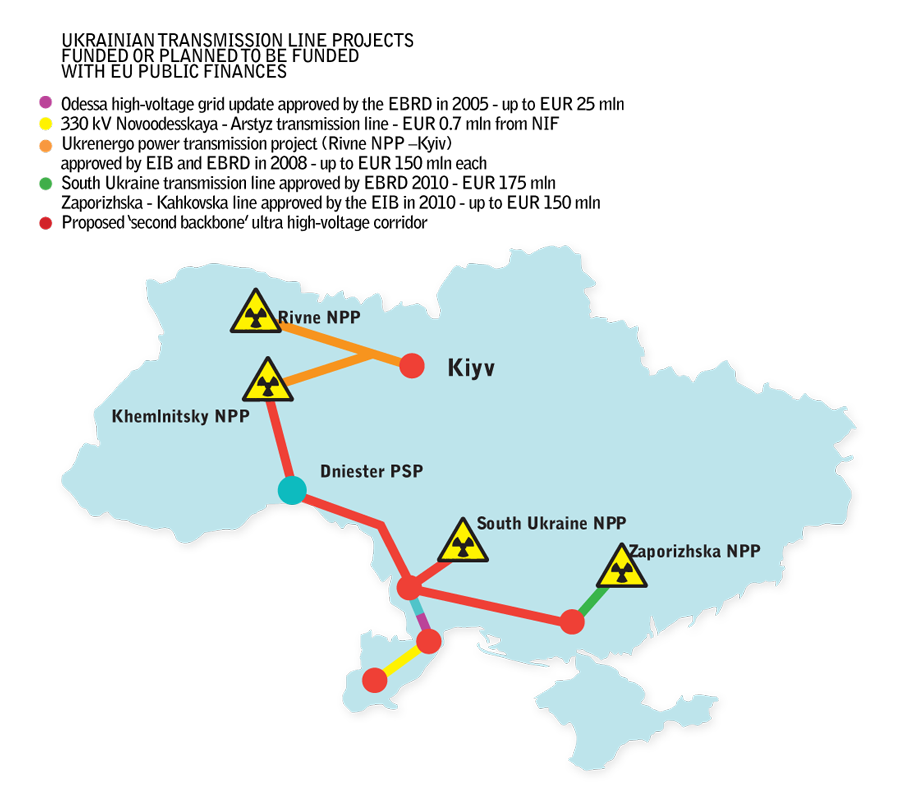 The current proposal by Ukraine’s state energy company Ukrenergo foresees construction through the “Lower Dnister” national park, an important territory for birds to breed and feed during migration. After 25 Ukrainian NGOs protested against these plans in May 2009 (pdf), the EBRD required the project sponsor to develop an alternative routing before it would further consider the project. Lacking feasible alternatives however, Ukrenergo preferred to focus its efforts on pushing the project through the national approval process.

In this quest, Ukrenergo seems to have found an important ally, for in the beginning of February the Council of the Odessa region has announced a decision to change the margins of the natural reserve “Dnister Liman”:

“To cancel the status of protected area of local importance for a number of areas in the territory of the natural reserve “Dnister Liman” […]”. (Source: Website of the Council of the Odessa Region, my own translation) 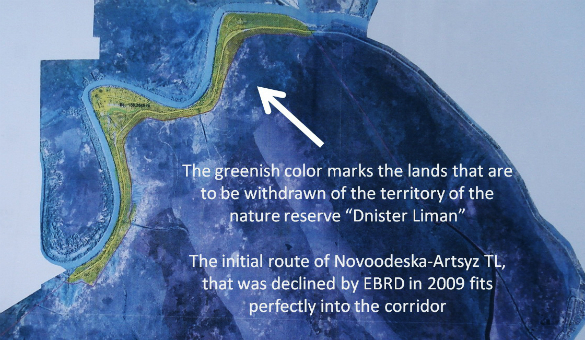 Whether this was just an extremely fortunate coincidence for Ukrenergo or was initiated by the company itself is so far unproven, but the decision is nonetheless dodgy.

It is based on a scientific justification prepared by the State Environmental Academy of Postgraduate Education and Management. Apart from containing a number of inaccuracies (in numbers, names of objects, etc), the document’s main rationale for withdrawing the natural reserve status is the already existing infrastructure (a road and an old transmission line) and the future harm from the planned transmission line:

“In the territory of the natural reserve ‘Dnister Liman’ the protected area along the route of the planned 330 kV transmission line will be exposed to negative impacts during and after construction of the transmission line”. (Source: [1], own translation)

To paraphrase that justification, it means that the nature reserve will suffer from the transmission line construction so badly that we need to cancel the status of nature reserve.

Excuse me? Then what exactly is the purpose of the status “nature reserve”?

This development is an evidence for the fact that lessons from other Ukrenergo transmission lines projects, in particular the one in the village of Usatove, have not been learned in Ukraine. Instead of looking for environmentally and socially sound alternatives that though might be more expensive or time consuming, problems are preferably solved on paper.

I only hope the EBRD doesn’t fall for Ukrenergo’s window-dressing now. After having already shown its respect towards international environmental agreements in 2009 by declining the routing of the Novoodeska-Artsyz transmission line, the EBRD should not consider financing the project based on a bogus solution.

1. State Environmental Academy of Postgraduate Education and Management, 24.11.2012, Scientific justification for changing of the margins of natural reserve “Dnister Liman” at the territory of Belgorod-Dnistrovsky district, #113.005/03