Almost all respondants to a consultation on the Plomin power plant do not want a new unit running on coal. 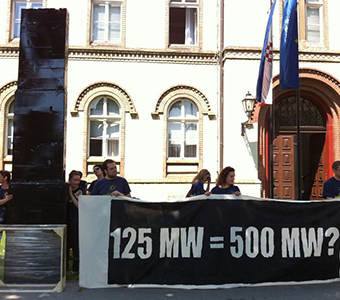 Already back in 2002 Istria County included in its spatial plan a provision stipulating that any third unit at the Plomin coal power plant must be run on gas (not coal) and that the total capacity of the plant (new unit plus existing units) must not exceed 335 MW. This should have closed the case for Plomin C before it even opened, but here we are thirteen years later still wondering what part of ‘No!’ the Croatian government didn’t understand.

In 2011 the public hearings on the environmental impact assessment study showed that the majority of people were still very much against constructing a coal plant at the location, especially one which is four times larger than the one it is replacing.

Since then numerous legal challenges have been made towards the project by NGOs, local people and the Istria County authorities, but the government has continued pushing the project forward, albeit much slower than anticipated.

In response to this, the Istria County authorities held a public consultation from 16 February – 15 March with the question:

Are you for or against the Plomin C power plant using coal as a fuel?

The results of the consultation, in which 9085 members of the public and 183 clubs and associations participated, is that 92 percent of respondents stated that they are against a new power plant using coal at Plomin.

Will the Croatian government now take the hint and stop the negotiations with potential Marubeni while it still can?