While Ukraine’s aging coal power infrastructure is causing pollution and energy loss in the country, coal-based electricity is exported at a dumping price to EU countries. 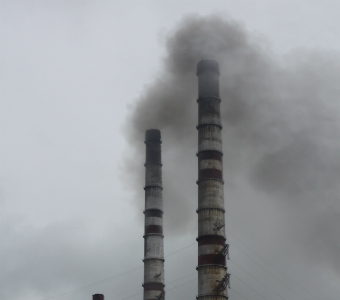 Last week I visited the Burshtyn and Dobrotvir coal power plants and the surrounding communities in western Ukraine. The power plants and the dark smoke rising from their sad chimneys have been part of the landscape for so long that they have become part of the scenery. People know that the pollution can’t be good for their health, but they don’t feel they have the power to do anything about it. And officials will tell you that they comply with their environmental permit.

While electricity is relatively cheap in Ukraine, it comes at a great environmental and health cost. None of the coal-fired power plants in Ukraine have any sulphur oxides and nitrogen oxides pollution control, while the equipment that filters ash at these plants have seen quite a few decades of operation.

At the same time, much of this electricity is wasted, with energy efficiency levels far below European standards. The amount of energy spent in Ukraine to produce 1 dollar of gross domestic product (GDP) is three times the European Union average, while Ukrainian carbon dioxide emissions per unit of GDP are the highest in Europe (Source: UKEEP, 2009). Despite these losses, coal power plants are still able to sell electricity at very low prices due to the country’s state aid regime.

In western Ukraine, the coal power plants Dobrotvir and Burshtyn are connected to the European grid and export part of their electricity to countries like Hungary, Slovakia and Romania. In 2013, Ukraine exported some 4,300 GWh of electricity (mainly to Hungary) which would be the equivalent of a 500 MW net capacity power plant operating 24 hours a day throughout the year for export only. If the 500 MW power plant were new, it would ‘only’ cause 17 premature deaths each year; if it’s Ukrainian power plants from the 70s, you can’t really tell.

These power plants wouldn’t be allowed to operate in the European Union because of their emissions, or they would have a strict deadline to close down. In some countries, their low efficiency could make their electricity so expensive that they would not be able to compete with other sources like wind power.

But because of the coal subsidies in Ukraine, EU countries can import coal-based electricity at a price 25-50% below even the domestic price in Ukraine. (In 2013 the UA domestic wholesale price for electricity was EUR 0.07 per kwh. The export price was between EUR 0.035 and EUR 0.0525 per kWh.)

Would you still pollute the air for your countrymen if the electricity you produce is not used by your people? Apparently, yes. It isn’t an easy choice. It’s a profitable business, it keeps jobs in mining and power plant operations while the premature deaths, respiratory and cardiac diseases aren’t visibly connected with air pollution from your power plant.

Should you still buy the electricity, in Hungary for example, if you knew that it comes from power plants that wouldn’t be allowed to operate in Hungary because they create too much pollution? Well, I think you shouldn’t, there’s no middle ground there.