Protests against a new Kronospan formaldehyde plant in the Romanian town of Sebes continue into their third week. Their history dates more than ten years back when the company came to modernise the local plant with financing from the European Bank for Reconstruction and Development. The ongoing demands for breathable air cast a shadow over the EBRD’s promises of sustainable development and transition. 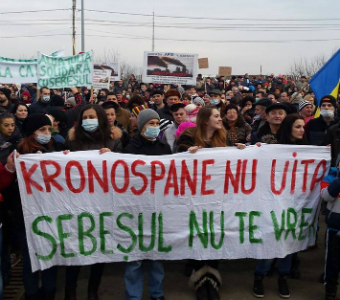 On January 11 over 2 500 people took to the streets of the Romanian town of Sebes to protest against a new formaldehyde production facility to be built by Austrian wood-based panel producer Kronospan. The protestors complained that the plant will aggravate the already soring pollution and health conditions in the city of around 30 thousand inhabitants.

Any Stefan from the local initiative PrimaNatura says the pollution has worsened in the winter season:

“The air in the city is unbreathable. During the night people can’t breathe. In December about 40 children were hospitalized with laryngitis on the same day. The city has a high cancer death rate, we see young people die of cancer.”

As a result of the protests, the Ministry of Environment halted the environmental permit approval process.

The County Court ordered the demolition of the more than a half-constructed new plant in 2009 because it had been built without the necessary environmental and construction permits.

While Kronospan runs a 30 000 tons/year urea-formaldehyde resin plant in Sebes, it intends to open a new facility that would double production. This is the company’s second attempt to open the new plant. Its first attempt fell through after the County Court ordered it to demolish the more than a half-constructed plant in 2009 because it had been built without the necessary environmental and construction permits.

The legal breaches and poor environmental record have been at the core of the opposition campaign led by locals since the company acquired the formaldehyde plant and the related manufacturing facilities from an Italian producer in 2004. The acquisition was partially financed by a Euro 135 million long-term loan from the European Bank for Reconstruction and Development (EBRD).

When presenting the investment to the public, the EBRD reassured that the facility would be compatible with EU standards and that state-of-the-art emission control system would be in place to ensure that formaldehyde emissions are kept within the allowable level limit.

Yet, in its report published in 2008 (a year after the company repaid its debt with EBRD) the local citizens initiative contended that pieces of equipment for the new formaldehyde plant came from a run-down-facility in France and that the existing plant was discharging formaldehyde at levels exceeding the limits (pdf).

Seven years onward, Kronospan has not reconciled with Sebes citizens about the new plant and measures to minimize the emissions.

While, the draft new environmental permit issued for the formaldehyde plant in 2014 conditions Kronospan to install, within 7 months, continuous monitoring equipment for formaldehyde, locals stay firm on that the plant should be located many kilometers away from the urban areas. Based on their past experience with Kronospan, they have reasons to doubt the new monitoring will bring tangible improvements to the quality of the air they breathe.

Amateur videos clearly document the clouds of smoke over Sebes.

The EBRD and Kronospan

In the meantime, the EBRD has been struggling to fix problems surrounding its loan to the same “reputable foreign strategic investor” to build a particleboard production plant in the Russian town of Ufa. The project there has taken a very similar trajectory as the project in Sebes. The Ufa citizens have held mass protests against the fact that Kronospan began construction on the plant without having conducted an environmental impact assessment and related consultations with the public or having obtained environmental and construction permits.

There is another striking similarity between the two projects – the credit from a public financial institution intended among other things to achieve transition of the countries’ industry and to provide positive influence on the restructuring and modernisation of the manufacturing.

Violations of environmental laws by Kronospan send quite an opposite message to other enterprises, however. They also raise doubts about benefits of the EBRD’s concept of transition and the Bank’s ability to oversee its client’s implementation of benchmarks.

Overall, despite of being several years ahead, Sebes has rather dark outlooks for how the situation may turn out for the inhabitants of Ufa after Kronospan will have repaid its debt with the EBRD.

For updated information on the ongoing protests in Sebes see PrimaNatura’s website.