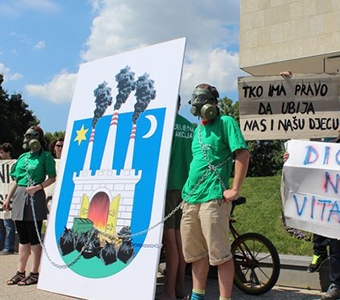 The reasons against the project were clear: the low levels of recycling and composting in Zagreb, the lack of facilities to safely dispose of the bottom ash, fly ash and filter residues, the inflexibility of such a large facility and poor previous experience with environmental enforcement in Croatia.

Whether for these or other reasons, the EBRD and later the EIB wisely avoided financing the project, with the Mayor of Zagreb confirming in late 2008 that the project would not go ahead.

Since then however, the City of Zagreb seems intent on passing a waste management plan that includes almost exactly the same measures, in spite of Zelena akcija’s best efforts to promote alternatives. The city is again holding a public consultation for a plan that looks eerily similar to the previous.

Even though Croatia must recycle 50 percent of its waste by 2020 as per EU targets and Zagreb has almost a quarter of the country’s population, the city’s new draft waste plan still has the incinerator project as its centrepiece, now – incomprehensibly – with a capacity of 400 000 tonnes per year.

This in spite of the fact that Zagreb’s annual residual waste actually dropped to around 270 000 tonnes per year for the years 2009-2013, all with a very low percentage of recycling and no serious efforts to reduce the production of waste. So imagine what would happen if Zagreb’s authorities really made an effort on recycling, composting and waste reduction.

The proposed waste management plan foresees no less than EUR 360 million for the construction of the incinerator and an ash landfill, 35 times less money for recycling and separated collection, and zero for waste reduction measures. The costs of the incinerator alone total 83 per cent of the entire budget to implement the plan, turning the waste hierarchy on its head.

The only city-wide recycling measures include an increased number of recycling containers, which enable recycling only of a few materials and have long proven to be of limited use when people must walk further to use them and have no economic incentive to do so.

The need to treat waste sludge from Zagreb’s controversial wastewater treatment plant is often cited as a reason for the incinerator, but no alternative treatments are covered in the waste management plan, nor is there an explanation of what will happen once the backlog of sludge is burned and Zagreb does not produce enough other waste to fill it. Importing other people’s waste seems like the only outcome if the burner is built.

The incinerator would create around 100 000 tonnes of ash, but there have so far been no realistic proposals of where this could be landfilled, as all suggested locations have been met unsurprisingly with fierce local resistance. It is also unclear where the hazardous fractions of the waste eg. the filter residues, would be disposed of and how much this would cost, but considering that Croatia has no suitable facilities it can be expected that this could incur considerable costs and as well raise ethical questions about leaving other countries to bear the consequences of Croatia’s waste.

The frustrating thing is that the alternatives – waste prevention, recycling, composting and mechanical biological treatment with anaerobic digestion – are available and functioning in many cities, but the City of Zagreb refuses to see this. We must move quickly beyond this impasse and agree on a waste management plan we can all live with. And that means that the City of Zagreb will have to open its ears and start listening rather than blundering blindly on with its plans.

The question here is where the international financial institutions stand. A meeting with EBRD representatives in Zagreb in May 2013 showed that the bank is aware of the imperative of solving Zagreb’s waste problem and is interested in supporting the city’s efforts. But will it silently follow the City of Zagreb’s increasingly absurd plans or help it finally develop a waste management system we can be proud of?