After long delays and more than 3 years of preparation the European Bank for Reconstruction and Development has finally completed and published a policy for its operations in the mining sector. Both the consultation process and the final outcome must leave “the consulted stakeholders” disappointed. 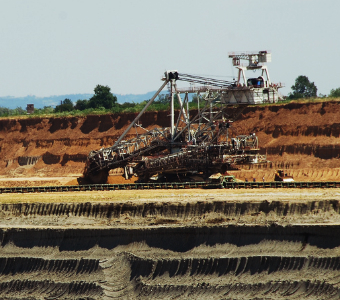 Those who have followed our work on the EBRD’s mining activities are aware of our discontent about the bank’s performance in the mining sector – with problems ranging from deepened commodity export dependence and the exacerbation of environmental problems to negative impacts for local communities.

Now with the mining policy approved we remain similarly unhappy: Compared to the draft version from April (pdf) (subtitled “Supporting Responsible Mining”), the final policy (pdf) did not change much (the subtitle disappeared, though). Most notably, the policy fails to incorporate the obvious links between its support for coal mining activities and the climate impacts of burning coal.

A host of other important issues, including the protection of important natural areas (like glaciers), the diversification of export oriented economies, and the strengthening of transparency, participation and revenue sharing in mining activities have been postponed to the revision of other policies and strategies. (Read more details in our commentary on the new mining policy.)

Despite the bank’s bold claims of an exhaustive consultation process the outcome does not sufficiently “incorporate differing views”. Bankwatch’s extensive and sound comments on the draft policy have hardly found their way into the final document – without so much as an explanation.

This mining policy is decidedly failing to lay the groundwork for less harmful EBRD mining operations. It hardly describes anything else than an expanded business as usual. Neither does it offer a vision to align the interest of local people and the environment with the commercial benefits for mining corporations.